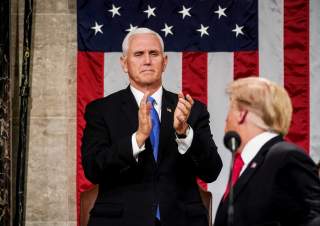 It isn’t too soon to start thinking about who will succeed Donald Trump. Win or lose in 2020, attention will quickly turn to who might pick up his populist/nationalist mantle. The question is broader than who will be the GOP presidential nominee four years hence. Who will lead and shape the conservative movement in the future?

It is easier to say who should not try to step into the president’s place: Vice President Mike Pence.

He is a “good guy,” as former vice president Joe Biden put it, before turning tail and deciding that politics today can accommodate no hint of civility. However, Pence is a standard-issue hawk. He appears to have absorbed none of President Trump’s reluctance to intervene militarily and keep America in a perpetual state of war.

The vice president made that clear in his recent speech at West Point. Much of what he said honored cadets for the unique education they received and commitment they made. He also emphasized his family’s connection to the military, as the son and father of those in uniform.

However, when he laid out his foreign-policy vision it was of constant conflict. Declared the vice president: “you are taking up your duties at a time of growing challenges to freedom all around the world. . . . And now you are going to join the fight.” As a result, “It is a virtual certainty that you will fight on a battlefield for America at some point in your life. You will lead soldiers in combat. It will happen.”

Ironically, when spelling out the qualities that the officers-to-be in front of him required to “lead heroes,” Pence included humility. Yet the agenda he offered is suffused with arrogance, the assumption that Washington is capable and entitled to remake the globe. All of it.

This is quite an agenda. But it is not President Trump’s agenda.

Instead, the vice president has combined the wish lists of John Bolton, Steve Bannon, Lindsey Graham, Mike Pompeo, and a gaggle of other neoconservatives, liberal interventionists, and uber-hawks. The only real surprise is the absence of Iran on the target list. Perhaps the vice president thought doing so would embarrass the president, who regularly criticized Middle East misadventures and recently declared that he did not want to fight a war against a country bigger, more populous, and better prepared than Iraq.

The president likes to talk tough, but he has mostly kept the troops at home. He warned against the hubris which long characterized U.S. foreign policy: “Logic was replaced with foolishness and arrogance, which led to one foreign policy disaster after another.” While running for president he promised that “unlike other candidates for the presidency, war and aggression will not be my first instinct,” instead promising “caution and restraint.” He even criticized Hillary Clinton for being a warmonger. “Great powers do not fight endless wars,” he insisted in his most recent State of the Union address.

The president shocked Republicans, and especially the Bush clan, by denouncing the disastrous Iraq War. He explained: “They went into Iraq. They destabilized the Middle East. It was a big mistake. Okay, now we’re there. And you have ISIS. And I said this was going to happen.” Indeed, Trump had a better understanding of the consequences of that conflict than did most members of Ben Rhodes’s infamous “Blob,” or Washington foreign-policy community.

Trump saw no triumph: “We tore up what institutions they had and then were surprised at what we unleashed. Civil war, religious fanaticism, thousands of American lives, and many trillions of dollars, were lost as a result. The vacuum was created that ISIS would fill. Iran, too, would rush in and fill that void, much to their unjust enrichment.”

The president made clear he was no fan of nation-building elsewhere. “It all began with a dangerous idea that we could make Western democracies out of countries that had no experience or interests in becoming a Western democracy,” he argued. “We have a country that’s in bad shape,” he reasonably allowed: “I just think we have to rebuild our country.” Regarding the bipartisan, hyper-interventionist foreign policy followed by both sides, he argued “We certainly can’t afford to do this anymore.”

No surprise, Trump said he wanted out of Afghanistan and would stay in Syria only as long as necessary to defeat the Islamic State. Even in the latter he said, “I would put tremendous pressure on other countries that are over there to use their troops.”

Even before running for president, he criticized Washington’s Asian, European, and Middle Eastern allies for leaving Americans to carry a disproportionate defense burden. Of NATO, Trump observed, “The countries we are defending must pay for the cost of this defense, and if not, the U.S. must be prepared to let these countries defend themselves. We have no choice.” He explained: “Pulling back from Europe would save this country millions of dollars annually. The cost of stationing NATO troops in Europe is enormous.”

Regarding Ukraine, the president observed that it “affects us far less than it affects other countries in NATO, and yet we’re doing all of the lifting.” And he asked: “Where’s Germany? Where are the countries of Europe leading? I don’t mind helping them. . . . But why isn’t Germany . . . leading this charge? Why is the United States?”

He thought much the same about the Middle East. For instance, he complained, “We spent billions of dollars on Saudi Arabia and they have nothing but money.” That did not end his criticism of the pampered royals. He termed Riyadh the “world’s biggest funder of terrorism,” complaining that “Saudi Arabia funnels our petro dollars, our very own money, to fund the terrorists that seek to destroy our people while the Saudis rely on us to protect them.”

Similarly, he contended, “South Korea is very rich, great industrial country, and yet we’re not reimbursed fairly for what we do.” Indeed. As Trump further explained: “I keep asking, how long will we go on defending South Korea from North Korea without payment?” He noted that when “the young man from North Korea starts acting up and having one of his fits, we immediately get our ships going. We get our aircraft. We get nothing for this.” The cost appeared to spark his interest in diplomacy. Trump praised Dennis Rodman’s trip to North Korea: “Maybe it’s not the worst thing that somebody actually calls.”

He is no recent convert. In 1987, he called on the United States to “stop paying to defend countries that can afford to defend themselves.” Trump advocated that we “let America’s economy grow unencumbered by the cost of defending those who can easily afford to pay us for the defense of their freedom.” In this belief he never has wavered.

Although he proclaimed that he was the most militaristic candidate, he obviously didn’t really believe that. Once he seemed to be channeling John Quincy Adams: “The world must know that we do not go abroad in search of enemies, that we are always happy when old enemies become friends and when old friends become allies, that’s what we want. We want them to be our allies.”

Even worse for Washington insiders, candidate Trump said the next president should not fill his administration with those who advocated war in Iraq. In some cases the president was said to veto appointments of necons who had made him a political punching bag. Left out in the cold were imperial wannabes, ready to run the world.

These views set off much wailing and caterwauling, punctuated by the gnashing of teeth, among those who had dominated GOP foreign policy at least since 9/11. Trump would “destroy American foreign policy and the international system,” complained uber-hawk Max Boot. Scores of Republican foreign policy practitioners wrote open letters denouncing Trump for being insufficiently militaristic.

Obviously, Trump has honored many of his promises only in the breach. In some cases his switch has been breathtaking—from chief critic to PR manager for the Saudi royals. His staffing decisions, choosing those who share few if any of his beliefs, often reflect the bizarre. Even where he has consistently proposed bringing forces home, he has allowed his staff to browbeat him into submission. Foreign governments have proved to be particularly adept at playing him, convincing him that he had forced them to adapt significant reforms while they have done very little—essentially the European strategy.