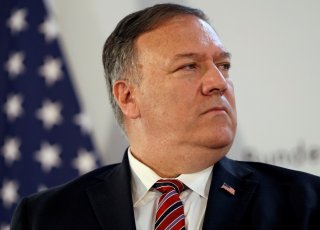 Secretary of State Mike Pompeo has traveled to the United Nations headquarters in New York to activate “snapback,” a controversial legal mechanism that could spark a global showdown over Iran, the State Department announced.

The international community had lifted economic sanctions on Iran as part of a 2015 deal to regulate the Iranian nuclear program, and the UN Security Council voted down a resolution to restore these sanctions last week.

But the Trump administration is now claiming the right to snap back the sanctions automatically, an interpretation that Russia, China, and European nations disagree with.

Pompeo told Fox News on Wednesday night that the United States would begin enforcing sanctions within 30 days, with or without international approval.

“When we’ve seen any country violate our current sanctions, the current American sanctions, we’ve held every nation accountable for that,” he said. “We’ll do the same thing with respect to the broader UN Security Council sanctions as well.”

The Trump administration claims that snapback is necessary because the UN arms embargo on Iran will expire in October, allowing the Islamic Republic to buy advanced weaponry from Russia and China.

“The Iranians won’t have the chance to have Russian air-defense systems, Chinese tanks, all the things that pose risk and instability in the Middle East,” Pompeo claimed. “The Gulf states are all excited about—Israel is excited about it.”

Russia and China, however, claim that the United States has no right to extend the arms embargo or snap back other UN sanctions on Iran. European nations have said the same thing.

Any “participating member” of the 2015 deal can activate snapback. The Trump administration left the deal in 2018, but still claims the right to snap sanctions back.

U.S. envoy Brian Hook has claimed that the word “participant” is not “defined in a way to require participation.”

Iranian officials say that snapback would spell the end of the deal, and have even hinted that they could leave the nuclear Non-Proliferation Treaty and assert their right to a nuclear weapon if international sanctions are restored.

U.S. policymakers were divided over the move along party lines.

“A snapback of sanctions would make the region and the world safer,” Senate Foreign Relations Committee chair Jim Risch (R–Idaho) said in a statement. “The international community must resist the urge to postpone this necessary action yet again.”

House Foreign Affairs Committee chair Eliott Engel (D–N.Y.) had said in May that the Trump administration should restore the arms embargo on Iran “not through snapback or going it alone, but through a careful diplomatic campaign.”

“If Joe Biden is elected president, he would seek to build on the nuclear deal to make it longer and stronger if Iran returns to strict compliance,” Blinken added. “We would be in a position to use our renewed commitment to diplomacy to work with our allies…to effectively push back against Iran's other destabilizing activities.”