The Myth that Won’t Die: Donald Trump as Russia's Puppet 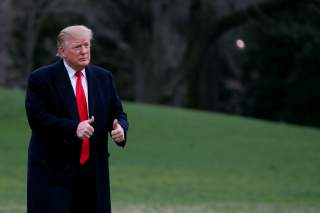 Donald Trump’s political adversaries, along with an assortment of Russia haters in the foreign-policy community and the news media, keep pushing the narrative that Trump is Vladimir Putin’s puppet. That allegation shows few signs of dissipating even though no credible evidence supporting it has emerged. Unfortunately, the situation is unlikely to change even though Special Counsel Robert Mueller’s investigation concluded that the Russian government’s meddling in the 2016 presidential election did not entail collusion with the Trump campaign.

Yet, shrill allegations of treason have been commonplace, reaching a crescendo following last year’s Trump-Putin summit in Helsinki, when the president made some highly favorable comments about his Russian counterpart. The innuendos and outright accusations persist. And despite the bland outcome of the Mueller investigation, congressional Democrats, most notably House Intelligence Committee Chairman Adam Schiff (D-CA), insist that they will continue to investigate the “Russia collusion” angle.

Russophobes seem to believe that if they repeat an absurdity often enough, it somehow becomes true. The myth that Trump has been Putin’s puppet falls into that category. Trump did commit the apparently unpardonable sin during the 2016 campaign of advocating better relations with Moscow, and he was guilty of using effusive diplomatic language at Helsinki. But if one examines his administration’s actual policies toward Russia, the notion that he is “doing Putin’s bidding” or even pursuing an appeasement policy evaporates.

Critics who contend otherwise need to cite specific Trump administration policies that Putin welcomes. It would be a very difficult task.

It certainly would not be Russian enthusiasm about Trump’s decision to end U.S. adherence to the Intermediate Nuclear Forces (INF) Treaty. The Kremlin reacted firmly to that action and warned that Washington’s withdrawal from the INF Treaty would compel Russia to develop new missiles; in response, Russia would resume targeting U.S. bases in Europe and important assets of America’s NATO allies. That is a curious reaction from Putin if his aim was to prompt his puppet to take that step.

It is also unlikely that Russia is happy about the Trump administration’s approval of two major arms sales to Ukraine. The latter sale in spring 2018 even included Javelin anti-tank missiles. Since Moscow backs a secessionist war in eastern Ukraine and is on very bad terms overall with the government in Kiev, the U.S. decision to boost the military capabilities of Russia’s nemesis is a hostile act, not one of appeasement. Indeed, it is a step that Barack Obama pointedly refused to take. A similar escalation of Washington’s support for Kiev is evident with the Trump administration’s program to to train Ukrainian troops.

Given the Kremlin’s hostility to the expansion of NATO’s membership (a stance that existed even before Putin became president), Trump’s alleged master cannot be pleased that his agent endorsed the admission of Montenegro to the alliance and is adopting the same view of Macedonia’s impending bid. Such expansion probably is even more galling since it continues Washington’s contemptuous attitude regarding Russian political, cultural and economic interests in the Balkans—a policy that goes back well into the nineteenth century. Moscow must be even more unhappy about the Trump administration’s failure to back off from Washington’s stated goal to bring Georgia and Ukraine into NATO—a move that Russians across the political spectrum regard as an intolerable provocation.

It would be peculiar if Putin was pleased about the frequent rotating deployments of U.S. warplanes and military personnel to NATO members on Russia’s border. Indeed, the rotations are now so frequent that they amount to an ongoing U.S. presence in all but name. That development is combined with an intensification of both the number and size of NATO exercises (war games) in both Eastern Europe and the Black Sea adjacent to Russia. Given the reports that U.S. officials are now in serious negotiations with Warsaw to build a permanent military base (which the Polish president offered to name “Fort Trump” in a transparent appeal to the U.S. president’s notorious vanity) in eastern Poland near the border with Russia; Putin’s “puppet” appears to be out-of-control.

That problem also is apparent with respect to Trump’s treatment of Moscow’s would-be allies and client states. Russia has deployed its own military forces to Syria to help Bashar al-Assad retain his precarious hold on power. Yet Trump has continued to back opposition forces, and he launched missile strikes against Assad’s air force in response to his regime’s supposed use of chemical weapons. Other attacks on Syrian government positions have apparently killed approximately two hundred Russian nationals working as contractors and mercenaries.

The Kremlin has pursued a policy of trying to forge close economic and even military ties with Venezuela’s leftist government headed by Nicolas Maduro. Conversely, the Trump administration has clearly embarked on a regime-change campaign to oust Maduro. Trump himself has insisted that all options (implicitly including a military intervention) remain on the table regarding that goal. It’s hard to square such an aggressive stance toward Russian clients like Assad and Maduro with the actions of someone dedicated to appeasing Moscow, much less someone operating as a Russian agent.

It is long past time to scorn the “Trump is Putin’s puppet” allegation for the preposterous myth that it is. In reality, the Trump administration has pursued a disturbingly hardline policy toward Russia, deepening an already worrisome new cold war. It is uncertain whether Trump’s stance is an effort to fend-off accusations of treason or if it merely reflects a dangerous herd mentality in Washington about relations with Moscow. In either case, the outcome has fomented unnecessary, potentially very dangerous, bilateral tensions. If Trump’s domestic political adversaries have integrity and a sense of responsibility, then they will acknowledge that the Mueller investigation did not find proof that Trump colluded with Russia, and they will immediately abandon that ugly, false narrative.

Ted Galen Carpenter, a senior fellow in security studies at the Cato Institute and a contributing editor at the National Interest, is author of twelve books and more than eight hundred articles on international affairs. His latest book is Gullible Superpower: U.S. Support for Bogus Foreign Democratic Movements.