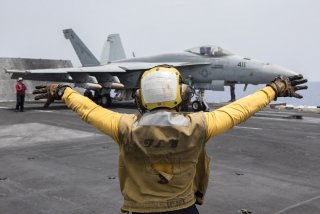 Decisionmakers in the national security community often seem to gravitate toward military solutions, whether or not the situation calls for it.

“They want to explode a bomb in the desert to show how scary it is,” said Laicie Heeley, CEO of Inkstick media, and host of the Inkstick and PRX podcast Things That Go Boom. “They want to make a big show of force that is credible and accountable. And there’s value to those strategies when they are not the only strategy. But we have to be thinking about the best way to solve each problem in the best way for that problem.”

Speaking in-depth with Ploughshares Fund Program Director Michelle Dover on this week’s episode of the Press the Button, Heeley emphasized that there’s never one solution for everything—especially when it comes to national security.

As a foreign policy expert, Heeley thinks of national security in broader terms than her field always readily accepts, a field she works to illuminate, popularize, and change.

At the beginning of the latest season of Things That Go Boom, Heeley and her team set out to explore what many were calling a new era of foreign policy, a return to great-power competition, the Pentagon’s shift back from a primary focus on terrorism since 9/11 to a focus on China, Russia and other “great powers.” This grand reordering of American military, economic and diplomatic behavior seemed to follow the pattern of identifying an adversary, bringing the fight to them, and leaving little room to focus on anything else.

When the pandemic hit, it clarified her reasons for questioning this term and its foundation and implications. “We really dug deeper, I think, then we might have had we not had this major event in front of us to really remind us that that was what we were living with and that we had. We had perhaps prioritized wrong for many years,” said Heeley.

By way of example, Heeley said the United States is looking for offensive counter-attack solutions to disinformation. A broader view of national security might recognize that increasing resilience at home could address the problem of disinformation more directly and efficiently, and with far less damage to national and international civil discourse and intellectual freedom. “If our security was more than just weapons and wars, what should we be focused on, what did we need to be thinking about,” was the question Heeley sought to explore.

Nuclear weapons are another area ripe for reevaluation, especially when it comes to deterrence as the bedrock of nuclear weapons policy. Heeley described how historically government decisionmakers, often white men, “[think] about deterrence as the great savior, the thing that’s going to stop all wars in the future and prevent ever having a nuclear war again. We’re really just relying on it without a whole lot of evidence to be that fix-all, really putting ourselves in a very vulnerable position,” said Heeley.

This narrow view of national security is exacerbated by a lack of inclusiveness in the field. Heeley’s work is to make national security “a better space for everyone,” because she is concerned with “foreign policy by and for a broader and more diverse range of voices.” As Heeley said, “we are really hoping to shift the conversation to a place where we can have conversations about that broad range of lived experiences.”

The entire interview with Laicie Heeley is available on Press the Button.

Ploughshares Fund is a proud longtime supporter of Inkstick Media and Things That Go Boom. Will Lowry is Digital Communications Manager at Ploughshare Fund.