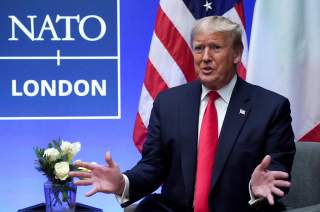 President Donald Trump returned early from the London NATO summit. Staged to satisfy British Prime Minister Boris Johnson—the official 70th-anniversary meeting was held in April—the latest gathering featured only one, mercifully short, session, to reduce the likelihood of a Trump eruption. Even so, before arriving he improbably chided French President Emmanuel Macron for being “nasty,” “insulting,” and “disrespectful” in suggesting that the alliance suffered from “brain death.” Then the session’s minimal substance was overshadowed by the president’s personal spat with Canadian Prime Minister Justin Trudeau.

Of course, the assembled leaders filled their limited time together with happy talk. The greatest alliance ever is more necessary than ever as Europe faces the greatest security challenges ever. The Europeans are spending more and cutting Washington’s burden. NATO is preparing plans both to defend its members from conventional attacks and confront new threats. The Europeans even are ready to tackle the huge new challenge posed by increasingly aggressive China. All in all, the alliance is prospering greatly.

This is fantasy. A very pleasant one. But fantasy nonetheless.

NATO was formed in 1949 to shield European states from Soviet aggression as they recovered from World War II. The U.S. was only supposed to assist European governments in their defense efforts. For instance, Secretary of State Dean Acheson promised Congress that it would not need “to send substantial numbers of troops over there as a more or less permanent contribution.” Dwight D. Eisenhower, past wartime allied leader, first NATO commander, and future Cold War president opposed providing a permanent U.S. garrison which, he predicted, would “discourage the development of the necessary military strength Western European countries should provide themselves.”

Alas, these sentiments were ignored as the U.S.S.R. tightened its control over Central and Eastern Europe. The Europeans recovered economically but failed to increase their defense outlays accordingly. Washington maintained its dominant military presence while constantly urging its allies to do more. They routinely said yes but did little.

After the Warsaw Pact and the Soviet Union dissolved NATO’s survival seemed uncertain. So officials suggested that the transatlantic organization shift to, in former Deputy Secretary of State Robert Zoellick’s words, “new missions that will fit the new era.” For instance, Robert Hormats, another lengthy public official, proposed that NATO shift to promoting “student exchanges, to fighting the drug trade, to resisting terrorism, to countering threats to the environment.” David Abshire, onetime U.S. ambassador to NATO, suggested coordinating “the transfer of environmental-control technology to the East.”

Ultimately the alliance decided to expand its membership, even though the enemy had disappeared. Doing so violated multiple assurances given to Moscow. NATO also initiated “out-of-area” activities, which meant defending other than member states. This ironically turned the pact into an offensive instrument, first used to dismember Serbia in 1999. In essence, NATO had gone from a means to an end, with war the new means. Said Sen. Richard Lugar, then chairman of the Senate Foreign Relations Committee, the organization would “go out of area or out of business.” And, as public choice economists would predict, no one involved in the alliance wanted the latter.

The Soviet Union’s collapse triggered European disarmament, which in turn intensified American demands for greater burden-sharing, which the Europeans continued to ignore. The process continued for years, demonstrating, perversely, that the less Europe did the more America would. Hence the bizarrely named “European Reassurance Initiative” after Russia’s intervention in Ukraine: the Europeans were essentially promised that even if they did nothing Washington would remain at their side—though whining all the way. U.S. policymakers appeared to accept the need to subsidize the Europeans in order to keep them dependent. Washington opposed any proposals for independent spending and action, preferring that Europe do more, but only under America’s direction.

The alliance continued to add members. Most recently it accepted Montenegro, with North Macedonia awaiting treaty approval by the 29 current members. Next up, the Duchy of Grand Fenwick, featured in the novel The Mouse that Roared!

The latest out-of-area wars have been distant, unconventional conflicts: Afghanistan, Libya, and Syria, of which the latter triggered French President Emmanuel Macron’s complaint about a lack of allied coordination. Some NATO fans call the organization a “global alliance,” presumably ready to act as global cop. In every case, of course, the heavy lifting inevitably falls on Washington.

Every recent president criticized Europeans for failing to make sufficient contributions for the common defense. Defense Secretary Robert Gates suggested that the alliance itself was at risk, since “there will be dwindling appetite and patience in the U.S. Congress, and in the American body politic writ large, to expend increasingly precious funds on behalf of nations that are apparently unwilling to devote the necessary resources ... in their own defense.” President Trump expressed similar sentiments, though more crudely.

Alas, the burden-sharing debate is unproductive. The issue should be burden-shedding. Even when President Trump does the right thing, he does so badly. So it is with NATO. But the alliance’s “brain death” reflects its inherent problems, not his dreadful management.

Quite simply, it makes no sense for U.S. taxpayers to subsidize the defense of nations capable of defending themselves. Shared interests will continue to justify military cooperation. However, the alliance as today constituted no longer serves American interests.

NATO’s problems are many and fundamental.

First, America and Europe no longer face an existential threat, let alone a common one. Which makes united action by such a diverse membership so difficult. Russia is no Soviet Union. Vladimir Putin is no Joseph Stalin. The Russian Federation is an unpleasant actor but has reverted to a pre-1914 great power, insisting on border security and international respect. There is no prospect of a Russian attack on the U.S. and little more chance of one on Europe, Old or New. Although plausible, even a successful grab of the Baltic States would yield little benefit for much cost.

Russia’s, Europe’s, and America’s interests often clash—they understandably have different perspectives on economic predominance in Ukraine and political predominance in Syria, for instance—but most such issues are of only limited importance. Even the disputes over Georgia and Ukraine are peripheral matters for Europe and America. However, the latter is existential (in the case of the latter) security concerns for Russia.

NATO expansion moved the transatlantic alliance a thousand miles eastward; Western-backed “color revolutions” placed unfriendly governments in neighboring states; Ukraine was heartland territory for the Russian Empire and the Soviet Union; and Crimea, transferred in 1954 to Ukraine as part of an internal Soviet political deal, contains the important Black Sea military base at Sebastopol. Moscow views its “near abroad” rather like Washington views Latin America. The U.S. officially does not believe in spheres of interest, but the Trump administration reacted badly to Russian involvement in Venezuela. The president said: “Russia has to get out.” Then-National Security adviser John Bolton announced: “We strongly caution actors external to the western hemisphere against deploying military assets to Venezuela, or elsewhere in the hemisphere, with the intent of establishing or expanding military operations.”

Thus, Moscow’s behavior, though unjustified, is essentially defensive toward the West. That conclusion is backed by Russian military deployments. Mike Kofman of Harvard University’s Belfer Center argued: “Despite provocative air and naval activity concentrated in the [Baltic] area Russian forces base there are principally defensive, and aging to boot.” Despite increasing indications that the Putin government might be interested in reducing tensions over Ukraine, the allies have yet to offer the one concession that might cause Russia to moderate its behavior: the end of NATO expansion.

Second, most Europeans don’t appear to fear for their security. Despite the public hysteria surrounding Moscow’s often unsavory behavior, few Europeans worry about Russia. The Baltics and Poland express a different perspective, yet their military spending, around two percent of GDP, remains paltry if they truly believe their independence to be at stake.

The continent faces other modest security issues, primarily emanating from the Middle East and North Africa, but few are susceptible to a military response and none require a larger European military. France and the United Kingdom have greater international interests related to their colonial past, but even their willingness to intervene is declining.

Earlier this year former U.S. ambassadors Douglas Lute and Nicholas Burns made the astonishing claim that NATO’s problems “represent the most severe crisis in the security environment in Europe since the end of the Cold War and perhaps ever.” More than in September 1939? August 1914? During the Napoleonic Wars and French Revolution? German Chancellor Angela Merkel was only slightly less hysterical in declaring: “Maintaining NATO today is even more in our own interest than it was in the Cold War—or at least as important as it was in the Cold War.” In fact, Europe may be more secure than ever before.

Third, significant military spending increases—as opposed to incremental movement by some states toward NATO’s two percent objective—are unlikely. Even Secretary of State Mike Pompeo admitted that when he asks Europeans to do more, “they say ‘It’s tough. Our voters just really don’t like to spend money on defense’.” This is an eminently sensible response, given the absence of a serious threat and Washington’s oft-demonstrated determination to defend the continent, no matter what. As a share of GDP European military expenditures, last year ran 1.51 percent, the same in 2012.