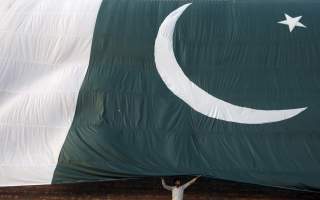 In the midst of scorching summer heat, multiple suicide bombings and dramatic arrests of Pakistan’s ex-premier Nawaz Sharif and his daughter on corruption charges, the country witnessed a historic general election in late July. A relatively new player in the political arena, the Pakistan Tehreek-e-Insaf (PTI) party—or “Movement for Justice”—led by Pakistani cricket legend Imran Khan came out victorious overall, tumbling entrenched political dynasties in strongholds across north and south and in the wealthiest and most populous province, Punjab.

In the charged political environment leading up to the election, opposition parties voiced concerns about the fairness of the electoral process, hinting at the “invisible hand” of the country’s strong military establishment secretly supporting Khan. These concerns were not ill-founded. An independent-observer mission of the EU overseeing the process noted a “lack of equality of opportunity” for all political parties in the lead-up to the election. Nevertheless, neutral observers including the EU mission observed no evidence of rigging on election day. Whether the establishment influenced the pre-election process in a significant manner will likely remain uncertain. However, the overwhelming feeling in the country is one of relief and hope for a fresh start with a clean slate.

Khan rode the anti-corruption populist wave for more than two decades. His first breakthrough came in the 2013 election when his party won a majority in Khyber-Pakhtunkhwa (KP), considered to be one of the country’s difficult provinces to govern, and which borders Afghanistan. Five years later, his party again claimed victory in KP, largely by delivering on two promises: running a clean government and transforming hospitals and schools. This was made possible because technocrats and educated Pakistanis joined Khan’s call for “justice across the board” and transitioned from passive political spectators to change-seeking lawmakers. Altruism, a concept that seems to be alien to most political leaders in the subcontinent, also reigned supreme in KP during Imran Khan’s governing.

Perhaps the victory was due to the combination of the performance of Khan’s party in KP and its appeal for a corruption-free, “new Pakistan”—a cornerstone of Khan’s campaigns—that rallied an overwhelming number of women, youth and expats around him. Widespread media awareness acted as a catalyst. Women, who comprise 44 percent of the electorate, historically self-exclude from the election process due to societal and cultural constraints on mobility and political activism. But they turned out to vote in unprecedented numbers, many for the first time.

What might America’s policy toward Pakistan look like? On terrorism, Khan espouses an overall pacifist outlook, vehemently opposing U.S. drone strikes and calling for dialogue with extremist elements as the only way to achieve peace. Yet his party’s governance in KP shows he is likely to be flexible. Pakistan’s all-powerful military establishment has taken a hard line on terrorism in recent months, and Khan’s campaign rhetoric will probably self-calibrate once the work of statecraft begins.

Mindful of the support his party will need from the opposition, Khan’s victory speech was unifying in tone and tenor—and it was received with cautious optimism locally and globally. Highlights of his post–election address included announcing he would not move into the lavish prime minister’s house, reserving it instead for public use; affirming that the rights of the country’s most oppressed would be protected, and striking a conciliatory tone toward India. In foreign policy, he emphasized improved relations with India and Afghanistan, where a nascent peace process is inching forward. Regarding the controversy surrounding the fairness of the election, Khan said that he would “reopen all constituencies” where the opposition had reservations, a right his party fought hard for in the 2013 general election.

China was one of the first countries to officially acknowledge PTI’s victory and reciprocate Khan’s stated goal of continued Pakistan-China relations, calling the electoral process “smooth” and saying Beijing was ready to work with the new government. The previous government in Islamabad had made considerable progress on the $62 billion China-Pakistan Economic Corridor, encompassing infrastructure and energy projects as part of China’s global Belt and Road initiative (BRI).

While America has been voicing concerns about the destabilizing potential of BRI, particularly in Africa, Pakistan needs the economic stability that BRI could bring if it is to combat terrorism. Given that context, America might have a reason to consider whether to be supportive of the corridor there.

Given the ongoing peace process in Afghanistan, Pakistan and the United States should be searching for ways to cooperate to achieve their common objective of ridding the region of extremist elements. In the past, relations between new governments in Afghanistan and Pakistan invariably started out cordially. They then deteriorated as Pakistan’s internal contradictions over the role of terrorist groups surfaced—the army seeking to support the activities of these groups in Kashmir, while elected representatives sought to shut them down. If Khan is to avoid repeating past trends in his country’s relationship with Afghanistan, then he will likely need a supporting hand from the United States. This will require a more diplomatic approach by the United States than the current confrontational stance that threatens to fracture this fragile alliance.

The United States could do even more. Pakistan is the world’s fourth-largest democracy. This is the third election in a row that elected representatives have completed their full five-year terms. With each election cycle, the democratization of Pakistan deepens, making a return to martial law more unlikely. The country, however, remains desperately poor. Per capita income is estimated at $1,500, lower than even in North Korea. As long as Pakistan remains a poor country, its democracy will be at risk, and its nuclear weapons arsenal will pose a global risk. The Obama administration recognized this and reversed decades of American policy that provided support for Pakistan’s national security but not for its development. Instead, his administration widened its support to include support for education, health care and other vital inputs for national development. President Donald Trump might contemplate returning to that policy. Perhaps in a limited-overs cricket format?

Rafiq Dossani is director of the RAND Center for Asia Pacific Policy, a senior economist at the nonprofit, nonpartisan RAND Corporation, and a professor at the Pardee RAND Graduate School.

Jalal Awan is an assistant policy researcher at RAND and a Ph.D. student at the Pardee RAND Graduate School.