The New U.S. Commander in Afghanistan Brings Along the Same Stale Ideas 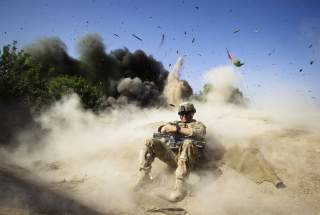 As the anniversary of the September 11 attacks draws near, the Afghanistan War—the nearly seventeen-year-old conflict those terrible events spawned—is seeing a change in leadership. Army Lt. Gen. Austin Scott Miller, America’s ninth commander, is preparing to take charge of the effort but has already admitted to his lack of innovative thinking. At his confirmation hearing in June, he told the Senate that he couldn’t guarantee a timeline for bringing U.S. troops home. This is unfortunate—and expected. Despite the change of command, Miller represents the same stale thinking that has permeated U.S. foreign policy for the last two decades.

Last Wednesday, outgoing Afghanistan commander Gen. John Nicholson, held his final press conference, where he repeated the same talking points on making progress with nothing to show for it. This comes on the heels of a very violent past few weeks in Afghanistan featuring multiple suicide bomb attacks that killed dozens. If there were true progress, America would be creating an exit plan instead of supporting indefinite sustained commitment.

But the Pentagon continues to argue that the Afghanistan mission is about protecting the homeland, asserting that Al Qaeda’s unmolested presence there in the 1990s allowed them to carry out the attacks on 9/11. In reality, those terrible attacks were coordinated from multiple points across the globe—including inside the United States. Moreover, the intelligence community missed almost two dozen opportunities to stop them. Additionally, there are now multiple Al Qaeda-inspired groups across the Middle East, Africa, and South Asia.

But the deadliest threat to America since 9/11 comes from domestic terrorists. In the grand scheme of things, terrorism is a small threat, and American military presence in Afghanistan is not necessary to mitigate it.

U.S. policy in Afghanistan is to build and train a competent Afghan security force that can stand on its own two feet. Seventeen years of investment has not produced that. Fed by corruption and bureaucratic incompetence that results in poor support for troops, desertion rates were 30 percent annually until 2016, when those figures became classified. Another sign of the Afghan army’s failure is the amount of territory contested or controlled by the Taliban, which has consistently risen since the Special Inspector General for Afghanistan Reconstruction (SIGAR) began tracking it.

Yet open-ended American involvement is still defended. For instance, Max Boot, a columnist for the Washington Post and proponent of the American presence in Afghanistan, doesn’t even bother with the idea of training Afghan fighters. Instead, he argues that the United States should keep 14,000 troops in Afghanistan indefinitely, calling it “the least bad option.” As his guide, Boot uses the British, who competed with Russia for control of Central Asia in the nineteenth century. But his own source says the British were unable and unwilling to hold Afghanistan because it was too big a burden. Therefore, the “least bad option” is to leave Afghanistan’s security problems to the Afghan people, especially considering America’s involvement is making a long-term solution less likely.

In spite of best intentions, a permanent U.S. presence would not only exacerbate conflict— but it would also further traumatize the Afghan people. The Afghan people have endured immense trauma over four decades of unbroken war, with U.S. involvement in nearly the entirety of the last two. Afghans, who are often tormented by mental health issues stemming from conflict, need counselors, not troops—who suffer from PTSD, too.

Despite all the evidence that this war is a waste and harmful to those America is trying to help, the Pentagon and the foreign policy establishment consistently stress that things are actually looking up. Frankly, there is no incentive to admit that things may be going poorly. Unless the president is willing to bear the political costs of failure––and thus far Trump has proven he is not––the answer will always be that more time, troops, and funding is necessary.

The United States can't build a self-sustaining Afghanistan. America can't wait for a goldilocks scenario in order to leave, because no such thing exists. Afghanistan serves no strategic purpose, and the U.S. military can defend the American homeland without continued intervention. As Gen. Miller assumes the helm of U.S. forces, he should do something genuinely game-changing and recommend bringing them home.

Sophia Larson is a freelance writer and Young Voices contributor. You can find her on Twitter @sophia_larson33.

Jerrod A. Laber is a DC-based writer and journalist, and a contributor for Young Voices. Follow him on Twitter @JerrodALaber.