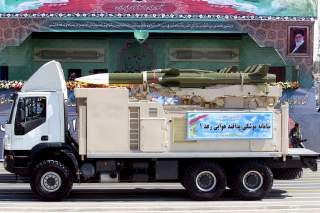 Iran’s ballistic missile attack on two U.S. military bases in Iraq was a double-edged sword. The strike was both provocative and calculated—provocative because the missile barrage was a direct strike on American facilities launched from Iranian territory but calculated because the attack appeared to have purposely avoided buildings where U.S. troops operate. Reports that Iranian officials warned the Iraqi government of the impending attack before it occurred, knowing full well that Baghdad would pass the message along to U.S. forces, is the best evidence we have that Tehran wanted to limit the damage.

We dodged a bullet last night. When the initial reports of the missile attack broke last evening, I was on a busy subway platform in New York City waiting for the N Train to arrive. My head was spinning with worst-case scenarios, like a mass-casualty event where dozens of U.S. troops on station were killed or injured. In such an eventuality, President Trump would have had a very real itch to respond militarily—and that response would likely have included a series of airstrikes on Iranian command-and-control centers, missile silos, coastal defense installations, and perhaps Iranian leadership targets. Fortunately, none of this came to pass. By the time nightfall hit the East Coast, Pentagon officials confirmed no American injuries or fatalities. It looks like the Iraqi military escaped unharmed as well.

The Iranians have signaled their intent to deescalate the situation. Hours after the missiles landed, Foreign Minister Javad Zarif tweeted that “We do not seek escalation or war, but will defend ourselves against any aggression.” President Trump, to his credit, seems to have gotten the hint. At the White House today, the president remarked that “Iran appears to be standing down, which is a very good thing for America and the world.” This, of course, is an understatement; a full-blown conventional conflict between Washington and Tehran would not be limited to Iran, but would spread across multiple countries in the Middle East and throw the entire region into an even hotter hellscape than it’s in today. Such a conflict would also have intense political consequences in an election year, particularly for a president whose whole schtick was to get the U.S. military out of the Middle East.

There is a path available for deescalation. The Iranians have no interest in picking a fight with the U.S., one it would lose.  Like all governments, the top priority for the Iranian leadership is self-preservation.  The U.S., in turn, doesn’t have an interest in getting itself trapped in a third major war in the region—one that would be infinitely more difficult to prosecute than the foolish invasion of Iraq nearly 18 years ago.

But de-escalation only works when both parties concerned are willing and able to leave their delusions at the door, remain tethered to the big picture, and explore a diplomatic way out. Trump wisely decided not to respond militarily to last night’s events, but his short address at the White House this morning also suggests he isn’t willing to move away from the very strategy—maximum pressure—that got us to this dangerous point in the first place. If there are any plans within the administration for diplomatic outreach, the president left it out of his public remarks in order to reconfirm Washington’s sanctions addiction.  “As we continue to evaluate options in response to Iranian aggression,” Trump said, “the United States will immediately impose additional punishing economic sanctions on the Iranian regime.”

Those sanctions will remain intact “Until Iran changes its behavior.”  If this is indeed the course of action the administration has settled on, it will be waiting for a long time indeed.

The all-stick, no-carrot approach remains entrenched U.S. strategy. Last night should have served as a wake-up call that bankrupting the Iranian economy, moving thousands of additional troops into the Persian Gulf, and settling on a list of absurd demands is a loser. When will the White House see the obvious? Will it ever?