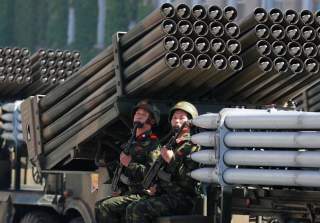 President Donald Trump and North Korean leader Kim Jong-un may or may not be meeting again early next year for their second blockbuster summit. But just because preparations are in the works doesn’t mean Pyongyang is going to stop the nuclear locomotive from barreling full steam ahead.

According to a new report from the Middlebury Institute Jeffrey Lewis and David Schmerler, the North Koreans are expanding a missile base near Yeongjeo-dong close to the Chinese border. And that’s not all; nearby, a second facility was discovered, one that was not previously shielded from the public domain. All of these new disclosures come weeks after researchers at the Center for Strategic and International Studies identified a network of 13 undeclared North Korean missile bases across the country, some of which are no doubt capable of storing intercontinental ballistic missiles.

What is going on here? Is this another grand “deception” by Kim Jong-un, as the New York Times described? Or could something else be going on that goes against the grain of the popular narrative?

The overriding, bipartisan interpretation of North Korea inside Washington is that the country cannot be trusted to make an agreement and carry it out in an honest and verifiable manner. The Clinton administration’s experience with the North Koreans still sticks in Washington’s craw two decades later; the discovery of a clandestine North Korean uranium enrichment program not less than eight years after the Agreed Framework was signed was confirmation in the minds of many U.S. policy advocates and commentators that negotiating with Pyongyang is not only a waste of time but a dangerous capitulation to the world’s most oppressive regime.

Reports of ongoing missile work at the same time Kim is purportedly expressing an interest in denuclearizing will add even more doubt in the Washington policy community about the dictator’s true intentions. The possibility of Kim pulling a hard-and-fast one on the United States, talking a good game while accelerating his nuclear development in secret, is never far from anyone’s mind.

2. Kim: the reliable dictator true to his word

At first, construction of the North’s missile facilities and continued production of bomb fuel would suggest that Pyongyang was never interested in compromising its program to begin with. Dig deeper, however, and Kim’s actions are less mystifying than meets the eye.

During his New Years Day address, Kim talked about a new national strategy. The North, Kim said, would no longer be pursuing the byungjin policy of simultaneous nuclear and economic development. With its nuclear and missile work complete, Pyongyang would now concentrate resources on improving the national economy while mass-producing the nuclear weapons and missiles it already developed. News of further missile production, therefore, is not only unsurprisingly, but expected. Kim is simply doing what he said he was going to do earlier in the year.

While North Korea hawks in Washington will be quick to use the latest reports as evidence of Pyongyang’s insincere intentions, the reality is much less black-and-white. While one could reasonably call ongoing missile development a violation of the June 12 Singapore statement, the fact is that Kim hasn’t agreed to do anything other than “work toward the complete denuclearization of the Korean Peninsula”—phrasing so vague that it could be interpreted in a number of different ways. Additional studies and satellite images from various U.S. institutions of construction equipment moving in and out of the North’s various missile facilities should be expected; in fact, it would be far more shocking if the North Koreans chose not to improve and build upon their missile capability.

In an odd way, continued missile work could actually compliment rather than take away from the months-old nuclear talks between Washington and Pyongyang.

As any diplomat or business titan will tell you, leverage is absolutely key in a negotiation. The more chips you have in your pot, the more you are able to trade and thus the more you are likely to get from the other side in the form of concessions. In other words, Kim Jong-un’s expansion of missile facilities may be less about being sinister and more about increasing his ammunition before engaging in a process of bargaining with the United States. In Pyongyang’s perspective, sixty nukes are a whole lot better than thirty. In a similar vein, twenty missile bases will get you many more concessions from the opposing side than a handful.

Granted, this is a generous reading of Kim Jong-un’s intentions—one that could quickly be disproven as the U.S.-North Korea negotiations progress. But it’s not an altogether illogical possibility, particularly for a country like North Korea that has very little else to offer.

Reports of North Korean missile upgrades are indeed concerning, especially given the relatively lackluster and tenuous state of U.S.-North Korea nuclear diplomacy. But it’s not at all out of the ordinary. This is exactly what the Trump administration should be anticipating from Kim Jong-un, a man who has yet to put his signature on any agreement and who enters nuclear discussions with a far more powerful adversary.