On North Korea, Don't Let the Perfect Be the Enemy of the Good 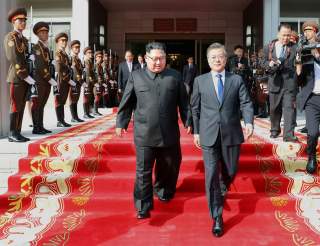 South Koreans who recently met with North Korea’s Supreme Leader Kim Jong-un report that he is determined to achieve denuclearization by 2021, the end of President Donald Trump’s first term. Kim also penned a letter to President Trump, which was delivered to Secretary of State Mike Pompeo. Presumably, it reaffirms Kim’s commitment to bilateral talks over denuclearization, which appear stalled.

No doubt, the Supreme Leader can't wait to abandon weapons developed at such high cost under all three ruling Kims. Now basking in President Trump's aura, Kim presumably desires to disarm for nothing in return, other than Washington's good wishes. He probably has picked a spot on his mantle for his Nobel Peace Prize, an award he hopes to share with his American counterpart.

Despite the uncertainty surrounding prospects for improved U.S.-North Korean ties, Kim appears to be playing the continuing Great Game with extraordinary shrewdness. If meaningful progress toward denuclearization is possible—and Korea “bears” vastly outnumber “bulls”—the Trump administration will have to better assess the North’s objectives and strategy.

What does Pyongyang want? The Democratic People’s Republic of Korea is a monarchy based on a secular version of the divine right of kings. In visiting the DPRK one immediately notices the complete absence of any communist imagery. No pictures of Marx or Lenin. No references to any famous revolutionary sites in China or Russia. Instead, the North Koreans add an artist’s brush to symbolize the role of intellectuals, along with the workers. The only pictures and paintings are ubiquitous renderings of Kim’s father and grandfather, the Dear Leader and Great Leader, respectively.

Kim’s highest objective, one can reasonably surmise, is regime survival. And he has proved to be surprisingly adept at the power game. He took over from his father at age 27, surrounded by apparatchiks who had been waiting for their turn for years, even decades. He speedily removed his supposed “mentors” and executed those he perceived to be threats, including his uncle. No doubt he is equally attuned to foreign dangers, likely from China as well as America. But Washington, with a history of coercive regime change, ranks highest as an enemy.

Is he determined to conquer the Republic of Korea, as some claim? It's impossible to know, but what his grandfather attempted doesn't seem very relevant today, since it was an opportunistic territorial grab in a unique set of geopolitical circumstances. Aggression twice removed sixty-eight years ago doesn't tell us much about Kim Jong-un. Like his grandfather and father, he is ruthless and brutal, but his behavior and policies, including a greater emphasis on economics and enhanced diplomatic outreach, look more pragmatic. He appears to be determined to do better with what he has, rather than wait around hoping for a miracle to deliver the ROK into his hands. Moreover, Seoul is unlikely to surrender, and almost any war would devastate both nations, hardly to Kim's advantage.

Thus, nuclear weapons, along with the ability to deliver them, look to be mostly a tool of regime assurance. Through the bomb, the Kim dynasty gains prestige, and a means to assert its interests. The nuclear program also rewards loyalty by the military, which poses a persistent danger to the ruling family. Perhaps of greatest consequence, a deliverable nuclear warhead makes any attempt at military coercion by the United States unlikely. That is why developing intercontinental missiles is an essential objective for the North—a potential nuclear strike on America's homeland would transform the calculus surrounding any U.S. involvement in any Korean conflict.

Thus, denuclearization most likely requires convincing Kim that he is in greater danger developing his arsenal or that he will gain greater benefits from yielding it. Last year the president attempted the first when he threatened the North with “fire and fury.” Senator Lindsey Graham even suggested that the Second Korean War would be fine with the president since it would be “over there,” rather than “over here.”

The North Koreans do not likely believe such stupidity since any conflict would consume plenty of American lives, civilians and military alike, as well as devastate an ally Washington has defended for nearly seven decades. Moreover, the DPRK has been building nukes to forestall just this kind of coercion. Yielding to Washington would leave the Kim regime vulnerable just like Serbia, Iraq, Afghanistan, Libya, and many other states America has used force on. Officials in Pyongyang, like in Washington, are uncertain about President Trump’s intentions—when I visited last year I was questioned closely about his attitudes and policies. However, the North appears to compare a low likelihood of preventative war to a much higher possibility of regime change without nuclear deterrence.

If Pyongyang cannot be threatened into submission, then it must be convinced that abandoning its nuclear program will yield substantial benefits. That requires addressing the North’s security concerns. Kim’s byungjin policy of parallel development—nukes and economics—treated the two issues as complements. An American promise to lift sanctions only addresses development. Something more is necessary to ensure North Korea’s security.

In his New Year's Day address this year, Kim declared that the nuclear programs had been completed, so the government's focus now was on economics. He did not suggest that he had finished nuclear weapons development in order to give them away to his country's enemy. Instead, he suggested that making his nation secure would allow it to focus on economic growth.

His conduct since then is consistent with both undermining U.S. threats of war and ensuring that denuclearization would yield significant benefits. Kim has improved relations with the ROK’s left-leaning president, won Chinese backing by playing on Beijing’s fears of being left out, gained summit invitations from Moscow (and possibly from Tokyo), exploited an opening with America’s unconventional president, and pledged denuclearization, all on North Korea’s terms.

This approach has made it much harder for Washington to pivot back to “maximum pressure” and especially to threaten to turn Korea into a land of fire. The North ended its ceaseless rhetorical provocations and no longer sounds or looks dangerous. South Koreans see a peaceful future and are not inclined to let an irresponsible U.S. president start a war on their territory. No forbearance would be forthcoming from China or Russia to American military strikes. Nor could the president easily sell war to Americans he recently told that the North no longer was a threat.

Moreover, Kim created a complex process that could lead to denuclearization. Even before the summit, South Korea officials quoted him as saying “If we meet often and build trust with the United States, and if an end to the war and nonaggression are promised, why would we live in difficulty with nuclear weapons?” The (admittedly thin) summit agreement pledged creation of “new” relations and a “peace regime,” which were listed before denuclearization. If Kim is prepared to abandon his nukes (a huge, and in my view dubious, assumption), this order makes sense. He doesn’t want to end up like Muammar Gaddafi, ousted the moment Washington saw its opportunity.

The North's latest actions remain consistent with these objectives. President Trump is frustrated at the lack of speedy progress which he should never have expected. So he canceled a Pompeo trip to Pyongyang. Kim responded by assuring South Korean President Moon Jae-in, with whom a summit is imminent, that he remains committed to denuclearization. (South Korea's national security adviser quoted Kim as being "unequivocally committed to denuclearization.") The Supreme Leader mused about completing the process before the end of President Trump's first term, expressed his "unwavering trust" in the president, and sent a letter, presumably incorporating similar sentiments.

No cynical Korea hand would want to bet that the chairman, as the president calls his counterpart, really shares such sentiments (I mean, what American has “unwavering trust” in the president?). Indeed, Kim’s comments typically are filtered through South Koreans who desperately want to believe them. Nevertheless, Kim may have genuine cause for complaint. Vox’s Alex Ward reported that the president promised to sign an agreement formally ending the Korean War, which would undermine support for future unprovoked U.S. military action. But the administration has not followed through, which the North complained about in the lead-up to the cancellation of Pompeo’s trip. Furthermore, Pyongyang’s concerns could only be heightened by Bob Woodward’s report that after taking office the president requested a Pentagon plan for a preventive war against the DPRK.

Nevertheless, Kim’s continuing commitment to the diplomatic process ensures that any break will come from America, discouraging military action. Kim’s slow-motion strategy also pushes America to deepen the relationship, offering at least one sign that Washington might really have abandoned thoughts of regime change. Indeed, in response to Kim’s reported comments, the president tweeted: “Thank you to Chairman Kim. We will get it done together!”

Complete, verifiable, and irreversible denuclearization (CVID), as Washington defines its objective, remains unlikely. It just is not in the interest of North Korea's present leadership. However, the administration should attempt to convince the Kim regime otherwise. Although doing so requires making concessions and following through on commitments. In any case, even the fruitless pursuit of CVID could lead to other benefits—limits on the DPRK threat as well as improvements in the security environment that make the use of force by any party far less likely.