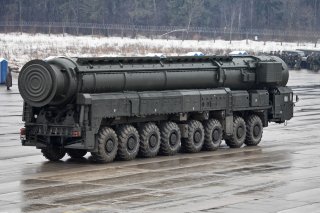 In the coronavirus era it can be challenging to remember what happened just ten days ago, let alone a decade ago. But, ten years ago, April 8, 2010, was a pivotal moment in U.S.-Russia relations that is well worth recollecting. That was the day the United States and Russia signed the historic New Strategic Arms Reduction Treaty (New START), an agreement to reduce U.S. and Russian nuclear weapons. An agreement that is now, thanks to growing strains in the relationship, in danger of unravelling.

A major part of the problem is that since the 2016 elections, America has been hyper focused on foreign interference in U.S. elections, and no foreign power is more synonymous with election interference than Russia. After the intelligence community’s assessment that Russian President Vladimir Putin ordered an influence campaign designed to hurt Hillary Clinton and help Donald Trump, many Americans have become distrustful of Russia. Democrats’ loathing of Russia soared, not surprisingly. Republicans, while not sharing the full extent of Democrats’ disdain, have a highly unfavorable opinion of Putin. In fact, Russia is seen less favorably by all Americans now than at any time since the end of the Cold War.

This public distrust of Putin’s Russia has contributed to the extraordinarily strained state of the current U.S.-Russia relationship. While the public and policymakers have, rightfully, focused on Russian election interference, our Russophobia has stalled progress in a number of areas where the United States and Russia must cooperate. Most notably, little progress has been made recently in pursuing reductions in both countries’ nuclear weapons stockpiles by extending New START, which expires in less than a year from now. Extending this pivotal treaty via a simple executive agreement signed by the U.S. and Russian presidents would preserve restraints on both countries’ nuclear arsenals as well as important transparency and verification measures.

The U.S. Congress, despite any apprehension its Members might have about Russia, has a duty to urge the Trump administration to take action here and correct past nuclear policy missteps. Last August, the Trump administration withdrew from the Intermediate-Range Nuclear Forces (INF) Treaty. Without the INF Treaty, New START is the only remaining treaty limiting U.S. and Russian nuclear arsenals. New START represents years of bilateral cooperation between the world’s two largest nuclear arsenals and caps both countries’ strategically deployed weapons as well as provides for inspections and data sharing on each other’s nuclear arsenals. Without the INF Treaty and New START, there would be no binding, verifiable limits on U.S. or Russian nuclear arsenals for the first time since 1972.

History has proven that negotiating on arms control does work: agreements like the INF Treaty and New START have led to the reduction of nuclear weapons globally, from 70,300 in the 1980s to nearly 14,000 in 2020. Extending New START would continue the legacy of Washington and Moscow cooperating on nuclear arms reduction even when political relations are hostile.

It’s a life-or-death matter and Congress can play a pivotal role in urging the Trump administration to extend New START.

Congress should follow the lead of Rep. Eliot Engel (D-NY-16) and Sen. Chris Van Hollen (D-MD), who introduced H.R.2529 and S.2394, respectively, known as the Richard G. Lugar and Ellen O. Tauscher Act to Maintain Limits on Russian Nuclear Forces. This legislation requires the Office of the Director of National Intelligence and the Department of State to report to Congress on the intelligence implications of the treaty’s expiration and the possible reactions of U.S. allies to the expiration of the treaty. Furthermore, if the treaty expires without a replacement, the President is required to provide Congress a justification for the expiration and “certify that extending the treaty was not in U.S. national security interests.”

If New START expires, or either party withdraws without a replacement treaty, America and Russia would be free to build up their nuclear arsenals. There would be nothing left to restrain the new nuclear arms race, and both countries would lose insight into the other’s nuclear arsenals. This move would reverse decades of bipartisan and international cooperation to reduce the threat of nuclear weapons.

Moreover, the American public is strongly in favor of nuclear arms control, as evidenced by a study from the Nuclear Threat Initiative, which found that 80 percent of engaged voters in the U.S. support extending New START in order to address the threat of nuclear weapons. Congress has a duty to listen to the American people and not allow other issues to distract from urging President Trump to extend New START and further discuss disarmament efforts.

Ten years ago, former U.S. President Obama and Russian President Medvedev signed New START. Now, the United States and Russia have less than one year before New START expires. The clock is ticking.

Colleen Moore is the Digital Engagement Manager at Beyond the Bomb and Global Zero.

Ben Freeman is the Director of the Foreign Influence Transparency Initiative at the Center for International Policy.