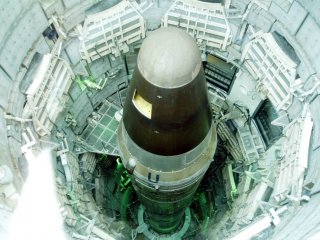 China has become more assertive in the expansion and modernization of its nuclear forces. On June 30, Dr. Jeffrey Lewis and Decker Eveleth revealed in the Washington Post the discovery of satellite images that showed 120 Chinese intercontinental ballistic missile (ICBM) silos under construction – an increase of 87 percent from the previously 16 known silos for latest-generation ICBMs. Both joined Ploughshares Fund’s Press the Button podcast to discuss what this means for Chinese nuclear forces and U.S. foreign policy.

Eveleth, an undergraduate student at Reed College, discovered the silos in Yumen in the western desert using commercial satellite images from Planet Labs, a private Earth-imaging company that provides open data access. “[China has] all of these big inflatable domes that are spaced perfectly from three kilometers apart,” Eveleth explained, “there’s not really any other civilian projects that would require this amount of infrastructure in this space.”

The discovery has come as a surprise since China had previously invested in missiles that can be put on vehicles and moved around. Lewis, the director of the East Asia Nonproliferation Program for the James Martin Center for Nonproliferation Studies, adds that this emphasizes a rapid change in pattern which requires attention from the national security community.

Lewis is worried about this shift from a “post-Cold War period where numbers were going down and things were relaxed to what I would characterize as the beginning of an arms race.” Referring to the United States and China, he explains that “our deployments are predicated on theirs, and vice versa. They're worried about survivability.” After all, the United States has a larger nuclear force.

Eveleth notes that the new silos, dubbed “Xi’s shells” in an article in The Economist, are likely a response to the large U.S. ICBM force: “Building a set of 120 silos means that the United States [would] dedicate (…) a large portion of their available resources, destroying a fixed target,” while taking pressure off of Chinese mobile forces.

The major question is whether all of the silos will contain missiles – Lewis and Eveleth say there is a reasonable chance they will not, but the United States will not know that for sure. Lewis and Eveleth agree that it is very difficult for imagery analysts to tell which missile canisters are filled. Lewis added that all this reminded him of a US strategy in the 1980s: “Like everything in America we were going to do it big so that [the United States] called this the Shell Game. We were going (…) to hide [200 missiles] among 4,600 shelters.” Responding to China with a new Shell Game is not the answer, Lewis explains.

How should the United States address Chinese nuclear modernization? The discovery caused polarizing responses ranging from, “I refuse to believe it because I don't like it [to] it's 100 percent true because I don't trust those Chinese,” according to Lewis. A heated debate is underway among foreign policy experts on what the right U.S. foreign policy might be.

According to Lewis, alarmists argued in response to the discovery that an arms control deal with China is the wrong solution since it has underperformed in the past. Rather, the United States should respond by updating its nuclear arsenal. However, as Lewis points out, the United States already possesses (quadruple) numerical superiority and is already modernizing its force. Lewis suggests that the United States will have to engage in a dialogue with China (and a modernizing Russia): “I think we are in a situation where both Russia and China are changing their forces and if we don't like what they're doing – whether that's Russia with this bizarre science fiction weapons or trying to dig in 120 silos – we're going to have to talk to them.”

However, Eveleth says, it is a difficult task to bring China to the nuclear negotiating table when there is such disparity in nuclear forces and when the United States refuses to discuss missile defenses. Nevertheless, Lewis sees space for negotiations and says there is “a cadre of really smart, experienced people [in the Biden administration] who get the nuclear threat.”

Despite recent challenges driven by nuclear modernization, there is hope and perhaps even an opportunity for nuclear arms control. A renewed awareness and risk of a second nuclear arms race is creating a larger public debate. That provides an opportunity for the arms control and disarmament community to address these issues and advocate for more diplomatic approaches.

The entire interview with Dr. Jeffrey Lewis and Decker Eveleth is available here on Press the Button.

Doreen Horschig is the current Roger L. Hale Fellow at the Ploughshares Fund, a global security foundation. She received her PhD in security studies from the University of Central Florida and studies nuclear policy, specifically norms, public opinion, and counter-proliferation of nuclear weapons. You can follow her on Twitter @doreen__h.