The One Reason America Can't Police the World Anymore: Washington Is Broke 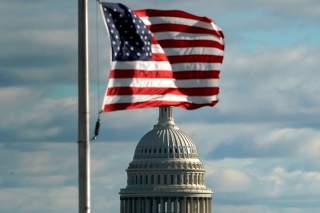 Cuts are inevitable. The obvious place to start is overseas contingency operations, funded by supplementals to the base-budget appropriations. OCO monies peaked in 2007 and 2008 at 28 percent of Pentagon outlays. From 2001 to 2018 they averaged about a fifth. These funds mostly go for wars of choice, social engineering, and other dubious ventures without much to do with America’s “common defense.” (This practice creates another problem, obscuring military spending and its purpose. As CBO, explained, use of OCO “creates an inaccurate picture of what future defense spending might be in the absence of military conflicts.”)

However, far more serious reductions are required. The base-budget underwrites a system of guarantees, alliances, and deployments which are not sustainable—and wouldn’t be in America’s interest even if they were. The starting point, though, is to revise foreign policy. That is, cutting expenditures without trimming tasks risks creating a dangerous mismatch, forcing Washington to either abandon commitments made or uphold them without the necessary force. Instead, the administration should drop obsolete alliances, adjusting its force structure accordingly. That requires a serious debate over America’s role in the world and the inevitable trade-off between military adventurism, domestic social programs, and private incomes.

Uncle Sam is like the congenital wastrel who keeps buying rounds at the neighborhood bar. As long he can run a tab—or his credit card charge goes through—he keeps going, heading toward inevitable disaster. The longer Washington waits to reform its ways, the bigger and more disruptive changes ultimately will have to be. Approving future cuts now, even with the effects delayed, would provide greater certainty and lower long-term interest rates. Moreover, people could begin to adapt—at home to income cuts, abroad to burden-shifting.

To stabilize Washington’s finances, all programs need to be addressed. However, military outlays deserve an especially thorough review. America First, as the president proclaims, should not mean ignoring the needs and rights of others. But it should recognize that the U.S. government’s highest duty is to its own people. America First also means that war, given the unique costs—lives lost, risks taken, money wasted—is a last resort undertaken only for the most serious, even vital purposes.