The Philippines Wants U.S. Military Forces Gone? Donald Trump Should Do It. 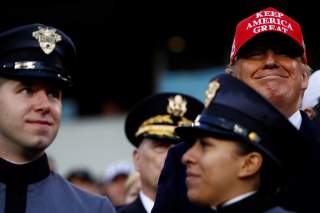 Philippines’ President Rodrigo Duterte threatened in January to end his country’s Visiting Forces Agreement with the United States if Washington would not reinstate the visa of his former drug war chief. Last Tuesday, Duterte’s government announced the agreement permitting U.S. troops to train in the Philippines is done. “It’s about time we rely on ourselves. We will strengthen our own defenses and not rely on any other country,” Duterte’s representative quoted him saying.

Well, maybe or maybe not—Philippine Foreign Secretary Teddy Locsin Jr., who tweeted the initial announcement, also indicated on Twitter that Manila’s endgame is forcing Washington to negotiate on trade and security issues, not actually ousting U.S. troops. And it seems likely the visa revocation is merely a convenient excuse for a move Duterte wanted to make regardless.

But whatever Duterte’s intent, the Trump administration should take his announcement seriously and bring our troops home. And he might be taking it seriously—Reuters reports that Trump said he wouldn't mind if the agreement was terminated, making the point that, "it will save a lot of money." However, putting aside financial concerns, there's good reason to end the U.S. military presence in the Philippines—and beyond.

The United States maintains about 800 overseas military bases in 70 nations and territories around the world. Some house only a few dozen American troops, but at many, U.S. forces number in the tens of thousands. No other country has anything like this global military presence: The U.K., France, and Russia together have a mere 30 or so foreign bases, and two of them are close U.S. allies.

This worldwide sprawl of American military might is expensive, risky, and counterproductive to U.S. security. It costs taxpayers hundreds of billions of dollars every year—money which functionally subsidizes the host nations’ governments, which too often respond to our military presence by avoiding responsibility for their own defense. That’s bad enough in Europe, where wealthy NATO allies perfectly capable of defending themselves are freed up to spend more on their domestic welfare states instead. It’s worse in countries like the Philippines, where Duterte’s brutal regime can claim the credibility of alliance with the United States while oppressing its own people. In war zones like Iraq—another nation, incidentally, which has asked U.S. troops to leave—prolonging U.S. presence there puts Americans in harm’s way on behalf of a country that does not want them there.

Battlefield risk is not the only danger these foreign bases occasion. In ocean trade lanes near the Philippines, for example, the U.S. conducts Freedom of Navigation Operations to push back on Chinese regional dominance. But as China’s power grows in its near abroad, such operations increasingly chance unwanted encounters between U.S. and Chinese forces, like the late 2018 near-collision between warships. The risk of stumbling into a shooting war is real. Open war between the U.S. and China would be catastrophic even if it never turned nuclear; maintaining an inherently antagonistic presence in the Philippines is short-sighted and reckless.

Fortunately, this network of foreign military bases in the Philippines and elsewhere are not necessary to secure vital U.S. interests. The U.S. military is far and away the most powerful on the planet. Our country enjoys friendly neighbors, considerable geographic advantages, and no peer rivals militarily. Spreading our forces thin to defend and meddle in foreign countries is at best a distraction from core defense priorities and more typically a wasteful, counterproductive use of limited defense resources.

“We more and more are not wanting to be the policemen of the world,” President Trump has said of U.S. foreign policy. “We’re spending tremendous amounts of money for decades policing the world, and that shouldn’t be the priority.” His impulse here is correct, but it is difficult to stop policing the world when you have 800 police stations. Shutting down these bases is necessary if we are ever to move toward what Trump claims he wants: a prudent, realist foreign policy that prioritizes diplomacy in pursuit of peace. Taking the Philippines’ Duterte at his word here would be a good place to start.