A Plea: Can We Stop Labeling People as 'Isolationists'? 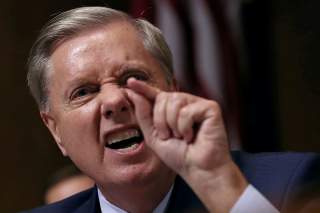 Washington, D.C. loves a label. You’re either a hawk or a dove, a liberal internationalist or a cold-blooded realist. Some are America First nationalists (a relatively new collective of people synonymous with the political rise of Donald Trump) while others are traditional peace-through-strength Ronald Reagan conservatives. And if you can’t find a home, you can always freelance as a moderate pragmatist, dipping your toe into multiple pools depending on which issue makes the top of the news cycle.

Unfortunately, the big problem with labels is that they can also be used in a less-than-genuine and indeed malicious fashion against opponents who hold views other than your own. Nowhere is this more the case than when analysts, commentators, and even well-credentialed journalists toss around the world “isolationist,” or “isolationism,” two terms that embody a gross simplicity and are designed to dumb down conversations otherwise filled with nuisance, complexity, and no clear explanations.

Americans have heard the “I word” consistently during the era of Donald Trump. Indeed, they’ve seen it splashed across the editorial pages of multiple newspapers during the Barack Obama presidency as well.  The pattern usually consists of the following: the president (it can be either a Republican or a Democrat) refuses to authorize a military operation against another government for any number of reasons, but within hours gets pilloried or lectured from an arm-chair general in a television studio about America’s “feckless,” “weak,” or “irresolute” response. The president, of course, could have a perfectly legitimate justification for not ordering the launch of a few dozen air or sea-based cruise missiles towards a target hundreds of miles away. Perhaps the use of military force would make an already hairy situation worse or throw the United States into a conflict that it has neither the resources, will, patience, or interest to fight. But for most who use the "I-word" with hardly a flinch, the specifics and context are far less important than the end result of the world’s only remaining superpower neglecting to engage militarily.

Ever since President Trump’s decision over a week ago to pull 1,000 U.S. troops from northeastern Syria, critics of the move have used the isolationist pejorative as their first line of defense. Rep. Dan Crenshaw of Texas used “isolationist” twice in an October 13 tweet denouncing the U.S. departure, writing that "Isolationists argue “it’s not our war!” while conveniently forgetting world history.” Meghan McCain, the daughter of the late Sen. John McCain, slammed Sen. Rand Paul for what she described as his isolationist views aiding and abetting a Turkish massacre of Kurdish populations in Syria. Bill Kristol, the former editor of the now deceased Weekly Standard who has never seen a war he didn’t want the United States to fight, has been a consistent promotor of the theme for years. The Wall Street Journal editorial board, channeling its inner John Bolton, is never shy in firing this loaded word from its rhetorical fuselage; in an October 14 editorial, the paper likened Trump’s Syria redeployment as “simple-minded isolationism” and a complete repudiation of American global leadership. To all the above, every public official who supports Trump’s decision is the 21st iteration of Neville Chamberlain in Munich, circa 1938.  Any U.S. withdrawal, anywhere, is watered down as weak-kneed wobbly behavior from a superpower that has immense responsibilities.

Of course, the fact that there are no actual isolationists in Washington today completely bankrupts the arguments of a Liz Cheney, Tom Cotton, or Lindsey Graham (this, of course, doesn’t do anything to stop any of them from following the same playbook). Look up “isolationist” in the dictionary and it becomes abundantly clear almost immediately that nobody on Capitol Hill or in the White House—not Rand Paul, Justin Amash, Mike Lee, Bernie Sanders, or Donald Trump—promotes policies that would close the United States off from the world; sever all alliances regardless of their utility; cease all commercial relations with other countries; dismantle every single overseas U.S. military base (there are reportedly nearly 800 of them spread out across 70 countries); and prevent all immigration into the country full stop, without exceptions.

But for this loud and boisterous crowd, reality simply gets in the way. The “I word” is not so much deployed to reflect accuracy and truth in today’s foreign policy discourse as it is to tar-and-feather those of us who believe that the United States must free itself from overdue, expensive burdens that have little to no geopolitical benefit to the nation and others who plead for U.S. political leaders to think long and hard before plunging into a conflict that could very likely result in the unnecessary loss of American life and the contraction of Washington’s wallet. It’s not a good-faith argument or a contribution to the debate, but a lazy, go-to tactic to smear people who dare to question the wisdom of an interventionist faction that has jealously guarded its power over U.S. foreign policy for the last three decades.

So, a word to the wise the next time you come across the term in the paper or on the television screen: ignore it. In fact, pretend you never saw it. Because there is a good chance that the individual using it is either ill-informed or doesn’t have an argument to start with.