Poll: 33% of Americans Are in Favor of Dropping Nuclear Weapons on North Korea 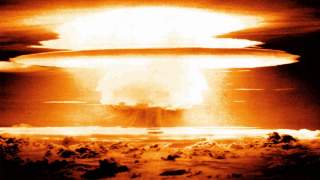 Former Secretary of Defense William Perry knows a thing or two about how North Korea operates. Before being appointed as President Bill Clinton’s special envoy in 1999 for missile talks with the North, he poured over military strike plans against Pyongyang’s nuclear facilities in the White House. The Clinton administration was close to giving the green-light in 1994 when former President Jimmy Carter—then in North Korea meeting with the country’s founder, Kim Il-sung—called the White House in a hurry and asked them not to proceed because an understanding was in the works.

For Perry, the experience was jarring. The former SecDef has used this incident in the two decades since as a way to educate the American people about how important and necessary diplomacy with America’s fiercest adversaries is. It’s far better to resolve an issue through talking than shooting. Twenty-three years later, when another U.S. administration was talking about military options to the North Korea problem, Perry pleaded for calm. “This is not like the Syrian operation where we conducted a strike which we think was relatively cost-free to us militarily,” he told the Los Angeles Times in a 2017 interview. “In the case of North Korea, for whatever benefits we might accrue from the strike, and they might be substantial benefits, there is a very significant downside.”

That downside, of course, could include the following: a Pyongyang bombed back to the Stone Age; a smoldering Seoul; hundreds of thousands of casualties (millions if nuclear weapons are involved); a major breach in the U.S.-South Korea relationship; thousands, if not tens of thousands of American deaths; and a United States standing alone as most of the world looks at the damage in horror.

Apparently, a vocal minority of Americans would still be willing to go through with it. According to a survey of 3,000 Americans published this month in the Bulletin of the Atomic Scientists, over a third polled supported a preventive U.S. military attack against Pyongyang if the North resumed testing long-range, nuclear-capable missiles that could reach the United States. 33 percent of respondents would support a nuclear-first strike on the North regardless of the civilian casualties such an attack would produce. As the study’s authors write, “There is no significant change in the percentage who would prefer or approve of a US nuclear strike when the number of estimated North Korean fatalities increases from 15,000 to 1.1 million, including 1 million civilians.”

The American public also isn’t squeamish to respond to the North militarily in the event of an attack on the United States or its allies. 59 percent of Americans approved of a major conventional attack on North Korea if Pyongyang hypothetically sank a U.S. naval vessel. In such a case, Americans would be clamoring for justified revenge—and the president, whomever that president happens to be, would likely give it to them.

Broadly speaking, however, the American public doesn’t want a war with North Korea. While there is no question the United States would be on the winning side of such a confrontation, a war would be by far the most violent the world has seen since the last Korean War sixty-five years ago—if not more so given the weapons involved. Indeed, notwithstanding the typical media coverage of the Kim regime being staffed and led by a bunch of lunatics, Americans don’t believe the North Koreans are crazy enough to send a nuclear-tipped missile towards American airspace unprovoked. Asked if North Korea “can be deterred from using nuclear weapons against the United States or South Korea by the threat of devastating US retaliation against North Korea,” 63 percent of Americans surveyed said yes. This is an incredibly important finding, for it suggests the public would be implacably opposed to the kind of “bloody nose” military option that former National Security Adviser H.R. McMaster was pursuing during his time in government.

At bottom, the American people are right. Kim Jong-un may be weird, Machiavellian, and a bit narcissistic with delusions of grandeur, but he isn’t a nut courting confrontation with a country like the United States that could destroy his regime in a matter of days. The narcissist in him wants to survive, grow rich, wield unquestioned power, and die in his large bed after living a long and fulsome life. Needless to say, going to war with the United States is a great way of seeing those dreams crushed.

The American people get it. We can live with a nuclear North Korea if we have to. We may not like it, but it can be done. It’s time that clear-headed logic pierced the Washington bubble.