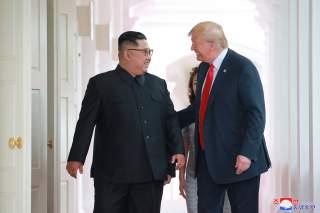 With the second summit between President Donald Trump and North Korean leader Kim Jong-un getting closer with every passing day, the prognosticators get louder and louder. It is safe to assume that, back in Washington, trepidation hovers in the air. Some Korea hands are nervous that Trump will put the U.S. troop presence in South Korea on the table as a bargaining tool, while others are calling the February 27-28 meeting in Hanoi a last chance for the Trump administration to extract bold, substantive nuclear concessions from Pyongyang. The safe bet in town is to wager that Trump will fly back home with little to show for the effort.

Evidently, foreign policy analysts in Washington aren’t the only ones who are skeptical of diplomacy with the North Koreans resulting in the Hermit Kingdom’s denuclearization. This week, the Chicago Council on Global Affairs published its latest survey on American attitudes towards the talks, its opinion of the U.S.-South Korea alliance, and the American people’s aspirations for a nuclear-free world in general.

At the same time President Trump tells reporters in the Oval Office that he is “no rush” to speed the negotiations towards a successful conclusion, Americans continue to take a cold-hearted, realistic view of ongoing U.S.-North Korea diplomacy. They have witnessed North Korea’s antics before and have seen U.S. policy fail time and time again. And it’s reflected in the numbers: according to the poll, 73% of Americans don’t believe North Korea will denuclearize, a figure high enough to suggest that pessimism cuts across political lines. Only 3% are very confident that the North will dismantle its nuclear infrastructure and destroy its nuclear warheads, a number so low that it can be classified as within the poll’s margin of error.

While the survey doesn’t inquire about why Americans are so fatalistic on this question, it can likely be explained. When the average American hears the word “North Korea,” he or she typically imagines a cult-like dictatorship with a massive conventional (although antiquated) army that executes defectors with anti-aircraft guns, tests missiles at a steady clip, and puts tens of thousands of North Koreans into concentration camps. Notwithstanding Kim Jong-un’s coming-out party as a globe-trotting statesman, the Kim regime is still very much seen by the American people as untrustworthy, duplicitous, tricky, and barbaric. They have watched previous American presidents try their hand at negotiating with the North, only to observe those negotiations come to nothing as Pyongyang stalls on verification or is caught spinning centrifuges at an undisclosed facility. Simply put, Americans have viewed North Korea as a mortal enemy for so long that there is very little in the way of trust and positivity.

Americans may doubt denuclearization is achievable for another reason: North Korea is already a nuclear weapons state, which means the Kim regime will need to make the conscience decision to forgo the one asset that has all but eliminated a U.S. military option against him. Kim Jong-un is no dummy: he realizes what can happen to a U.S. adversary if it doesn’t possess a nuclear capability. He could ask Saddam Hussein and Muammar al-Gaddafi about it if it weren’t for the fact that both are dead and buried, courtesy of Uncle Sam.

What about the U.S.-South Korea alliance? Are Americans prepared to reassess the strategic relationship with Seoul if a miracle does in fact occur and Kim Jong-un decides to actually denuclearize?

Apparently not. The Chicago Council poll finds that 51 percent of Americans believe the United States should maintain its alliance with South Korea and keep U.S. troops on South Korean soil even if Pyongyang shuts down its nuclear weapons program. This finding is in keeping with past polling from the Council, including a 2016 survey in which 70 percent of Americans supported U.S. military bases in South Korea over the long-term—including 72 percent of Trump supporters. It’s as if the U.S.-South Korea alliance is ingrained in the American psyche as untouchable, a prime piece of real-estate Washington should hold onto as a strategic hedge to watch over an emergent Chinese superpower.

This survey is not capable of telling us about whether North Korea’s denuclearization is an even realistic prospect. What this latest poll does reveal, however, is that the American people are keeping their expectations for a nuclear breakthrough extremely low. Unless President Trump can prove them otherwise, Americans may very well look at the next summit in Hanoi as a worthless, choreographed exercise.