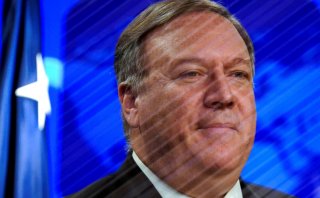 Secretary of State Mike Pompeo accused Sen. Robert Menendez (D-N.J.) of being corrupt while defending his own conduct towards the State Department’s internal watchdog.

Pompeo hit back at a Wednesday morning press conference, denying any knowledge of Linick’s investigations outside of the questions that Linick had asked him.

Pompeo blamed the “leaks” to the press about Linick’s investigation on Menendez, the highest-ranking Democrat on the Senate Foreign Relations Committee, who is closer to Pompeo than many other Democrats on policy matters.

“I don’t get my ethics advice from a man who was criminally prosecuted,” Pompeo said. “A man for whom his Senate colleagues, both parties, basically said he was taking bribes.”

Menendez was indicted for allegedly taking bribes from Florida ophthalmologist Salomon Melgen in 2015, but the criminal case against him was dismissed in 2018. The Senate Select Committee on Ethics found in its own investigation that Menendez had “repeatedly accepted gifts of significant value from Dr. Melgen without obtaining required Committee approval.”

“The facts speak for themselves,” Menendez later said. “Secretary Pompeo now faces an investigation into both this improper firing and into his attempt to cover up his inappropriate and possibly illegal actions. Not surprisingly, he has lashed out at me and others conducting Congressional oversight.”

Pompeo also denied knowing anything about Linick’s investigations when the inspector general was fired.

“I had no sense what investigations were taking place inside the inspector general’s office. I couldn’t possibly have retaliated,” he said. “There was one exception. I was asked a series of questions in writing in respect to a particular investigation. I don’t know the scope of that investigation other than what I have seen from the nature of the questions.”

Pompeo had reportedly answered a series of written questions from the inspector general about the Trump administration’s arms sales to Saudi Arabia, which President Donald Trump had pushed through despite a vote in Congress blocking the deal.

House Foreign Affairs Committee Chairman Elliot Engel (D-N.J.), who had pushed for an investigation into the arms deal, immediately raised alarms about Linick’s firing on Friday.

He called it “the outrageous act of a President trying to protect one of his most loyal supporters, the Secretary of State, from accountability” in a Friday night statement.

Engel and Menendez are now leading a congressional probe into the firing. The Washington Post has also reported that Pompeo was under investigation from using a State Department staffer for housekeeping chores.

Pompeo dismissed the allegations as a conspiracy theory: “Someone was walking my dog in order to sell arms to my dry cleaner.”

But he also refused to provide any explanation for why Linick was fired, claiming that he does not “talk about personnel matters.”

Trump has made it clear that the decision was Pompeo’s alone.

“I don’t know [Linick] at all. I never even heard of him. I was asked to by the State Department, by Mike,” he said at a Tuesday night press conference.

This article has been updated to reflect a subsequent statement by Sen. Menendez.