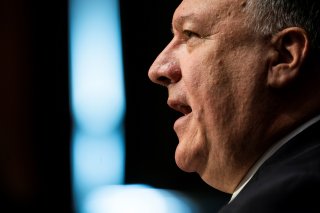 The Trump administration is rolling out a new initiative to create a global Clean Network free of Chinese influence, Secretary of State Mike Pompeo announced on Wednesday.

The United States has accused China of data theft and other malign cyber activities as tensions rise between the two global powers. Pompeo gave a preview of likely U.S. moves to reduce Beijing’s reach into American networks.

“We’re protecting Americans’ most sensitive information, and our businesses’ most valuable intellectual property,” he said. “We call on all freedom-loving nations and companies to join the Clean Network.”

The Secretary of State also offered a $10 million reward for information on foreign-backed hackers or cyber-warfare officers working to undermine U.S. elections under the Rewards for Justice counterterrorism program.

“The State Department's Rewards for Justice program is offering a reward of up to $10 million for information leading to the identification or location of any person, who, acting at the direction or under the control of a foreign government, interferes with U.S. elections by engaging in certain criminal cyber activities,” he said.

The program issued another $15 million bounty in December for Brig. Gen. Abdul Reza Shahla’i, an Iranian military commander accused of attempting to assassinate the Saudi ambassador in Washington. U.S. forces attempted to kill Shahla’i in Yemen the next month.

The State Department expanded this bounty program to include cyber-warfare in April 2020, when it offered up to $5 million for information on North Korean hackers threatening the United States or the international financial system.

Pompeo said that the latest bounty for election interference was one of the ways that the Trump administration “has worked continuously to secure our democracy.”

He accused China of a wide-ranging campaign to undermine democracy both at home and abroad, from cracking down on the Uyghur minority to issuing warrants for U.S.-based activists.

“Freedom-loving nations must come together to confront the [Chinese Communist Party]'s aggressive behavior, and the good news is, the tide is absolutely turning,” he said. “The central idea of distrust and then verify, I think, the world is coming to see, is the right approach.”