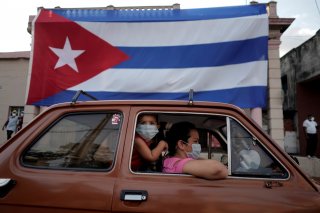 Progressive foreign policy groups are forming a new alliance to push for better relations with Cuba, after an attempt to roll back the Trump administration’s economic sanctions on the island nation failed in the House of Representatives.

The Trump administration has sharply limited the ability of Cuban-Americans to send money to their relatives in Cuba, hoping to stop Americans “from enriching Cuban regime insiders and their families.” Progressives lined up against the new sanctions, arguing that the last thing Cuba needed was an economic meltdown during the coronavirus pandemic.

Rep. Bobby Rush (D–Ill.) had a solution: he filed an amendment to the Treasury’s operating budget that would temporarily prevent them from enforcing the caps.

Rush ran into pushback with colleagues—enough to make him withdraw the amendment on Tuesday. But his proposal galvanized progressives, who are forming a new group to agitate against the sanctions: the Alliance for Cuba Engagement and Respect, or ACERE.

“We feel certain it will bring new energy to change the criminal policy that, during a pandemic, is causing so much needless suffering for the Cuban people,” said Medea Benjamin, codirector of the peace group CODEPINK, a founding member of ACERE.

President Donald Trump rolled back this engagement, reimposing some sanctions and imposing new ones as part of a campaign against Latin America’s “troika of tyranny.” The Trump administration was particularly focused on ending Cuba’s support for Venezuelan ruler Nicolás Maduro, who has clung to power after a disputed election in 2018.

Democrats have been reluctant to push back. The party has historically been wary of anything that could seem soft on Cuba’s communist government, as Cuban-American exiles opposed to that government are a key voting bloc in the swing state of Florida.

“Over the last six decades, hundreds of thousands of Cubans have risked their lives to escape the tyranny of the Castro regime—a reign of fear, paranoia, and oppression that regularly abuses human rights in order to stifle free thought and democracy in Cuba to this very day,” Rep. Donna Shalala (D–Fla.) said in a statement at the time.

But one Trump administration measure may have put Cuba doves on the same side as the Cuban-American community writ large.

The U.S. Treasury announced in September 2019 that Cuban-Americans would only be able to send $1,000 every three months to family members in Cuba, ostensibly to prevent the regime from benefitting.

More than half of the Cuban population inside Cuba receives remittances, adding up to $3.5 billion per year, according to a February 2019 study by the German Institute of Global and Area Studies.

U.S. Treasury officials also banned gifts by U.S. citizens and permanent residents to non-family members in Cuba, although they carved out exceptions for private businesses and pro-democracy organizations.

“In line with the President’s foreign policy on Cuba, these actions are designed to target the Cuban regime while continuing to provide vital relief to the long-suffering people of Cuba,” the Treasury announced in a September 2019 statement.

The Trump administration put additional sanctions on FINCIMEX, the main Cuban financial institution processing remittances, in June 2020. This move threatened remittances altogether, although it appears that remittances could continue to flow, at least for the time being.

The Cuban-American community was alarmed, and several Democratic representatives from Florida spoke out against limits on remittances.

Kathy Castor and Debbie Mucarsel-Powell criticized the $1,000 per month limit when it was rolled out, while Shalala came out forcefully against the decision to sanction FINCIMEX in light of the coronavirus pandemic.

“If Trump effectively cuts off remittances in the middle of a pandemic, it will not only be cruel to the Cubans on the island but their families—many of my constituents—in the” United States, Shalala stated on social media.

And the pandemic and resulting economic crisis has made sanctions a more urgent issue for progressives.

Progressive and some moderate Democrats joined forces in April to call for temporary sanctions relief for Iran and Venezuela in order to aid both countries’ responses to the pandemic.

The Trump administration ultimately rejected these calls, insisting that Iranian and Venezuelan mismanagement are to blame for any health crisis, not U.S. sanctions.

The controversy over sanctions on Iran and Venezuela eventually unleashed a broader debate within the left about the use and misuse of economic sanctions.

Rep. Joaquin Castro (D–Texas) wrote that “the primary victims [of sanctions] abroad are civilians whom we should be seeking to empower, not impoverish” in a July 2020 essay announcing his candidacy for House Foreign Affairs Committee Chair.

And Rep. Tulsi Gabbard (D–Hawaii) successfully passed an amendment to the House version of the military budget requiring the President to report on the humanitarian impacts of U.S. sanctions.

Progressives were galvanized to act on Cuba amidst reports that the Cuban government has begun implementing widespread rationing for the first time since the “special period” of the 1990s.

They saw an opening when Congress was drafting the appropriations bill for the Treasury Department along with several other cabinet departments.

These annual budgets are often an opportunity for pressure groups to pass measures that they would not be able to as standalone laws, since the President cannot veto specific lines from a bill, and because the bill must pass in order to keep vital government agencies running.

Rush proposed an amendment to the Treasury budget that would prevent Treasury officials from enforcing their cap on remittances, essentially rolling back the restriction for one year.

He also proposed a separate amendment to the same budget bill that would prevent the Treasury from blocking food and medicine exports to Cuba.

U.S. economic sanctions technically allow trade in food and medicine, but the U.S. Treasury recently fined a Kansas-based animal feed company for sanctions violations after it sold agricultural products to Cuba without a license.

Over one hundred groups signed onto a letter supporting the Rush amendments. Many of them were smaller, local groups, but some

So did the national Presbyerian Church, the United Methodist Church’s General Board of Church and Society, and the National Council of Churches of Christ.

But the attempt to roll back Cuba sanctions failed soon after it started. Rush withdrew the two amendments under pressure from unnamed members of Congress.

“Normalizing U.S. relations with Cuba has, and will continue to be, a top priority so long as I am a Member of Congress,” he said in a statement provided by his office.

“However, upon further consideration and conversations with my Congressional colleagues, I have determined that these amendments are unlikely to be adopted by the Senate or signed into law by the President,” Rush stated. “I believe it best to withdraw these amendments from consideration at this time as we seek to broaden our coalition of support around this issue.”

ACERE could be just that coalition.

Benjamin says that the “logistics” of the group are still in the works, but expects that the collection of groups that came together for the Rush amendment could become the core of this new coalition.

“It's amazing the outpouring of support we gathered, with over 100 groups signing up to back these amendments,” she told the National Interest. “We decided that we have to take this energy and channel it into a new coalition to vigorously challenge US policy towards Cuba.”