Putin Pushes Gas Deals as His Approval Falters at Home 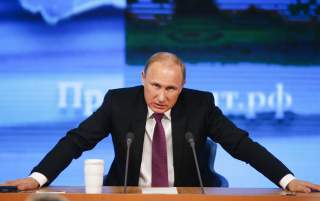 For a man routinely described as the chief antagonist of the West, Vladimir Putin’s domestic position is not looking too rosy. The rollout of recent pensions reforms has been ill-received by the Russian public, shaking a political establishment already weakened by poor economic performance and reeling under Western sanctions.

The reform effort has become the most significant political crisis to face the Kremlin in recent times. Ordinary Russians might have gone along with the government’s military ventures and held firm in the face of sanctions, but in proposing to increase the retirement age and weakening the social safety net, the government has touched a third rail not even its expert propaganda can put a positive spin on.

This sea change has even impacted how Russians see the United States. A separate poll showed 39 percent of respondents described their impressions of the United States as “mainly good.” That may not seem like an impressive approval rating at first glance, but it represents a 100 percent increase from 18 percent in May.

On the back of dollar rallies in August, declining wages, and rising inflation, the Russian public’s distrust of politicians has been quietly growing. With economic forecasts looking murky and sanctions biting hard, the Russian people have little appetite for more foreign policy adventurism—especially ventures that risk greater economic pain and further costs on the country’s budget.

How, then, will the state try to regain its footing? While some hawks may insist they hear war drums on the horizon, the Kremlin’s solution is likely to be much less dramatic—but considerably shrewder.

Putin, after all, still has a trump card. On Wednesday, he broke the silence and announced some changes to smooth over the impact of the pension reforms; the move covertly shifted the blame onto the cabinet. This strategy, which he has deployed repeatedly in the past, is the embodiment of the classic Russian proverb which states “the tsar is good; the boyars are bad.” In all likelihood, Putin’s inner circle and Dmitry Medvedev’s government will be sacrificed to protect the President’s popularity.

This deflecting of blame has served the Kremlin well thus far, but the government still needs to find a way to alleviate sanctions pressure and strengthen the country’s economic foundations. Moscow sees a potential solution for both challenges in its former Central and Eastern European satellite states. While the European Union has its hands tied with other crises, the Kremlin has been quietly tightening its grip over both regions by deploying, to much effect, its primary source of revenue and influence—energy.

The approach is simultaneously subtle and straightforward. In a bid to solve its economic problems, Russia is trying to parlay its energy assets into new assets and valuable market shares. In dangling substantial investments in front of friendly governments in European Union member states like Hungary and Bulgaria, Moscow is also hoping to cultivate support from these pro-Russian leaders when they take part in the EU’s internal deliberations on Russia policy.

Gazprom’s hold over Central Eastern Europe (CEE) energy markets is already well established. Its share of the European gas market, where it generates 37 percent of its total revenue, rose last year to a record high of 34.7 percent. Furthermore, Gazprom recently announced opening an electronic trading platform that could add an extra ten to fifteen billion cubic meters per year to overall volumes. There’s also Nord Stream 2, which enjoys the support of the German government despite opposition from the Trump administration.

The strategy goes well beyond Gazprom. Russia’s nuclear technology exports are growing as well, thanks to Rosatom’s aggressive selling strategies. The state-owned company, which boasts an order book in excess of $300 billion, won a €12.5 billion investment in Hungary’s Paks plant without a tender. The Czech Republic is set to announce how it plans to finance its new nuclear projects within the next three months, and Rosatom is widely tipped to bag the contract. In Bulgaria, President Rumen Radev supports resuming construction of a second nuclear power plant in Belene, which was put on hold in 2012 amidst pressure from Brussels to loosen ties with Moscow.

These deepening economic ties have even seen Russian interests displace Western companies. Hungary renationalized gas storage facilities and kicked out Germany’s EON, only to turn around and offer parts of it to Gazprom last year. Two of the country’s main energy traders also have ties to Gazprom. In Bulgaria, American investors AES and ContourGlobal—which are responsible for up to 20 percent of the country’s electricity production—have seen their power purchasing agreement challenged by the government. Since both firms have lower electricity rates than the Belene plant, the timing of the move smacked of Russian interference for many analysts.

The real aim of Russian expansion into CEE goes well beyond any single gas pipeline or nuclear reactor. Moscow’s overriding priority in the region is to undermine EU solidarity on the sanctions regime. Russian inroads in Hungary, Bulgaria and the Czech Republic virtually guarantee that recent appeals to EU leaders to follow America’s lead and slap even harsher sanctions on Moscow will find few takers on the continent. This is probably the case even if the EU is unlikely to lift its sanctions remains unlikely.

As long as Russia fails to come up with an economic strategy that significantly improves the living standards of its people and boosts weak growth rates, Moscow’s sight will be firmly fixed on CEE countries as allies who will defend Russia’s economic interests as their own.

Dmitriy Frolovskiy is a political analyst and independent journalist. He is a consultant on policy and strategy in the Middle East and Central Asia with private entities, and has written about Russia’s foreign policy toward the Gulf Cooperation Council states and former Soviet territories.