Realism Is About Understanding Different Country's Interests and Red Lines 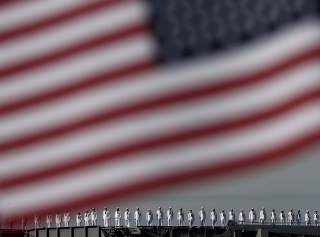 President Donald Trump’s foreign policy has taken quite a hit over the past several weeks, and the poor assessments from foreign policy analysts and journalists alike are beginning to leak onto the front-pages of America’s most popular newspapers. In a span of two days, the New York Times, the Washington Post, and USA Today all ran featured stories about the Trump administration’s struggle to cow three adversarial governments into submission: Iran, North Korea, and Venezuela.

Writing for the Times on May 12 David Sanger and Edward Wong observed that “Mr. Trump’s problems with all three countries reveal a common pattern: taking an aggressive, maximalist position without a clear plan to carry it through, followed by a fundamental lack of consensus in the administration about whether the United States should be more interventionist or less.” Former State Department negotiator James Dobbins made a similar observation to the Washington Post. He commented that “The president’s apparent tendency to brinkmanship brings with it a degree of danger—and it’s even more dangerous when it’s combined with a pattern of bluffing.” USA Today summarized Trump’s foreign policy as approaching an inflection point, “hitting the diplomatic rocks, with potentially disastrous results.”

In short, all three reports pin the blame for the lack of tangible success on Iran, North Korea, and Venezuela on President Trump’s negotiating acumen and the tendency of his national security staff to often stray away from their boss’s worldview. This interpretation, however, doesn’t provide us with much context or tell the full story of why Kim Jong-un’s nuclear weapons program is still alive and well, why the Islamic Republic is still bankrolling proxy forces across the Middle East, why and Venezuela’s Nicolas Maduro is still occupying the Miraflores presidential palace.

Granted, it’s not as if Trump is a blameless victim here. The Trump administration’s policies with respect to Iran, North Korea, and Venezuela are guided by highly unrealistic—some would say impossible—objectives. America also uses many sticks to force a change in behavior, but very little carrots as an incentive to inspire an evolution. Moreover, while all these adversaries are completely different countries, the White House is using the same maximum-pressure policy on all three. In essence, the administration is firmly of the belief that all the United States needs to turn up the heat.

That means leveraging the U.S. financial system to its maximum impact and scaring foreign businesses away from Iranian, Venezuelan, and North Korean markets. Additionally, Washington believes it can just wait patiently until their economies collapse and their governments are forced to (in the case of Iran and North Korea) enter negotiations on America’s terms or (in the case of Venezuela) throw their president to the wolves. If each of these regimes continues to be stubborn, then in the administration’s collective mind, the financial squeeze just needs to get a little tighter until the inevitable happens.

Yet it turns out that bullying a weaker country into doing what the stronger country wants is harder than it looks. This is not a problem exclusive to Donald Trump, but one reflective of a foreign policy establishment in Washington that continues to mistakenly operate as if it can attain whatever its heart desires. Officials, lawmakers, and national security denizens in Washington like to think that as the world’s only true superpower, the United States has the unique ability to get any adversary to capitulate by turning up heat on another country’s leadership, bankrupting its economy, destroying its export markets, and saber-rattling with threats of military force.

The problem with this mindset, however, is that the adversary gets a vote in international politics. Also, it just so happens that most regimes around the world prefer to keep themselves in business rather than folding up shop and going home. When existential issues are at stake, the United States should not expect a targeted country—even one in such fiscal distress as Iran—to submit when the costs of compliance are often higher than the benefits Washington is able to offer.

Iran is a perfect illustration. The Trump administration’s sanctions policy on Tehran is purportedly designed to coerce the Iranian regime into reentering a dialogue and agreement with the United States to become what Secretary of State Mike Pompeo has termed “a normal nation.” Normality, according to Pompeo’s list of twelve demands, includes Iran terminating uranium enrichment, stopping ballistic missile development, pulling all military and financial resources from Syria, severing its proxy relationships throughout the region, staying out of Iraq’s political affairs, and releasing all American detainees in its custody. From the standpoint of the United States, the asks sound reasonable enough; who, after all, wouldn’t want an Iran that no longer supports terrorism? Indeed, from Washington’s vantage point, it would be the definition of crazy for Tehran to not take the opportunity to sign such a deal when an end to the sanctions regime would be part of the trade.

What Washington labels crazy, though, Iran considers essential to accumulating leverage over its enemies and integral to its national security strategy in a highly combustible, hyper-competitive region of the world mostly populated by rivals. In fact, doing precisely what the Trump administration expects would very likely be the beginning of the end of the Islamic Republic as an idea. It would be similar in many ways to the Iranian government demanding that Washington stop rotating troops in the Persian Gulf, operating embassies in Arab capitals, and cementing trading relationships with the countries in the region. One country’s normality is another country’s kryptonite.

The same can be said with North Korea. Again, the administration is wedded to the notion that U.S. economic power will eventually compel Kim Jong-un to gift-wrap his nuclear stockpile, ballistic missiles, and chemical and biological weapons to the Americans for disposal. If the strategy fails and Pyongyang resists, then surely enacting more pressure on North Korea’s feeble economy will help Kim see the light.

Yet from where Kim sits, there is no incentive Washington could possibly put on the table that would come close to the regime security that nuclear weapons provide. While Kim would absolutely crave the perks of a healthier economy, he will steer clear of satisfying that craving if it requires him to eliminate a nuclear weapons program that makes the United States, or any country, think twice before launching any sort of military operation. It’s simply not worth the price.

One can take issue with President Trump’s negotiating style, his hiring choices, his past decisions, and the direction his foreign policy appears to be traveling. Those are all fair and legitimate reservations to have. But we should not allow the obsession with Donald Trump to obscure the larger point—just because a government is weak in relation to the United States doesn’t mean it will fold easily.