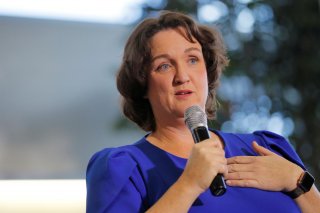 Rep. Katie Porter (D-Calif.) is well-known as a champion for accountability in government and in the private sector. Whether tackling price gouging in prescription drug markets, speculative trading and outright fraud among financial institutions, or monopolization in the tech industry, her reputation as a public advocate is a result of the bold legislative efforts she has led as well as the audacious, and oft-viral, cross-examinations of business executives, lobbyists, and appointed public servants.

The congresswoman also happens to be a vocal critic of the wasteful spending and flawed rationales that underpin our nuclear weapons systems, a topic she recently discussed on the Press the Button podcast.

“We really need to push back on some of the assumptions, the figures, the thinking that has been animating our nuclear weapons programs,” she recounted to guest host Farshad Farahat, “because it is proving time and time again to be wrong.”

As a member of the Committee on Oversight and Reform (and chair of the Subcommittee on Government Operations), Porter knows well the degree to which these programs are at once overfunded, unnecessary, and underperforming. “The Congressional Budget Office, which is nonpartisan, has told us that the nuclear weapons programs are going to be $62 billion over budget in the next ten years,” said Porter. “So, this is a program that we need to be reevaluating, asking ourselves, ‘should we be reinvesting in something that is being mismanaged?’”

For Porter, these are conversations and debates that also need to become more democratic and inclusive. “There should be a thoughtful, well-developed public debate—with full oversight and transparency, including to the American people—about what we’re doing with our nuclear weapons program, and whether it’s delivering the kind of national security and international peace that we all should be aiming for.”

The lessons of the past, she contends, are an equally vital part of these conversations. Pointing specifically to the underreported history of U.S. nuclear testing in the Marshall Islands during the Cold War, Porter argues that an honest reckoning with our past will ultimately enable better policy decisions. “This is a great example of the need to look back at what we have done, with clear eyes, to acknowledge the wrongs, to try to make them right, and then to learn from that as we try to set our nuclear weapons and climate change policy going forward,” she said.

Although Rep. Porter’s vision is for a heightened debate at the national level, its implications resonate well beyond America’s borders. “One of the things about diplomacy is that it isn’t an ‘on or off’’ switch—you can’t do it today and change your mind tomorrow. It is based fundamentally on trust, and trust requires time to build, between people, between nations.”

Though there is much work ahead, Porter hopes to rebuild that trust.

The entire interview with Rep. Katie Porter is available here on Press the Button.