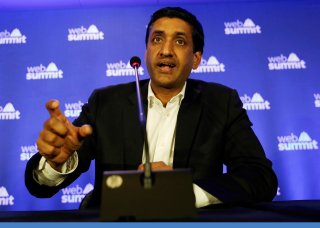 The United States should use funding to prevent China from taking over international bodies like the World Health Organization, Rep. Ro Khanna (D-Calif.) told his constituents on Thursday.

President Donald Trump cut off U.S. funding for the World Health Organization (WHO) on Tuesday, as Republican allies accuse the organization of functioning as “a propaganda arm of the China Communist Party” amid the coronavirus pandemic. Khanna, a leading progressive voice on foreign policy, argued that the move would actually exacerbate the problem.

“If we want more transparency from countries participating, we ought to be funding the World Health Organization, and insisting on reform and reporting requirements so that countries are held to account,” Khanna told his constituents at a Thursday video town hall.

He was elaborating on an argument that he had made in a Tuesday conference call with reporters.

“Obviously, China has not been transparent about the coronavirus. Those are just the facts,” Khanna continued. “But the solution to that is not to withdraw our funding to the World Health Organization, and let China and other countries take over these organizations.”

U.S. officials have grown more critical of the Chinese government’s role at the beginning of the novel coronavirus pandemic. Unnamed officials told Fox News on Wednesday that they believe that the virus was released in an accident at the Wuhan Institute of Virology, close to the animal market where the novel coronavirus disease first emerged.

Gen. Mark Milley and Defense Secretary Mark Esper, the two highest U.S. military officials, told reporters that the evidence leans towards a “natural” origin for the virus. Secretary of State Mike Pompeo said that “there is still lots to learn . . . the United States government is working diligently to figure it out.”

The World Health Organization has been accused of ignoring warnings from Taiwan, a state that China considers to be a renegade Chinese province.

Khanna talked about a vision of a world order with “American leadership and liberal democracies leading these organizations.”

He also condemned a “Cold War” mentality that inflates military threats over national security threats like climate change, pandemics and “the rise of nationalism.”

The California congressman has been a rising star in progressive circles, especially on foreign policy issues. He served as campaign co-chair for Sen. Bernie Sanders (D-Vt.), who recently ended his 2020 presidential bid but whose advisors are expected to play a role in Democratic nominee Joe Biden’s policy platform.

Khanna told the National Interest during his Tuesday conference call that he intends to continue working for change from inside Congress.

“I love representing Silicon Valley, and I think this crisis has shown that we’re dealing with some of the most important issues of our time,” he said.