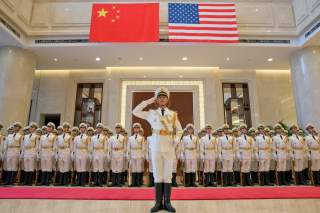 Instead, the United States needs to recognize and acknowledge the emerging limits on its power, influence and position in East Asia; and accordingly reassess both its definition of its interests in the region and the strategies by which it will pursue and defend those interests. If U.S. primacy in the region is not materially sustainable, it becomes untenable to define it as a vital interest that must be upheld. Indeed, over the long term Washington will have to confront the question of whether there is a version of Chinese primacy in East Asia which—being neither exclusive nor hostile, and akin to U.S. primacy in the Western Hemisphere—would be compatible with American interests and thus acceptable to the United States.

None of this means that Washington should withdraw its military forces or commitments in East Asia, downgrade its diplomatic and economic engagement with the region, and surrender the Western Pacific to a Chinese sphere of influence. Quite the contrary. The United States needs to redouble its commitments, and expand and accelerate its engagement, in order to reassure its friends and allies in East Asia and reaffirm its determination to sustain a sphere of influence and a decisive role there. The U.S. alliance network can and should remain central to this effort. It will still be key to balancing, leveraging, guarding and pushing back against China when Beijing overplays its hand in its own pursuit of regional power and influence.

But Washington should not approach this competition on the basis of outdated assumptions—including the belief that U.S. primacy in East Asia can and should be perpetually sustained (an obsolete world view), a misunderstanding or mischaracterization of China’s regional ambitions, or a miscalculation of the United States’ own power and leverage. Washington should accept that strategic competition is unavoidable and absolute security is not possible. It should also recognize that even U.S. allies and partners in the region are already operating within overlapping American and Chinese spheres of influence—and they prefer this to being forced to choose between Washington and Beijing.

The United States can and should continue to exercise leadership in East Asia, but will need to share it with China. Washington should seek to deescalate the current trend in the regional competition with Beijing—which is now heading toward a destabilizing and futile game of “king of the hill”—and instead pursue opportunities to engage Beijing toward establishing a long-term, stable balance of power in the region. This is a tall order that will challenge the diplomatic and security management skills and finesse of both sides, and will almost certainly remain a work in progress for many years. But it will always be preferable to an arms race or a cold war in East Asia.

Paul Heer served as National Intelligence Officer for East Asia in the Office of the Director of National Intelligence from 2007 to 2015. He has since served as Robert E. Wilhelm Research Fellow at the Massachusetts Institute of Technology’s Center for International Studies and as Adjunct Professor at George Washington University’s Elliott School of International Affairs. He is the author of Mr. X and the Pacific: George F. Kennan and American Policy in East Asia (Cornell University Press, 2018). The views expressed here are his alone.