RIP: The Era of Arms Control Is Over 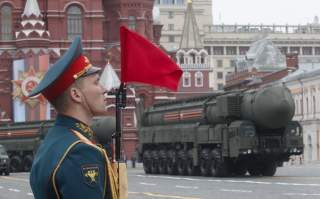 There are no if’s, and’s, or but’s about it: the era of arms control is slowly unraveling underneath our noses.  And U.S. national security officials don’t appear to have any intention of doing much to stop it.

In a span of 15 months, the United States has unilaterally withdrawn from two major arms control agreements. The Joint Comprehensive Plan of Action and the Intermediate-Range Nuclear Forces Treaty are two completely different pacts meant to address two completely different problems—the first was a multilateral solution to a potential nuclear proliferator; the second a legacy of the Cold War—but both were quite effective at putting some guardrails on what could have very well been a period of further proliferation. With the JCPOA barely holding water, the INF as dead as disco, and the Open Skies Treaty reportedly next on the chopping block, it’s increasingly looking arms control is a dying concept.

Today, there is only one agreement between the United States and Russia that is preventing the two nuclear-armed superpowers from going their own way and building as many nuclear weapons as they wish. The New START treaty, ratified by the U.S. Senate nine years ago, restricts the number of nuclear warheads both sides can deploy at any one time to 1,550 and caps the number of deployed launchers (ICBM’s, SLBM’s and bombers) to 700. The treaty keeps Washington and Moscow honest by allowing both to conduct on-site inspections and verification missions on each other’s territory. Information exchanges are formalized under the treaty as well, which in turn gives U.S. and Russian intelligence officials additional confidence that the nuclear restrictions spelled out in the treaty are being met.

There is only one problem: if Washington and Moscow don’t get to work soon and extend New START for another five years, the entire treaty—and all of the restrictions, caps, and verification protocols embedded within it—will disappear by February 2021.

An extension should be a no-brainer for both parties, none of whom would be served in a world where strategic stability and predictability are removed. Adding time on the clock is the kind of rare, low-hanging that the U.S. and Russia shouldn’t think twice in gobbling up—especially when the bilateral relationship is becoming exceedingly toxic. The Russians are ready to give the agreement a new lease on life and indeed have been ready for quite a while. The U.S., on the other hand, is foolishly allowing the expiration date to come closer and closer without any action whatsoever.

There are a number of reasons for the Trump administration’s indecision. Some officials (like ex-national security adviser John Bolton) are philosophically opposed to arms control agreements, arguing that they inherently disadvantage the United States by limiting its freedom of movement while allowing other competitors to catch in both capability and raw numbers. Trump seems ambivalent about a New START extension for personal and political reasons: personal because he views himself as the grand wizard of dealmaking; political because New START is a product of the Obama presidency. Many others, including Secretary of State Mike Pompeo and Defense Secretary Mark Esper, are concerned that keeping New START as is would let China off the hook at a time when the Asian power is in the process of modernizing its strategic weapons systems and building up its already considerable ballistic missile inventory.

There is some legitimacy to the China angle. Gen. Robert Ashley, the director of the Defense Intelligence Agency, assessed this May that Beijing could double its nuclear weapons stockpile over the next decade. Nobody—not the United States, not Russia, not India, and certainty not Japan—wants to see a China with 500 or 600 nuclear warheads. Academically, bringing the Chinese into strategic stability talks and prodding them into a trilateral arms control deal makes a good deal of sense.

Practically speaking, however, it’s next to impossible for the Trump administration to actually achieve this objective. While Chinese officials likely wouldn’t oppose discussions with Washington and Moscow on general principles such as clarifying one another’s nuclear doctrines and improving communication to minimize misunderstandings, they are strongly opposed to becoming a party to a revised New START. In the eyes of the Chinese national security establishment, it doesn’t make a whole lot of sense to pretend that their nuclear arsenal is part of the problem when the U.S. and Russia continue to possess a combined 90% of the world’s nuclear warheads.  With an arsenal at roughly 1/22nd the size of the United States, China sees no reason to agree to its own reductions as long as the U.S. and Russia continue to have thousands between them.  As a top Chinese nuclear expert told the Carnegie Endowment’s George Perkovich this summer, “even if China doubled its arsenal to 600 weapons and deployed them, that would still be thousands less than the United States and Russia each have.”

The Trump administration apparently hasn’t gotten the memo from the Chinese: if you think we are going to participate in a trilateral reduction agreement when you still have over 6,000 nukes under your nose, you’re dreaming.

It’s understandable why President Trump would court a three-way nuclear deal instead of simply adding five more years to New START, a pact that doesn’t include China at all. Compared to an extension of a previous treaty, a new comprehensive U.S.-Russia-China agreement encompassing all different types of weapons, from tactical nukes to hypersonic weapons, would be a blockbuster of an accomplishment.

The keyword, though, is “would.”  Back on planet Earth, such an accord is the stuff of fiction. It’s not going to happen, period. And to hold the last U.S.-Russia arms control agreement hostage to a childlike fantasy is deeply irresponsible.