The Rocket’s Red Glare: Trump Must Withdraw from Middle East Before Its Too Late 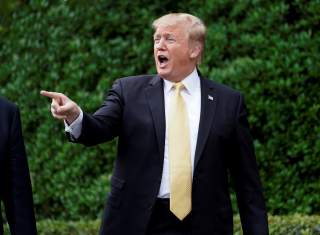 Late last month a barrage of rockets slammed into the dining facility at the U.S. embassy in Baghdad, thankfully injuring only one. Since there are no United States security interests at stake in Iraq or Syria, it would be irresponsible in the extreme to keep our troops there – just waiting until a future such attack succeeds in killing our fellow citizens.

It is time to withdraw them all before one more drop of American blood is shed.

This latest strike against the Embassy is merely the most recent of a growing spate of rocket attacks against U.S. military bases in Iraq since early last month. Beginning on December the 3rd, several rockets hit the Al-Assad Air Base in Iraq but caused no casualties.  Unknown assailants launched another rocket attack two days later at Balad Base, again with no casualties. On December 9th, yet another attack, this time near U.S. troops at Baghdad’s International Airport, wounded several Iraqi troops.

America’s luck finally ran out, however, when a U.S. contractor was killed and three soldiers wounded in a rocket attack on December 27th – the 11th in the preceding five weeks – that struck near Kirkuk.  In retaliation, President Trump ordered a coordinated aerial attack two days later against the Iraqi Shia militia group Kataib Hezbollah, in which 25 Iraqis were killed and another 51 injured.

This attack spawned a predictable response from other Shia militia members in Iraq. On New Year’s Eve, hundreds of Shia protesters stormed the gates of the American Embassy in Baghdad, setting fire to several structures and hurling rocks at U.S. Marines.  By the end of the second day, the Iraqi government restored order and the protests ended, with no Americans being killed or wounded.

But continuing the cycle of escalation, Trump then ordered a drone strike on January 3rd which killed a senior Iranian general accused of fostering the action against the embassy. This, too, had the predictable response from Iran and on January 7th, they attacked the Al-Assad Air Base in Iraq with about a dozen missiles, wounding 34 American troops.

Though the Iranian foreign minister said Teheran would not retaliate further, many of the independent Shia militia in the region have vowed revenge of their own. Sunday’s rocket attack is just the latest, and without question won’t be the last. The question, then, is how much longer will Washington keep troops on the ground in Iraq and Syria when they are, quite literally, sitting in the desert waiting for the next rocket to land?

If our troops were in harm’s way because of a compelling national security threat to our country, most Americans and virtually all our deployed serviced members would willingly shoulder the danger and risk. After all, they volunteered to serve because they love their country and are willing to sacrifice their life, if necessary, to protect fellow Americans. However, when no such risk to our security exists, it is wasteful and foolish – if not criminally negligent – to pointlessly sacrifice American lives in the Middle East.

If more American troops are killed in the next rocket attack, the president will again come under enormous pressure to retaliate against the perpetrators. As Trump has often boasted, it won’t be a tit-for-tat response, but like the 29 December attack against Kataib Hezbollah, out of proportion to what we suffered. What is the likely outcome of such a heavy response?

The immediate reaction from many in America will be to praise Trump for his willingness to defend U.S. personnel from enemy attack.  Yet the longer-term results will be merely the continuation of the cycle of escalation, reprisals, and retaliation that has been going on for some time now.  Already it has resulted in the deaths of one American, the storming of the embassy in Baghdad, and a total of 38 personnel wounded.

Each series of attacks/retaliation/revenge gets more and more people killed, yet contributes nothing to American security, prosperity, or liberty. To the contrary, each heavy strike by Trump increases the number and ferocity of those in the region vowing to kill other Americans – and each time they succeed, Trump has to up the ante by hitting back even harder.

It should be clear beyond question by now that radical and violent groups in the region are not going to be cowed by a few targeted killings. Each time we take out key leaders, they are quickly replaced and the urgency of the enemy to attack Americans rises.  Trying to out-kill the enemy is a losing proposition that cannot succeed. We should stop putting our sons and daughters’ lives at risk in the vain attempt.

What we very much need to do, however, is to acknowledge the futility of our failed policies in the region over the past two decades, recognize that military power is never going to produce a positive outcome for our country, and withdraw our troops from both Syria and Iraq. Failing to do so guarantees continued failure and may lead to an all-out war with Iran.  We dare not wait for such a catastrophic and entirely predictable outcome.