Russia’s Patriotic Cinema—and Why It Matters 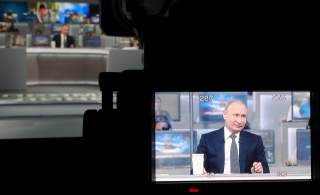 It would be “cultural masochism” to support art critical of Russia. So says none other than Vladimir Medinsky, the Russian minister of culture. A trusted Putin loyalist and the author of a book series remarkable for its revisionist take on Russian history, Medinsky has spent his six years as Minister of Culture expanding the Ministry’s control over all things artistic in the country.

In a country like Russia, where the government has significant control over the art—and specifically films—being produced, that art can provide enlightening information for foreign policy makers. Simply put, films coming out of a country that ecstatically embraces an authoritarian regime can offer the interested onlooker one of two things: films made by directors close to the regime can divulge key aspects of the government’s rhetoric and ascertain its domestic and foreign policies; films made by directors not close to the seat of power can function as a barometer of public sentiment.

For several years, Russia’s Ministry of Culture has been actively funding the cinematic endeavors of its “court bards.” Though these films ostensibly function as entertainment, they inevitably toe the party line and offer the government another outlet to persuade audiences of its excellence, reinforcing on a more subliminal level what government representatives proclaim explicitly in interviews.

Take Sobibor, released just two months ago. Originally Medinsky’s own brainchild (in his own words, he “wrote the story over the weekend”), directed by and starring Alexander Khabensky, the film purports to tell the story of the 1943 uprising at the Sobibór concentration camp in Poland. According to historical accounts, when the Jewish inmates heard that the camp would soon be closing, they created an underground committee tasked with organizing a breakout. When Soviet POWs were then brought to the camp, members of the underground actively recruited them to aid their efforts, and one Alexander Pechersky ultimately led the uprising.

In Medinsky’s telling, however, Pechersky and his comrades enter a camp of submissive sheep and proceed, with a grim sense of responsibility, to organize the feckless captives. The cinematic version of events portrays the Russian soldiers as arriving to save the day, ignoring or minimizing issues of ethnicity (Pechersky and the others were Jewish) to focus on his role as a good Soviet soldier.

The resulting message is straightforward, and directly relevant to Russia’s contemporary political situation. Sobibor not so subtly argues that the responsible and professional Russian military will not hesitate to liberate the oppressed from the yoke of a fascist junta, be it in occupied Poland during Nazi times or in Ukraine as it is portrayed on Russian state television today. The film seeks to convince the audience that its faith would be well-placed in the military, which vigilantly pursues only the noblest of goals.

The 2017 sci-fi action film Attraction (Prityazheniye) conveys a similar message. Directed by Fyodor Bondarchuk—a member of Putin’s “United Russia” party—Attraction tells the story of an ordinary Russian teenage girl helping a marooned alien (who assumes the form of an attractive Russian youth) make his way through Moscow back to his spaceship. Despite a few curious moments, and standard science fiction plot twists, the film’s overarching message is clear—that Russia’s military is mighty, competent, fully in control and is the institution most deserving of the populace’s faith.

By contrast, the Russia depicted in the films of directors who are not being breastfed by the government is starkly different. Despite receiving a part of their funding from the Ministry of Culture, films like Andrei Zvyagintsev’s Leviathan (2014) or Boris Khlebnikov’s Arrhythmia (2017), as well as films that received no help at all, like Vladimir Kott’s Thawed Carp (2017) and Zvyagintsev’s Loveless (2017), portray a bitter nation in the throes of perdition. All four of these films show deteriorating familial relationships, outdated technology and ideas, public services and servants that are corrupt to the bone, and ordinary citizens all of whom are dissatisfied with their lives, locked in a losing battle with apathy. A more penetrating look at such films across different directors would yield a comprehensive understanding of contemporary public sentiment, just like an analysis of films made during Brezhnev’s Stagnation would have.

The pattern is unmistakable. Despite some deviation, films made by directors close to the regime generally tend to propagate the party line, while more “outsider” directors, if they can even be called that, portray the utter obscurantism currently endemic to the nation, either to rile up their audience by showing them a reflection of their grim reality or merely in order to show the societal wastes of Russia out of which they see no exit without radical change.

By their nature, films tend to offer a bounty of information about public sentiment and political rhetoric in a nation. This is especially true in authoritarian regimes—a description that applies to today’s Russia under Vladimir Putin.

As such, foreign policy makers—keenly attuned to the official rhetoric coming out of Moscow—would benefit from paying more attention to what Kremlin supporters and critics are saying more subtly and indirectly, through mediums such as cinema. Doing so is likely to yield a much more nuanced and accurate understanding of Russia’s political and social currents than that which prevails currently, either in Washington or in European capitals.

Alexander Rojavin is a researcher at the American Foreign Policy Council in Washington, DC.