Russia Is Not The Soviet Union. So Why Can't Europe Help Pay More for NATO? 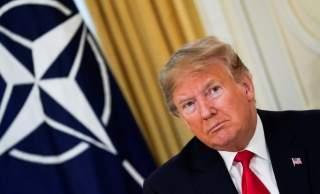 French President Macron claims NATO is “brain dead.” Turkey’s President Erdogan threatened to flood Europe with a wave of refugees if Europe opposed the Turkish incursion into Syria. And Trump has announced he is going to curtail U.S. support to NATO headquarters. On  NATO’s 70th anniversary, the alliance seems to be growing weaker and its future called into increasing doubt. The question for American policymakers: is that necessarily a bad thing?

A careful examination of America’s interests and NATO fundamentals suggest it might be time to let the sun go down on NATO.

Without question, the North Atlantic Treaty Organization was one of the 20th Century’s greatest success stories and largely responsible for securing the peace for Western Europe following World War II. In the late 1940s Stalin’s Soviet Union posed an existential threat to the war-weary democracies of Western Europe.

At the time, Soviet military power could have overwhelmed the combined efforts of France, West Germany, and the UK, and thus put American security at risk. The USSR no longer exists, however, and it is time to admit that Cold War structures are jarringly out of place in a post-Cold War.

This is not to suggest that NATO should be dismantled immediately, but an examination of several key metrics illustrates that major changes are needed.

When NATO was founded in April 1949, the USSR drastically outgunned the Western nations’ combined military power. They had more tanks, more military aircraft, and more men underarms. Four months after NATO’s founding, the Soviet Union became a nuclear weapons state. Without the backing of American military power, the entire continent could have been swamped by the Red Army.

Today, in stark contrast, the Russian state is but a shell of the power once wielded by Stalin’s Kremlin. The European Union dominates Russia in a number of key ways, illustrating that the balance of power has shifted decidedly west. The EU has three and a half times the population as Russia, has 11 times the GDP, and outspends Russia militarily by four to one.

The bottom line is that even if Russia wanted to dominate or invade Western Europe, they don’t have the ability to do so. And while many pundits in America treat Putin’s Russia like a modern-day Stalin’s USSR, it is clear those with the most at stake do not.

One of the key tenets of NATO’s founding principles was Article 3 which obligates each country to “maintain and develop their individual and collective capacity to resist armed attack.” During the Cold War, each European state did just that, spending close to 3 percent of GDP on defense, maintaining robust ground and air forces.

For example, in 1981, West Germany spent 3.2 percent GDP on defense, but now Germany spends barely 1.3 percent. Despite all NATO nations pledging in 2014 to spend at least 2 percent GDP on defense, a half-decade later a stunning 22 NATO members remain below the target. The reason is clear: they do not view the threat from the east to be existential in nature and they believe the United States will continue to be their security guarantor.

Trump has been a major disrupting figure in many ways since his inauguration, but there is also a positive aspect of his willingness to challenge convention. A long line of American presidents have complained about NATO’s unwillingness to meet its financial obligations but none have taken action and America has continued to pay far more than a fair share of Europe’s defense. Trump is right that it’s time to change that dynamic

With the Cold War over, the Russians pose a real nuclear threat, but they are more than counterbalanced conventionally by Europe’s combined ground, air, and naval forces. Until the United States makes good on its promise to reduce its contribution to NATO in line with current strategic realities, European countries will continue to be more than happy to maintain the status quo and allow Uncle Sam to shoulder part of their load.

American security is not dependent on being the first responders for the entire European continent when many of these countries can do much more for their own defense. It is not right to impose what is effectively a financial penalty on the American taxpayer by perpetually underwriting Europe’s security. It is time to begin taking firm, appropriate, and predictable action to bring our contributions to European security in line with our own security needs.