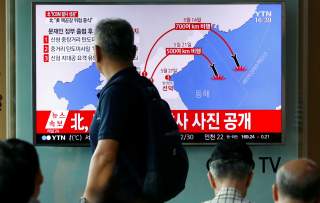 The reports on North Korea’s nuclear and ballistic missile program keep on coming.

First, in November 2018, the Middlebury Institute of International Studies in Monterrey, California discovered a new missile base with an underground compartment near the previously known Yeongjeo-dong facility close to the Chinese border. Then, in January 2019, the Center for Strategic and International Studies in Washington, DC probed the undeclared Sino-ri missile operating facility, one of an estimated 20 missile facilities the North Koreans have yet to officially declare to the international community.

Now, this week, we have a third report from Stanford University’s Siegfried Hecker, Robert Carlin, and Elliot Serbin concluding that Pyongyang’s nuclear weapons program remains highly active in the midst of denuclearization talks with the United States. The three nuclear experts observe that North Korea has likely produced an additional 5-8 kilograms of weapons-grade plutonium and about 150 kilograms of weapons-grade highly enriched uranium last year. “We also expect that the production of warheads most likely continued during the year,“ the report says, all of which occurred despite discussions U.S. and North Korean officials have been having since the middle of last year.

With all of this information in our inboxes, should we be as alarmed as the headlines suggest? Is it time for President Donald Trump to just walk away from the diplomatic process entirely in protest of Kim’s supposed deviousness? Is Kim practicing the art of “grand deception,” as New York Times national security correspondent David Sanger hinted last month?

No. We ought to take a step back from the ledge, exhale deeply, and put all of these reports in context. Here are three things we should keep in mind as we peruse the avalanche of negativity that will make its way into the media in the week ahead.

Why Wouldn’t Kim Be Producing Fuel?

To open up a newspaper and read news that North Korea is continuing to enrich high-grade uranium, reprocess plutonium, and work on bomb miniaturization is about as surprising as turning on Fox News and watching pundits yell at each other in the studio. In other words, it’s not surprising at all—and it’s beyond curious why we continue to treat it as such.

While one can make the argument that Pyongyang’s continued nuclear activity runs counter to the spirit of U.S.-North Korea diplomacy, one can’t claim that Kim is violating the letter of the diplomacy. The reason is simple: Kim hasn’t signed anything. There is no hard document outlining binding denuclearization steps the North must follow on a stringent timetable. Kim hasn’t agreed to do anything other than keep the diplomatic process alive and maybe, just maybe, open up Yongbyon to international inspections—assuming the United States will take “corresponding steps” in return. Why would the regime place a unilateral moratorium on its warhead development, missile production, and bomb fuel production out of the goodness of its heart? Answer: it wouldn’t.

Kim Is Doing What He Said He Was Going to Do

Press rewind to New Year’s Day 2018, before the “Moon Miracle” picked up steam and five months before Trump defied convention by shaking Kim Jong-un’s hand. This was the speech in which Kim declared North Korea’s nuclear development was complete. But just as importantly, it was also the speech in which Kim issued a new directive to his nuclear scientists and technicians: “The nuclear weapons research sector and the rocket industry should mass-produce nuclear warheads and ballistic missiles.” Pretty self-explanatory.

More than thirteen months later, the North Koreans are doing just that. Centrifuges are spinning. Research on the re-entry vehicle for ICBM’s is almost definitely ongoing. The number of warheads is growing. And spent plutonium is being reprocessed into weaponized bomb fuel. All of this points to Kim Jong-un as a quite predictable head-of-state who issues orders and expects his subordinates to execute them.

Not to sound callous, but all of these studies may not mean a whole lot in the end because the Kim regime still cherishes its nuclear arsenal and is highly unlikely to give it up regardless of what the United States offers. At least that’s the judgment of the U.S. intelligence committee. According to the 2019 Worldwide Threat Assessment, the intelligence community continues “to assess that North Korea is unlikely to give up all of its nuclear weapons and production capabilities, even as it seeks to negotiate partial denuclearization steps to obtain key US and international concessions.”

Director of National Intelligence Dan Coats has never been especially optimistic that Pyongyang will disarm. Speaking at the Aspen Institute in July 2017, Coats made the perceptive observation that Kim has taken the experiences of Saddam Hussein and Muammar al-Qaddafi to heart. Kim “has watched, I think, what has happened around the world relative to nations that possess nuclear capabilities and the leverage they have and seen that having the nuclear card in your pocket results in a lot of deterrence capability.”

If a U.S. adversary doesn’t possess nuclear weapons, then it’s liable to be invaded or bombed by the United States eventually. But if the adversary does have a nuclear arsenal and can demonstrate it’s credible, then Washington will think twice before loading the bombers at Andersen Air Force Base.

The nuclear weapons program is Kim’s security blanket. If Trump is lucky, then he may be able to strike an agreement with the young dictator in which Pyongyang’s future capability is capped and the ICBM is demobilized. But anything more than this would quite frankly be a miracle.