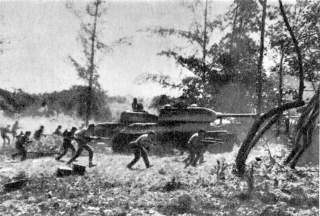 As events continue unfolding in chaotic Venezuela, the big question on everyone’s mind is whether the United States will use its military to force Maduro out. As Trump continues to grapple with the decision, it might be instructive to consider the last time an American president faced such a decision. John F. Kennedy’s failure at the Bay of Pigs forever tarnished his presidency—and the negative consequences still plague our country.

Sixty years ago, Fidel Castro led a revolution in Cuba that ousted the U.S.-supported dictator, Fulgencio Batista. While Batista brutally repressed the population of Cuba, he had been very accommodating to U.S. tourism and business interests. Many powerful figures in the United States, therefore, were none too happy when Castro took over. President Dwight D. Eisenhower was one of them.

When it became clear that Castro could not be controlled or bought—and especially with Castro’s increasing embrace of the Soviets—Eisenhower, with the concurrence of Vice President Richard Nixon, decided he had had enough, and instructed CIA director Allen Dulles to begin working up plans to overthrow Castro. When Nixon lost the presidential election later that year, the plan fell to the new commander-in-chief, John F. Kennedy, to carry out.

Initially, Kennedy’s priorities lay elsewhere, and though he received a few briefings, he gave it little attention. The Pentagon and CIA, however, continued planning and preparation, sending a group of fighters—recruited mainly from disaffected Cubans living in Miami—to a secret training camp in Guatemala to begin intensive combat training for fighting in the mountains and jungles of Cuba. At a meeting on 15 March, Kennedy gave his initial go-ahead for an invasion at the Bay of Pigs in southwest Cuba.

The plan initially called for a group of Cuban exiles—about 1,400 men who called themselves the 2506 Brigade—to land on a beach in Cuba, fight their way to the mountains, and begin a guerilla war against Castro. The CIA’s belief was that Castro was widely hated in Cuba and once the exiles began fighting on the island, there would be a popular uprising and Castro would be defeated or deposed.

To effect this invasion, Cuban pilots would be given old American B26 bombers repainted to hide American markings and give the impression of Cuban pilots who had defected from Castro. These bombers would attack and destroy Castro’s small air force on the ground before the beach landings to ensure the defenders couldn’t prevent the assault.

Kennedy wanted to ensure that no overt U.S. military personnel were involved so as to give plausible deniability that America was behind the attacks. He was concerned about the growing Soviet cooperation with Cuba and feared that in a worst-case scenario, if Khrushchev thought the United States were invading Cuba, they might join the fight and retaliate directly against the United States. The plan went awry even before the operation got started.

In a shocking development, on 7 April, fully ten days before the planned start of the operation, the New York Times revealed the plan in stunning detail. “For nearly nine months,” the story began, “Cuban exile military forces dedicated to the overthrow of Premier Fidel Castro have been training in the United States as well as in Central America… Its purpose is the liberation of Cuba from what it describes as the Communist rule of the Castro regime.”

This should have ended the operation, as all surprise was now lost and implications of U.S. government involvement were strong. Kennedy’s instincts told him it would fail and he should scuttle the mission. But too many in the president’s inner circle of advisors convinced Kennedy that the development would not fatally undermine the plan. He was not strong enough to withstand the influence of experienced advisors, and so decided not to cancel the mission. He would come to regret the decision.

Next, the planners compounded the strategic blunder of the leaked plan with a tactical error. On 15 April, the makeshift air force of B26 bombers attacked three airfields near the landing zone in the Bay of Pigs. Because Castro was on alert as a result of the New York Times piece, his forces were on high alert and the damage from the airstrikes was limited.

Moreover, now fully convinced an invasion was coming, he fully mobilized his population, readied his fighter planes, and had military and militia personnel on standby. When the attack began on 17 April, Castro and his troops were ready. It was a bloodbath.

Many of the landing craft were attacked and sunk before hitting the beach. The rest of the invasion force was pinned down on the beach. The antiquated air force Castro had was still enough to defeat unprotected men on the beach. The members of the 2506 Brigade begged the United States for air support.

If they could get American fighters and bombers to destroy Castro’s defenders on the beach, they believed they could move inland and execute the plan. Kennedy would not permit such open use of the U.S. Armed Forces and denied the request. All the exiles were either killed, wounded, or captured.

At an emergency meeting at the United Nations, the Cuban ambassador directly accused the United States of bombing his country. American Ambassador Adlai Stevenson—who had been kept in the dark about the operation—denied the accusation with passion, saying the charges “are totally false and I deny them categorically. The United States has committed no aggression against Cuba and no offensive has been launched from Florida or from any other part of the United States.”

That was, of course, wrong. The operation had been planned at the highest levels of government, including the White House, the Pentagon, and the CIA—which was now blatantly obvious to all. While Kennedy didn’t come clean about everything that had happened, he did honestly address publicly why he didn’t employ the U.S. military assets.

At a speech on 20 April, just three days after the operation had begun, Kennedy addressed the American Society of Newspaper Editors and plainly explained that the news about the operation “has grown worse instead of better.” But amidst the mistakes he had made, the president did clearly articulate his rationale for not worsening the situation by inserting the Armed Forces of the United States.

“Any unilateral American intervention, in the absence of an external attack upon ourselves or an ally,” he explained, “would have been contrary to our traditions and to our international obligations… But let the record show that our restraint is not inexhaustible.” If the communists should ever mistake his restraint for indecision and take action antithetical to U.S. interests, “then I want it clearly understood that this Government will not hesitate in meeting its primary obligations which are to the security of our Nation!”

In the aftermath of the disaster, Kennedy vowed he would never again be cowed by overbearing advisors. He fired senior leaders and advisors, including even the Director of the CIA, Allen Dulles. Though the cost of the Bay of Pigs disaster was high, Kennedy’s strengthened resolve proved decisive in resisting calls for a nuclear attack by the Joint Chiefs of Staff during the Cuban Missile Crisis the following year, and the security of the nation was preserved.