South China Sea Showdown: Here's How America Is Trying To Contain China In Its Own Backyard 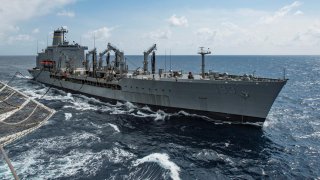 Recent US diplomatic and military moves in the Pacific theater are conveying a strong message to both friends and foes that Washington is determined to preserve the hegemonic status the United States has enjoyed since the end of World War II. The latest confirmation is the addition of the Pacific Deterrence Initiative (PDI) to the 2021 National Defense Authorization Act. Both the PDI and other US actions are implicitly directed against one target: the People’s Republic of China (PRC). Over the past decade, and especially during President Donald Trump’s administration, the perception has grown within America’s political and policy elites that China is no longer a constructive economic and diplomatic partner. Instead, officials see Beijing as a strategic competitor at best and an outright adversary at worst.

That mounting mistrust of Beijing has several sources. US military leaders have watched with growing unease for years as the PRC’s military budget ballooned and funds were directed disproportionately to the development of sophisticated anti-ship missiles and other anti-access, area denial systems. The primary purpose of such programs was to raise the cost severely to the United States if Washington sent its air and naval forces to defend Taiwan or otherwise interfere with PRC strategic goals in waters near China. An increasingly bold foreign policy agenda has accompanied Beijing’s new military muscle.

China has pursued its extremely broad territorial claims in the South China Sea by building artificial islands onto half-submerged reefs – construction extensive enough to accommodate military airfields and other fortifications. Beijing’s challenge to Japan’s assertion of sovereignty over the Senkaku island chain has become highly visible, including using a growing fleet of fishing vessels to play quasi-military roles and emphasize a Chinese presence. The PRC’s warnings to Taiwan to abandon any hopes of avoiding negotiations for political reunification with the mainland have become ever more pointed and emphatic.

The United States has responded in a variety of ways to counter Beijing’s ambitions. The number of so-called freedom of navigation patrols in the South China Sea has expanded markedly, despite the PRC’s angry complaints. Washington is making even larger displays of naval power in that region. Twice in July 2020, the Pentagon sent two aircraft carrier strike groups, led by the USS Nimitz and the USS Ronald Reagan, into those waters for joint drills. That was the first time in more than six years that two strike groups were in the South China Sea simultaneously.

Deployment of the strike forces came on the heels of an announcement that the United States explicitly rejected China’s territorial claims there. Washington had never accepted those claims, but an outright rejection constituted a significant escalation of diplomatic hostility. Secretary of State Mike Pompeo added fuel to the fire by stating that the United States would provide active diplomatic backing to Southeast Asian nations who had competing claims with those of China.

During the Trump years, Washington also has strengthened its political links and established new security ties with Taiwan. One key measure was the passage of the Taiwan Travel Act in 2018, which not only authorized but encouraged high-level U.S. defense and foreign policy officials to interact with their Taiwanese counterparts. That move was a dramatic change from the policy adopted when the United States shifted diplomatic relations from the Republic of China (Taiwan) to the PRC in 1979. US policy thereafter had confined all contacts to low-level officials only. More recent congressional measures emphasize that the United States is firmly in Taiwan’s camp.

Washington has backed up those diplomatic gestures with tangible support measures. Not only did the Trump administration approve a $2 billion arms sale to Taiwan in July 2019, administration officials indicated that such sales were now “routine,” the “new normal” in US security relations with Taipei. That certainly seems to be the case. On May 21, 2020, the Trump administration informed Congress that it planned to approve a new arms deal to sell Taipei 18 advanced technology torpedoes. Such weapons would be especially deadly if Beijing attempted a naval assault on Taiwan.

Washington is explicitly using its own forces to emphasize support for Taipei. On June 11, a US military aircraft used Taiwan’s airspace, with Taipei’s explicit authorization, to fly from Okinawa to a destination in Southeast Asia. A week earlier, a guided ​missile destroyer, the USS Russell, ostentatiously sailed through the Taiwan Strait despite Beijing’s objections. It was the second American warship to transit the Strait in less than three weeks.

All of these developments are signs that Washington is embracing a containment policy directed against the PRC, and speculation grows about the emergence of a cold war between the two countries. Tensions have not quite reached cold war levels yet, but mutual suspicions and unfriendly acts are on the rise. The Trump administration is taking steps to implement a “decoupling” process to reduce America’s dependence on a variety of Chinese exports that have military applications or could expose the United States to PRC blackmail, if Beijing suddenly terminated those exports. Reducing America’s dependence on semiconductors and essential pharmaceuticals is a top priority. Decoupling would be an important prerequisite if US leaders adopted a full-blown containment policy toward Beijing.

Washington is seeking backing from both its European and East Asian allies for a more hardline policy regarding China. The Trump administration exerted pressure for a strong, united response to Beijing’s imposition of a new national security law on Hong Kong. US officials wanted a joint statement condemning that measure and an agreement from the allies to impose some economic sanctions. However, the European Union collectively, and its leading members individually, flatly refused Washington’s request. With the exception of Australia, the reaction of the East Asian allies was no better. Japan declined to join the United States, Britain, Australia, and Canada in issuing a statement condemning the PRC’s actions in Hong Kong. South Korea seemed even more determined than Japan to avoid taking sides on the Hong Kong issue.

Given the dearth of even diplomatic support from the allies for Washington’s Hong Kong proposal, there is even less chance that those countries will back a military containment policy against the PRC. If US leaders intend to maintain US strategic primacy in East Asia, they may find that it largely a unilateral mission. Backing from the European allies is a forlorn hope. Those governments see no benefit to their countries by getting into the middle of a US-China spat, and that view accurately reflects public opinion in their countries. The principal allies in East Asia might back the United States to some extent, especially if Beijing’s regional behavior becomes more abrasive and menacing. However, substantive support even from those nations is uncertain.

Nevertheless, US leaders – from both sides of the aisle – appear determined to maintain America’s status as East Asia’s hegemonic power. The inclusion of the Pacific Deterrence Initiative in the new National Defense Authorization Act reflects that goal. Key sponsors Sen. Jim Inhofe (R-OK) and Sen. Jack Reed (D-RI) were candid about China being the primary target. Although the PDI briefly mentions Russia and North Korea as possible challengers, Inhofe and Reed emphasize that the measure will “focus resources on key military capabilities to deter China. The initiative will also reassure US allies and partners, and send a strong signal to the Chinese Communist Party that the American people are committed to defending US interests in the Indo-Pacific.” They add that this “is not a partisan issue.”  Indeed it is not, and such a bipartisan consensus indicates that U.S. policy in the Pacific still will be firmly committed to primacy if Joe Biden becomes the next president.

It is clear that Inhofe, Reed and other PDI supporters envision a major shift of weaponry and logistical capabilities to the Pacific theater. “Investments in theater missile defense, expeditionary airfield and port infrastructure, fuel and munitions storage, and other areas will be key to America’s future force posture in the Indo-Pacific […] [I]t doesn’t matter how many F-35s the military buys if very few are stationed in the region, their primary bases have little defense against Chinese missiles, they don’t have secondary airfields to operate from, they can’t access prepositioned stocks of fuel and munitions, or they can’t be repaired in theater and get back in the fight when it counts.”

The PDI is an explicit brief for trying to preserve US strategic primacy in East Asia no matter what the cost. It’s the reaction one might expect from a hegemonic power that feels increasingly beleaguered. But it’s an approach that will be extremely difficult for the United States to sustain over the long term.

Washington faces two daunting obstacles. One is highly uncertain allied support—even from the East Asian powers, much less the European countries – for a militarized anti-China policy. Most of those countries have too much at stake in maintaining decent relations with Beijing to sign-on to such a strategy. The other problem is simply one of geography. As China’s economic and military power continues to rise, it will be more and more difficult for the United States to prevail in a confrontation thousands of miles away from the American homeland but in Beijing’s immediate neighborhood. US leaders are betting everything that their attempt at deterrence will remain credible in spite of such weaknesses. If deterrence fails, however, not only will Washington find itself in the midst of a horridly destructive war with China, but a war the United States may lose.