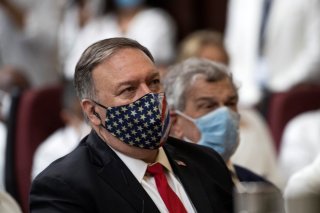 Rockets slammed into Baghdad International Airport and a U.S. base in Syria on Tuesday afternoon as State Department official Brian Hook claimed that Iran has been deterred by U.S. military pressure.

The rocket attacks are part of a series of violent incidents involving U.S. forces and Iranian-backed militants in Iraq and Syria over the past week. But the Trump administration insists that its own maximum pressure campaign has kept Iranian attacks at bay.

“We have restored deterrence,” said Hook, who oversees Iranian affairs at the State Department, at a Tuesday video conference hosted by United Against Nuclear Iran. "We enhanced our force posture in the region, and the President flowed another fifteen thousand troops when Iran started to advance its kinetic activity.”

About two hours after Hook concluded his speech, the Iraqi military’s press office confirmed in a statement that a “Katyusha missile” had slammed into the “vicinity” of Iraq’s main airport.

Col. Myles Caggins, spokesperson for the U.S.-led military coalition in Iraq and Syria, said that no Coalition forces were harmed in the attack.

A previous rocket attack on Friday had specifically targeted the U.S. headquarters at Baghdad International Airport, according to the Iraqi military’s press office.

No one claimed responsibility for the attacks, but Iranian-backed militias have been behind such incidents in the past.

A few hours later, another Katyusha rocket was fired at a U.S. base in Syria, the Coalition told Kurdistan24 News.

The day before, a U.S. patrol in Syria had been caught in a firefight with regime loyalist fighters. (The Syrian regime is backed by Iran.) Syrian state media reported that one soldier was killed in a U.S. airstrike, although Caggins denied that any airstrike took place.

Similar incidents had brought the United States and Iran to the brink of war in January 2020.

A rocket attack killed an American translator in December 2019, kicking off clashes between U.S. forces and Iranian-backed militias in Iraq.

Trump ordered the U.S. military to kill Iranian spymaster Maj. Gen. Qassim Suleimani in a show of strength on January 3. Iran responded with a ballistic missile barrage against a U.S. airbase that wounded over one hundred U.S. troops.

It was the first direct military confrontation between the United States and Iran since the Tanker War in the 1980s.

Secretary of State Mike Pompeo claimed at the time that the killing of Suleimani was part of the “military component” of the “maximum pressure” campaign against Iran.

Hook said on Tuesday that “putting in place the credible threat of military force to defend our interests” was part of the pressure campaign—and that the killing of Suleimani had been part of a strategy to restore deterrence against Iran.

“Our pressure and isolation and defending ourselves has been very successful,” he said. “This policy that we have in place needs to continue.”

Hook will be leaving the State Department next week.

Kurdistan24 reported a second rocket attack, this one in Syria, after this article was published. The article has been updated to reflect the updated information.