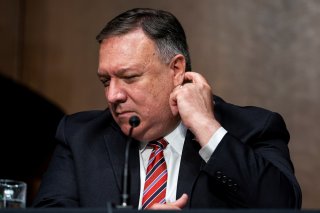 The Turkish-backed rebel government in Syria is not holding war criminals “accountable,” the U.S. State Department claimed in a new watchdog report.

Turkey has handed over large territories to a rebel coalition called the “Syrian Interim Government,” which considers itself the government-in-exile of Syria, as part of a military campaign against Kurdish-led forces.

Some of these rebel groups have been accused of war crimes, including the grisly murder of Syrian Kurdish politician Hevrin Khalaf and the mass kidnapping of Syrian women. And their political arm may be letting them get away with it, according to a Tuesday report on the Syrian Civil War by a U.S. government watchdog.

The State Department had told investigators with the Lead Inspector General in March 2020 that “the Syrian Interim Government has tried, convicted, and sentenced perpetrators” of war crimes.

But the department changed its tune in June 2020, telling the same investigators that it has “no evidence that the Syrian Interim Government has consistently arrested, prosecuted, or otherwise held accountable any [Turkish-backed Syrian opposition] members implicated in human rights abuses or violations of the law of armed conflict.”

The Syrian Interim Government has so far only imprisoned a single 19 year old fighter, according to the Lead Inspector General report.

State Department officials also told investigators that they were “concerned” with reports of human rights abuses in Afrin, a Kurdish-majority enclave that has been occupied by Turkish forces since 2018.

The officials mentioned that Syrian rebel groups in Afrin have been accused of looting homes and archaeological sites, destroying Yezidi religious shrines, and kidnapping women for ransom.

At least 161 women have disappeared in Afrin since the Turkish occupation began, including 44 who were reported kidnapped this year, according to data collected by the Missing Afrin Women Project.

Six of them belonged to the Yezidi religious minority.

A report by Professor Amy Austin Holmes at the Wilson Center also found that it is now “virtually impossible for Yezidis to openly practice their faith” in Afrin, where more than half of the Yezidi shrines have been destroyed or desecrated.

The State Department stated that “as we do not have a presence on the ground, we are not in the position to confirm these reports but many appear to be credible.”

These groups have alienated Syrian Arabs, and “likely limited Turkey’s ability” to turn Arabs against Kurds, according to the Lead Inspector General report.

It remains to seen whether the U.S. government will significantly push back on Turkey and Turkish-backed rebel groups.

State Department officials “raised the issue [of war crimes] with officials at high levels of the Turkish government,” according to the Tuesday report, and Turkish officials responded that they are taking the issue “seriously.”

“The United States has not sanctioned any” Turkish-backed Syrian opposition groups, investigators added, but U.S. law “provides authority to do so if certain criteria are met.”