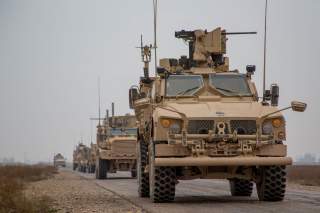 According to senior U.S. officials the United States “is considering a total withdrawal of U.S. forces from Syria.” President Trump seemed to corroborate that announcement when he tweeted, “We have defeated ISIS in Syria, my only reason for being there during the Trump Presidency.” If the president does indeed order the withdrawal of the 2,000 U.S. troops in Syria, his actions would result in a clear reduction of strategic risk to the United States and improve our security.

It remains to be seen, however, whether Trump makes good on this plan. There are others in government and military circles that do not want to leave Syria. Trump’s instinct to redeploy all military personnel from Syria, however, is solid and it’s not the first time he has publicly said so.

At a rally in Ohio in March of this year, Trump told a cheering audience, “We’re knocking the hell out of ISIS. We’ll be coming out of Syria like very soon. Let the other people take care of it now.”

Yet barely one month later, Secretary of Defense James Mattis seemed to contradict the president by stating, “We do not want to simply pull out before the diplomats have won the peace. You win the fight—and then you win the peace.” No troops left Syria and the matter dropped off the public radar.

Lt. Gen. Kenneth F. McKenzie, at his confirmation hearing earlier this month to become the new commander of Central Command, was asked about U.S. strategy in Syria by Senator Jeanne Shaheen. In response, McKenzie said, “The enduring defeat of ISIS is not going to be the absence of ISIS. ISIS, if defeated in the lower Euphrates river valley, is going to transition into an insurgency.”

That insurgency, the general continued, would continue to conduct attacks “in the region and really globally.” McKenzie suggested the U.S. military mission in Syria would continue until, he as he put it, “those attacks typically would be of an intensity and scope where they’d be able to be contained by local forces that would not necessarily require our assistance.” As we’ve seen after fifteen years in Iraq and seventeen years in Afghanistan, however, that “goal” will never be reached and the U.S. mission never ended.

The president needs to override the Washington interventionists on this matter, because the overwhelming weight of evidence is on his side. For instance, there is no threat to America’s security that justifies the deployment of lethal military power, but there is a great strategic risk for our country because of the still-burning civil war there. Moreover, and just as important, U.S. intervention has never been authorized by Congress.

It’s important to note that the troops in Syria were originally sent there by the Obama Administration to help the Kurdish-led Syrian Democratic Forces drive ISIS from their so-called “capital” of Raqqa.

That mission was successfully completed in October 2017. By all rights, the troops should then have been redeployed. Instead of bringing the troops home, however, officials seemed to go in search of something new for the troops to do. It was a mistake to leave our servicemembers in Syria to engage in combat operations when no threat to our country existed, as the risk to their lives and U.S. interests have only increased since that time.

In February, U.S. troops engaged Russian mercenaries in a large scale battle, killing over 200 of them. The matter did not escalate, but tensions remain as American and Russian-backed Syrian troops continue to operate close to one another. Our NATO ally Turkey, meanwhile, considers the SDF to be an extension of a terror organization operating in their country, and even today threatens to launch an attack against them, warning Washington that Americans could be killed in the process.

None of these risks benefit the United States. There is no threat to American security at risk in Syria. Yet the troops continue to operate on the territory of a sovereign country, daily risking their lives, without Congressional authorization.

President Trump is right to say our troops should withdraw from Syria. It is time he overrides the opinions of the Washington swamp and acts in the best interests of our men and women in uniform and places the interests of our country first.