Syria’s Kurds: We Were Cut Out Of the Syrian Peace Negotiations 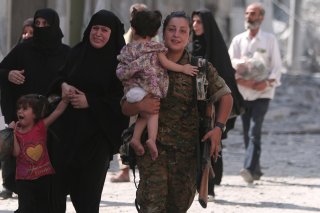 The U.S.-backed, Kurdish-led forces in northeast Syria say that they have been excluded from next week’s scheduled peace talks aimed at creating a post-war Syrian constitution.

U.S. diplomats say that their goal is to end the Syrian Civil War through a United Nations-backed peace process, including a constitutional convention set to meet in Switzerland next week. But the Kurdish-led Syrian Democratic Forces—the only major Syrian faction backed by the U.S. military—does not have a seat at the table.

“We have received no information from key, relevant stakeholders in the international community about our participation in the upcoming Constitutional Committee,” Syrian Kurdish diplomat Sinam Mohamad told the National Interest through a spokesperson. “This has been a real disappointment to us.”

U.S. policy is currently to push for an end to the Syrian Civil War through UN-supervised elections that would eventually establish “credible, inclusive and non-sectarian governance.”

The Kurds and their allies feel excluded from the current UN-led process.

“We represent an important constituency in Syria and we should have a voice in the country's future,” Mohamad said.

One third of the Constitutional Committee is appointed by Syrian ruler Bashar al-Assad, one third by the United Nations, and one third by a coalition of Syrian opposition groups.

This coalition does not include the Syrian Democratic Forces.

“The issue of how the people of northeast Syria are represented comes up from time to time,” Amb. James Jeffrey, the State Department official in charge of Syrian affairs, told reporters on Monday. “Syrian opposition elements of various sorts are discussing that issue right now, including with people representing the political and governmental forces in the northeast.”

Jeffrey and his deputy, Special Envoy Joel Rayburn, will meet with delegates in Switzerland next week.

Mohamad confirmed that there had been talks between the United Nations and “a number of civil society organizations based in [Northeast] Syria” about the peace process, but claimed that these efforts “did not bear fruit as far as the [Syrian Democratic Council] is concerned.”

The Trump administration has urged the Kurdish-led and Turkish-backed rebel groups to put up a united front against Assad, but the two factions have gone to war repeatedly.

Jeffrey plans to meet with Turkish officials and Syrian opposition figures in Turkey to discuss the “maximum economic and political pressure campaign to hold the Assad regime accountable” after his travel to Switzerland, according to the State Department.

The regime has also dragged its feet in participating in the UN-led peace process. The Constitutional Committee meeting is the first discussion between the government and the opposition to take place since talks broke down in November 2019.

Assad said that he was open to “discussing” the Syrian constitution in a speech last week, where he denounced “attempts to topple the nation,” political initiatives “aimed at luring us into traps” and “the meddling of the U.S. and its agent, Turkey.”

But the Trump administration is confident that its diplomatic and economic pressure can force the Syrian government to make concessions.

“We noticed last week in a speech by the Syrian dictator, Assad, that he did talk at some length about the political process in a way that we haven’t seen often before,” Jeffrey said. “So that may be a good sign as well. We’ll just have to wait and see.”

This article has been updated to reflect Amb. Jeffrey's travel schedule, released by the State Department on Friday morning.