Take the Oil? Pull the Troops? What Is Donald Trump Doing in Syria? 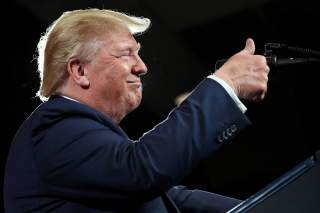 What exactly is the United States doing in Syria?  The answer depends on who you ask.

To Chairman of the Joint Chiefs Mark Milley and the rest of the military brass, the U.S. objective is the same as it ever was: “the enduring defeat of ISIS.” Speaking on ABC’s This Week, Milley placed the number of U.S. troops in Syria somewhere between 500 to 600, but most certainly less than 1,000. President Trump’s decision to park hundreds of troops next to Syria’s eastern oil fields is presumably just an extension of the original mission. Nothing to see here folks: we are pressing on.

Ask Defense Secretary Mark Esper the same question, however, and you will get a different answer. In Esper’s telling, preventing the Islamic State from retaking the oil fields is only one goal on a longer list, to include ensuring the Syrian Kurds receive all of the profits and blocking the Assad regime and the Russians from accessing the area. About 250 miles to the south, a couple of hundred U.S. soldiers stationed at al-Tanf along the Iraq-Syria border are executing what is an altogether different mission entirely: disrupting Iran’s attempt to establish an uninterrupted supply route from Iraq through Syria to Lebanon.

Washington’s Syria venture is a discombobulated mess, with the confusion of the policy itself rivaled only by the haphazard, fly-by-the-seat-of-your-pants process the Trump administration used to make it. You have to empathize with the American servicemember decked out in protective gear in the middle of the Syrian desert, sitting in his humvee, waiting for a clear set of orders and procedures from the policymakers back home.

All of which yet again begs the question: what the hell are U.S. troops still doing in Syria? What objectives are guiding the strategy? Is there even a strategy? And if so, what metrics should the American people use to determine whether the strategy is succeeding or failing?

The fact we don’t know the answers with any certitude one way or the other is deeply troubling. The Trump administration’s messaging has been all over the place, so much so that it often feels as if the White House is throwing spaghetti at the wall to see what sticks. At the same time, Trump is screaming to his supporters about Uncle Sam grabbing the spoils, his advisers are skating on thin-ice and offering all sorts of reasons for why the U.S. needs to retain an indefinite military presence in a country that the president himself has frequently described as “sand and death.” The American people are being led to believe that the introduction of Bradley fighting vehicles and other types of heavy armor into Syria is all part of the plan to hold off the Islamic State, conveniently ignoring the fact that the Syrian Kurds were more than capable of defending and administering the oil wells on their own.

The White House may not want to admit it openly, but the truth is that Washington has never really given up on its dream of replacing Bashar al-Assad’s brutal, family-based dictatorship with a starry-eyed, pro-Western democratic alternative. Accomplishing that dream came crashing down when the armed Syrian opposition quickly proved itself to be a collection of divisive and faction-prone amateurs with questionable allegiances. But the dream of ousting the strongman nevertheless lives on to this very day.

It’s obvious to everyone who has monitored the Syria conflict for the last eight years that the Assad regime is in desperate financial distress. Damascus may be on course to winning the war over its armed opponents in the most inhumane way possible, but it’s not even close to winning the peace.

The war has completely transformed Syria from a once-proud Arab nation into a political, economic, and demographic basketcase. According to the World Bank, Syria lost an average of 12% growth to its GDP every year between 2011-2018, with total losses amounting to $300 billion. The millions of refugees and internally displaced, roughly half of Syria’s population, will be lucky if they find temporary work in the labor market. Schools will need to be rebuilt, hospitals and clinics will need to be put back into service, and room will need to be made in the workforce for a generation of Syrian youth who have known nothing but conflict. On top of a reconstruction tab that could be as high as $400 billion, Bashar al-Assad and his partners are starting at a depressing future. The dictator needs money to pacify, consolidate. and rebuild, and he knows he is unlikely to get much help from Russia and Iran over the long-term—two countries that have their own economic problems to deal with.

With the eastern oil fields locked down, Assad will be totally dependent upon Russian cash and Iranian loans to bail him out. If that assistance is not forthcoming, Damascus will have no choice but to batten down the hatches in the hope it can ride out the coming decade of economic despair.

Let’s be clear about what is really going on: the U.S. redeployment to Deir ez-Zor has less to do with mopping up ISIS remnants and more to do with making Syria’s reconstruction and rehabilitation as prolonged and difficult as possible.  The White House is essentially ordering U.S. soldiers into a highly risky and combustible environment in order to screw with a dictator it failed to depose.  All of this is occurring without even the slightest murmurings of a national debate on Capitol Hill, let alone authorization from Congress or a serious, in-depth inter-agency process.

In Syria, we have the worst of all worlds: a half-baked strategy wrapped around a series of amorphous policy objectives, dressed over with an embarrassing display of staff work and sold to the American people as a continuation of the fight against ISIS.

The Trump administration is putting the shiniest lipstick on the pig that is Washington’s Syria policy and hoping we don’t notice the mission creep proceeding right in front of us.  And it’s an open question as to whether the American people are buying it.