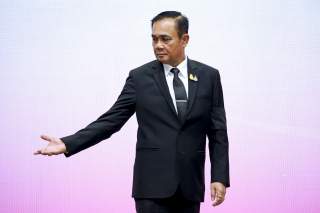 Also after the poll the election panel disqualified a number of candidates and changed the rules on apportioning votes to party lists, stealing away numerous members from opposition parties. With scores of election complaints filed, the commission may disqualify additional opposition candidates and order new votes. “They have a whole year to disqualify people, so the number can be changed the whole time,” Explained Siripan Nogsuan Sawasdee of Chulalongkorn University. Even later the military’s minions can remove members of Parliament for violating “ethical standards,” which translates to “anything.” Years ago a Thaksin-supported prime minister was so ousted for hosting a TV cooking show.

The 250 senate members, lackies appointed by the junta—including Prayuth’s younger brother—joined with junta supporters to choose the generalissimo as prime minister. Among his parliamentary supporters was the much reduced (and misnamed) Democrat Party, which before the coup gave up on democracy and refused to even contest the last free election, having lost five straight polls to Thaksin’s forces. Now it formally backs dictatorship.

Optimists argue that the military now is somewhat constrained and will have to share power, since it must seek the support of elected parliamentarians to maintain a majority necessary to form a government. However, army commander-in-chief Apirat Kongsompong warned against criticism of “Thai-style democracy,” meaning continued military rule. The fate of Thanathorn, who campaigned to cut military personnel and spending, will be on the minds of anyone inclined to challenge the junta. The regime has a range of coercive tools to ensure that it can amass whatever support is necessary. The ability to ban parties, oust candidates, and jail opponents ensures the absence of real democracy. Any opponent of the junta can be eliminated at will.

It would have been easier for the junta to simply keep the status quo, but the military apparently desired international respectability, hence the lavish but meaningless democratic Kabuki theater. Military dictatorship will live on, with Generalissimo Prayuth continuing as prime minister. Which makes more repression inevitable, since the thin-skinned autocrat does not know how to rule otherwise. Neither civilian politicians nor Thai voters will threaten his power. The only challenge might be posed by other military factions, which are less enamored of generalissimo, who has lost direct control over the army with his political role. The possibility of an intra-military coup already is being whispered about Bangkok.

Although neither the United States nor Europe can force the junta from power, both should avoid taking any actions that legitimize what remains arbitrary undemocratic rule. Washington should retain restrictions on arms sales and other military cooperation, for instance.

After President Donald Trump’s election then-U.S. Ambassador Glyn Davies spoke of the need for reconciliation, since the Obama administration had distanced itself from the junta, which in turn warmed relations with China. Davies expressed Washington’s desire to “continue to evolve the relationship, to grow the relationship, to deepen it.” However, the United States should not allow itself to be held hostage by an inconstant, unstable, and vain dictator. America cannot rest its security upon such a dubious partner.

Business, too, should avoid ennobling a repressive regime. Last October Forbes, a name long associated with journalistic and economic liberty in America, highlighted the generalissimo as a keynote speaker at its Global CEO Conference in Bangkok. The wooden Prayuth is not known for his prescience or eloquence, though a rendition of a happiness song might have been worth the price of attendance. In any case, whatever prestige and financial support Forbes gained from his attendance was dearly bought by the publication’s association with repression and autocracy.

Thailand offers yet another example, as if one was needed, that elections are not enough for democracy. After finding the Thai people insufficiently appreciative of the last round of military rule, Generalissimo Prayuth ensured that he retained control. Friends of freedom should treat him like the destructive dictator that he remains.