Time for President Donald Trump to Bury the U.S.-Turkey Alliance 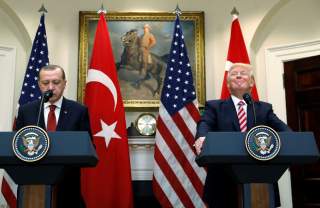 The U.S.-Turkey alliance is dead. Certainly, as long as Tayyip Recep Erdoğan is Turkey’s president. And probably well beyond that. The current dispute over the imprisonment of evangelical pastor Andrew Brunson dominates the news. But more important is an increasing divergence in the two nations’ geopolitical interests.

The traditional claim that Ankara was a “vital” partner long reflected the triumph of hope over experience. During World War II Ankara learned from its previous mistake and avoided joining the losing side. Then Turkey enlisted with the Western allies against the Soviet Union.

However, Washington’s enthusiastic endorsement of Ankara’s value reflected the expectation that the Turkish military always would be able to impose its will. For instance, after the Turkish parliament refused in 2003 to permit Washington to open a second front against Iraq from the north, George W. Bush’s Deputy Secretary of Defense, Paul Wolfowitz, urged the Turkish armed services to make their views known to their nominal superiors, the civilians. But the time when the military could impose its will—even remove and execute an elected prime minister, as it did in 1961—was over.

Nevertheless, the United States saw the traditional Kemalist state, courtesy Mustafa Kemal Ataturk, as Washington’s ideal, secular, pro-American democracy. In reality, however, the military’s repeated intrusions into politics, backed by multiple authoritarian restrictions even in the best of times, meant that Turkey fell far short of a constitutional republic.

Moreover, the government was secular and pro-American only so long as it was undemocratic. Many of its people were religious, seriously so, but were restricted from living their faith in public. Polls showed Turks to be among the world's most hostile to America. Earlier governments kept both impulses in check. Erdoğan was careful and cautious leading up to his first election victory in 2002 and the gradual consolidation of his power over the military. In time, however, he not only loosed these passions, but he also inflamed and used them to win electoral victories.

In dealing with other nations, Washington often has overlooked a lack of shared values or accepted a lack of common interests. However, Erdoğan's Turkey increasingly lacks both. Which helps explain the dramatically worsening crisis in relations sparked by Ankara's detention of some fifteen Americans, most notably Brunson, on dubious terrorism charges growing out of the coup attempt two years ago. Meanwhile, thousands of Turks have been arrested based on even less.

Having taken the dispute public, the Trump administration made a civil resolution virtually impossible. The mutual exchanges of sanctions and tariffs committed both nations' prestige. (Besides, turning tariffs into a political weapon could further undermine the cause of free trade, but that obviously is of no concern to President Trump.)

Turkey is more vulnerable economically because of its government’s myopic policies, which provided a politically advantageous short-term boost, but the Turkish people are more determined politically. Stated a typically-bombastic Erdoğan: “Those who believe they can make us kneel by economic manipulation, have never understood this nation at all.” In contrast, most Americans know little of, and care even less about, the controversy.

At this stage, neither side can afford to back down. One suggestion is a compassionate release because Brunson supposedly is suffering from mental health issues as a result of his imprisonment; this solution would have been easier earlier on. Resolution almost certainly will require some hostage trade, since the Erdoğan government wants to spring from U.S. prison a banker and Erdoğan confidante, Hakan Atilla, convicted of violating sanctions against Iran.

In contrast, the “pastor for pastor” swap shamelessly suggested by Erdoğan, involving the U.S.-based Muslim cleric Fethullah Gulen, who Erdoğan improbably accuses of orchestrating the 2016 attempted coup, is a non-starter. Extradition requires sufficient evidence of guilt—which Ankara has not provided in more than two years—and judicial approval. Even Brunson’s release would leave more than a dozen other Americans, including NASA scientist Serkan Golge, languishing in Turkish custody. Their treatment, too, is “not fair, not right,” as President Trump denounced Brunson’s arrest.

Whatever the outcome, the dispute will create enduring antagonisms. Even American success in brow-beating the Turks would end up as a failure, making future relations more difficult. The resentment would be long-lived, as Ankara essentially said, "never again." And American visitors and residents would be left wondering if they are to be the latest foreigners effectively kidnapped to serve Turkey's international objectives.

Instead of attempting to paper over rapidly widening fissures in the relationship, Washington should end the illusion that there is anything special about it to save. There is no need to be adversaries. However, the Trump administration should proceed on the assumption that the two nations have lost any claim of shared liberal aims and will end up on the opposite side of many geopolitical questions critical to the United States. So long as Erdoğan is president, at least, America will be one of his "go-to" scapegoats, along with assorted financial, foreign, and Zionist boogeymen.

Washington should take a new approach to Turkey. First is to recognize that the United States is the superpower, not the supplicant. America looms much larger in Turkish affairs than Turkey does for U.S. policy. Turkey enjoys a splendid geographical position, but that principally advances dubious American offensive operations rather than defensive measures.

Geopolitically, Turkey's shift to a neutralist/adversarial stance is inconvenient, not devastating. Vladimir Putin's Russia is no replacement for the Soviet Union. Despite allied fear-mongering, Moscow does not threaten Europe with war and is in no position to dominate the Middle East, with or without Ankara's aid. Turkey remains tied to Europe and is playing a useful balancing role in the Mideast, opposing both Iran and Saudi Arabia at times. Where Turkey's policies are most contrary to Washington's—hostility toward Israel, attacks on Syria Kurds, tolerance of Islamic State cross-border activities and trade, cooperation with and weapons purchases from Moscow—the Erdoğan government is following what it believes to be its fundamental interests.

It, of course, would be better for America if Ankara adopted Washington’s objectives. However, wishing Turkey to be a “strategic partner” won’t make it one. Chasing after the Erdoğan government gives it more leverage than it deserves. And offering to pay it to be one is a fool’s errand, likely to be far more costly than benefits received. In his New York Times op-ed, Erdoğan threatened to “start looking for new friends and allies.” Let him. In fact, he already has.

Matthew Bryza of the Atlantic Council warned that “Abandoning Turkey now would weaken the North Atlantic Treaty Organization (NATO), forfeit U.S. influence in the Middle East and threaten the coalition whose fight against ISIS is far from finished.” Yet all three of these are occurring today, even as Washington continues to pursue the bilateral relationship amid Turkish misbehavior.

Second, America should raise the issue of Ankara's membership in NATO. Turkey's numerous violations of democratic and human rights norms would make it ineligible for membership today. Nor does Ankara play much of a security role, since it is unlikely to join a fight against Russia, with which it has forged an increasingly close relationship.

In fact, as a member of the alliance, Turkey seems likely to play an increasingly malign role. Ankara's objectives diverge ever more from those of the West and Erdoğan replaced alliance-friendly officers in the aftermath of the coup attempt. Turkey is more likely to use NATO to obstruct than advance Western interests in the future. Ankara is unlikely to leave unless pushed.

Third, Washington should withdraw non-essential weapons and personnel from the country, principally at the Incirlik airbase. The nuclear weapons stationed there are vulnerable and should be brought home. Washington should reduce Americans' profile in Turkey and prepare for a time when the United States is forced to yield the facility. That might even be a positive for America since the very ease of intervening militarily out of the Incirlik airbase appears to encourage Washington to meddle nearby when no vital or important interests are at stake.