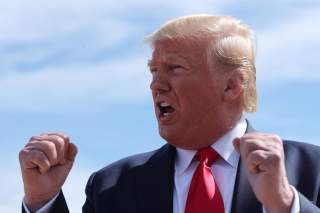 Like all presidential candidates, Donald Trump made a boatload of promises when he was running for the nation’s top job in 2016.  He was the overly blunt, prickly, obnoxious non-politician who was going to turn the United States around with lower taxes, more jobs, a booming economy, fewer federal regulations, and a complete overhaul of the country’s broken immigration system.

Trump’s most significant commitment during the campaign, however, was pulling the United States out of the unending, costly wars that have dominated U.S. foreign policy for nearly 20 years. In the typical, coarse language he was known for throughout his four decades in the Manhattan real estate business, Trump blasted the war in Iraq as a “big, fat mistake” and called out Republican candidates on the debate stage (like Jeb Bush) who were unwilling to admit it. He condemned the stupidity of U.S. leaders for continuing to throw tens of billions of dollars into Afghanistan, declaring as far back as 2012 that it was time for U.S. troops to get out. Trump has continued with the theme in his first term as president: Iraq was a disaster; Afghanistan was a tragic waste of lives of resources; Syria was a land of “sand and death”; and the nation-building campaigns in the Middle East were a sad joke.

To the majority of Americans, including the very veterans who were ordered to prosecute these military campaigns, the president’s rhetoric was a breath of fresh air. Whether you love him or hate him, there was some truth in Trump’s interpretation of events.  As the Pew Research Center reported this July, 64% of veterans and 62% of the general population don’t believe the war in Iraq was worth fighting. Solid majorities in both groupings have the same belief about the war in Afghanistan, which is already the longest conflict in American history, sucking up nearly a trillion dollars in taxpayer money and tens of thousands of American casualties over a period of 18 years. The American people are sick and tired of seeing their sons, daughters, brothers, and sisters in uniform being deployed on missions that never seem to end in the pursuit of rosy objectives that on its best days are about as likely to be achieved as fixing the New York City subway system.

Unfortunately, Trump’s rhetoric doesn’t match reality. While he remains eager to campaign on downsizing U.S. investment in overseas entanglements and lessening the burden on Washington’s shoulders, the wars—and America's involvement in them—continue like the hamster wheel that keeps on going and going and going. It’s as if all of these military campaigns are on auto-pilot: regardless of how expensive and pointless they are, it’s simply more convenient for policymakers in the Beltway to preserve a bankrupted status-quo.

Regrettably, Trump is at risk of becoming a member of the foreign policy establishment he so strongly despises.  As Quincy Institute President Andrew Bacevich writes in the Los Angeles Times, Trump’s repugnance of the foreign policy status-quo “doesn’t extend much beyond making noise.  Even his troop withdrawals result in little more than repositioning.”

Indeed. Syria is a case in point. In December 2018, Trump broadcast to the world that U.S. troops were packing up and going home after a 4-year military operation against the Islamic State.  It took less than an hour for most of Capitol Hill, former national security officials, think tank analysts, and the Washington Post editorial board to charge the White House gates in rabid fury.  Defense Secretary Jim Mattis and the administration’s own counter-ISIS envoy, Brett McGurk, resigned in protest.  Lindsey Graham, always happy to see himself on television, jumped on the airwaves and tried to shame Trump into reversing his decision.  And, sure enough, the pressure campaign suceeded.

The American people were given an extreme case of deja-vu over the last three weeks. Yet again, Trump announced that U.S. troops would be moving on. And yet again, the wolves showed their teeth. Graham and Gen. (Ret) Jack Keane rushed to the White House, maps in hand, to argue that leaving Syria’s oil fields to the Iranians and the Russians was like handing the keys of the region over to America’s enemies (a silly proposition if there ever was one). The steady drumbeat of criticism on TV, the editorial pages, and social media proved to be too much for Trump to resist. As this piece is being written, U.S. armor has crossed the Iraq-Syria border en route to the oil fields in Deir ez-Zor, preparing for a mission that was neither authorized by Congress or thought through in the inter-agency. By the looks of it, we could be looking at a situation where there are more U.S. troops on the ground in Syria after Trump’s fake withdrawal than there were before he made the announcement.

Meanwhile, the war in Afghanistan goes on despite the president’s supposed revulsion about the conflict. 12,000 Americans remain in-country, essentially holding the line indefinitely in order to maintain a years-long stalemate between a vicious Taliban insurgency and an entitled Afghan government. By the Special Inspector General’s own count, more U.S. munitions were dropped this past September than any month since October 2010, when about 100,000 U.S. soldiers were risking their lives clearing villages, building schools, paving roads, and trying to help Afghan political leaders reform. Years later, many of those villages are now in Taliban hands and Afghan politicians remain more concerned with their self-enrichment than their constituents.

Needless to say, none of this is conducive to ending the endless wars looks like. If Trump were serious, he wouldn’t have authorized the deployment of 3,000 military personnel to Saudi Arabia since September, a country that has become increasingly erratic since Mohammed Bin Salman started consolidating the reins of power. He wouldn’t be sending U.S. soldiers on a fool’s errand in eastern Syria, protecting oil fields that amount to a small puddle of the region’s total oil supply. And he most certainly wouldn’t risk the life of one more American soldier in Afghanistan, a country that can only free itself from four consecutive decades of internal conflict if all Afghan stakeholders have an incentive to end it peacefully.

The phrase “end the forever wars” is now vulnerable to becoming one more campaign slogan without much substance. For the majority of the American people desperately in search of a smarter, shrewder, more restrained foreign policy, that would be a shame.

Image: U.S. President Donald Trump talks to reporters about Turkey's agreement to a ceasefire in Syria as he arrives in Fort Worth, Texas, U.S., October 17, 2019. REUTERS/Jonathan Ernst.