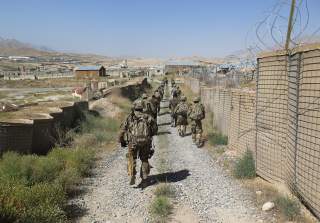 WASHINGTON—The president wants to end the war in Afghanistan.

Since entering office thirty months ago, Donald Trump has looked for ways to exit America’s longest conflict, but has been stymied, repeatedly, on execution.

The first major flashpoint came in summer 2017—when the president found himself effectively with two bad options—install former Blackwater chief Erik Prince as a viceroy for U.S interests and withdraw U.S. troops, a plan championed by then-White House Chief Strategist Steve Bannon, or assent to a moderate ramp-up, the plan favored by Trump’s troika of generals, H.R. McMaster, James Mattis and John Kelly. The president chose the latter course. The president explained the move in an announcement that some political observers chuckled looked like a “hostage tape.” All of the major players in that decision are now gone, however, as Donald Trump has repeatedly, frustratedly, reshuffled the deck in his inner sanctum.

The second major flashpoint in this drama came in December 2018, when Trump suddenly announced a pullout in Syria, and rumors swirled around Washington of a parallel drawdown in Afghanistan. Mattis resigned as Pentagon chief, dismissive of the maneuvers. But, as of summer 2019, Trump has failed to deliver a significant exit in either theater.

That could be about to change.

Last September, President Trump and Secretary of State Mike Pompeo tasked the veteran American diplomat Zalmay Khalilzad, the former UN ambassador and Afghan native, with reaching a peace deal. The watchword out of the war-torn country during the last few weeks is that Khalilzad is close, though the government in Kabul remains leery of the special envoy.

But meanwhile, bodies continue to pile up—with two U.S. servicemen killed in the country just last week. The clock is ticking, too, as the president enters full re-election mode. True to form: the Washington Post has reported that Trump is poised to “withdraw thousands of troops from Afghanistan in exchange for concessions from the Taliban, including a cease-fire and a renunciation of al-Qaeda.” Per the report, the number would be brought from around 14,000 to nearly 8,000.

Realist allies of the administration’s course are cautiously optimistic.

“A deal to reduce U.S. troop levels in Afghanistan by 5,000 to 6,000 in exchange for the Taliban’s renunciation of Al-Qaeda, a cease-fire, and an agreement to begin direct talks with the Afghan government is good news,” said Benjamin H. Friedman of Defense Priorities. But, he noted: “Some in Washington may then seek to stall progress toward a complete U.S. military withdrawal. That would be a mistake.”

“President Trump has correctly called for the United States to withdraw from Afghanistan,” said William Ruger, vice president for research and policy at the Charles Koch Institute. “Our national interests and the American people require that this is only one in a sequence of positive steps toward a speedy and full withdrawal of all U.S. troops rather than an endpoint that needlessly keeps our forces in harm’s way for years to come.” Ruger says that “We’ve accomplished what we needed to in Afghanistan, the decimation of Al Qaeda and the severe punishment of the Taliban. ... It is time for our troops to come home.”

But election optics cut both ways. A former senior administration official told me that the deepest fear is that the Taliban will exact brutal vengeance and the president’s opponents in the media will highlight the chaos. “Women teachers lined up in the streets?” he asked.

Douglas Macgregor, who as I’ve reported is a candidate to replace uber-hawk National Security Advisor John Bolton, said: “[President] Richard Nixon’s approval rating were never higher than when he announced our departure from Vietnam. … Leaving will be a huge win for POTUS and the country.”

But precautions appear to have been taken. A source familiar with the matter told me the Pentagon brass—which has slow-walked previous attempts at withdrawal—secured the top item on their wishlist, a stipulation that the United States can return with vigor if Al Qaeda resuscitates itself.

For now, there is even some talk of a U.S.-Taliban alliance against a more loathsome enemy, IS, the Islamic State group in Afghanistan, which has grown more fearsome in the country in recent years. The fear is if the Taliban works too closely with the Americans, hardliners will bolt to IS. However, it’s this kind of logic that has some administration allies fear a trap for continual redeployment. Absolutely a step in the right direction, a former White House official told me, but “still [nine thousand troops] seems wildly excessive.”

Many realists recommend institutionalizing a practice for dealing with Afghanistan how America deals with other dangerous regions of the world—lethal force, then bolt.

“The United States protects itself from terrorism through its ability to track and attack threats directly via missiles and raids, through willingness to use that capability, and its ability to deter groups like the Taliban from harboring anti-American terrorists,” Defense Priorities said.