Is Trump’s Iran Policy Meant to Start a War? 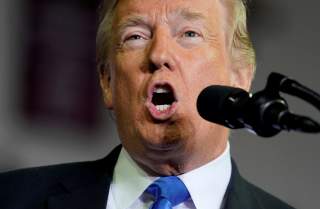 Much indicates that the likely murder of Saudi journalist Jamal Khashoggi will be transformative for Saudi-U.S. relations. But whether it will affect the one issue where Saudi pressure on the United States was the greatest—Iran—is unclear. The Iran strategy favored by Saudi Arabia and the Netanyahu government in Israel, and eagerly adopted by the White House, will likely lead to a military confrontation regardless of whether its assumptions about the status of Iran’s economy and political survivability are true or not.

The Trump administration’s pressure strategy on Iran assumes that the Islamic Republic is standing on its last leg. The White House believes a gentle nudge will cause its collapse in the next few months. This is a shaky assumption—one which makes the policy immensely risky for a simple reason: what if President Donald Trump and the Saudi Crown Prince are wrong? What if the Iranian theocracy survives, albeit far angrier and hostile than it was before? And what if the assumption is correct? Will the clerical rulers sit quietly as the United States, Saudi Arabia and Israel orchestrate their demise? History is riddled with examples where pressure has triggered confrontation rather than capitulation—even when the underlying assumption has been correct.

If Trump’s bet proves wrong and the theocracy in Tehran shows itself too resilient, the United States will find itself in a vulnerable position. Trump’s complete isolation at the UN General Assembly last month was nothing short of astounding—yet, that may become the new normal. In the process, the United States will incentivize other countries to develop alternative financial transaction systems in order to protect themselves from what increasingly will be viewed as illegal U.S. financial sanctions. This will likely weaken the dollar and diminish America’s ability to use the existing financial system as an instrument of its own national power.

Moreover, Iran will likely be far more hostile and determined to counter U.S. influence in the Middle East as a result of the Trump administration’s escalation of tensions and its efforts to unseat the theocracy in Tehran. Already, a senior Iranian official told us this past week, Trump’s pressure has undermined moderates in Tehran who advocate for diplomacy between Iran and the West and a reduction of tensions. On the other hand, hardliners in charge of Iran’s policies in Syria and Yemen have benefitted from Trump’s belligerence. “The sense is that engagement has not paid off for Iran [as a result of Trump’s sabotage of the Iran nuclear deal],” the Iranian official explained, “Iran’s military engagement in the region, however, has paid dividends to Iran’s security.”

But here’s the real problem with America’s all-out pressure approach: Even if Trump’s assumption is correct and the Iranian regime is close to collapse, history suggests it will not play out as neatly as the Trump team appears to believe. Rather than Iranian capitulation, Trump should be expecting confrontation. Which is exactly what the Saudis want.

There are many examples in which pressure policies led to uncontrollable escalation. In December 1941, the Japanese ambassador to the United States issued an ominous warning. If the United States continued its unbearable oil and gas embargo on Japan, then it would be “preferable [for Japan] to fight rather than to yield to pressure.” Five days later, Japan attacked Pearl Harbor, killing 2,403 Americans and triggering a direct confrontation between the United States and Japan in the Pacific Ocean. While many consider Pearl Harbor as a surprise attack, it did not come without a warning.

The parallels to the Iranian situation are clear. Newly declassified documents from the State Department establish that America’s allies in both Europe and the Middle East had warned the Clinton administration of the dangers of isolating Iran and imposing suffocating sanctions on the country. In a June 1995 cable from the U.S. embassy in Abu Dhabi to Washington, a UAE official is quoted as saying that “If Iran were pushed over the brink […] the aftermath could pose risks for the entire region.”

Similarly, the United States had been warned by its European allies that a policy of total isolation only would give aid to the most hardline elements in Iran. A cable from U.S. embassy in Paris to former Secretary of State Warren Christopher indicates that then French president Jacques Chirac had warned that “It would be very dangerous to isolate Iran totally […] experience proves that the U.S. embargo benefits only the extremists.”

If the Japanese experience is instructive and if Trump’s economic embargo brings the clerical regime near collapse, Tehran’s warnings about closing the Strait of Hormuz may no longer be empty rhetoric. Over the years, Iranian officials have repeatedly warned that if Iran cannot export its oil, they will halt other countries’ oil shipments from the Persian Gulf. But these warnings have been dismissed since such a move would also suffocate Iran’s own oil exports.

But if Iran is faced with a situation in which it cannot sell oil anyways, and passivity only will make the demise of the regime inevitable, then the risks grow that Tehran will follow in the footsteps of Imperial Japan. According to Hossein Alayi, a former commander of Islamic Revolutionary Guard Corps (IRGC), if Iran concludes that its survival is at stake, it may decide to avert a death by thousand cuts and take extraordinary measures to alter the situation. What under normal circumstances would be considered an irrational—perhaps even a suicidal—measure, will under the circumstances created by Trump’s policy become rational and perhaps Iran’s only option.

And therein lies the irony of Trump’s Saudi-inspired Iran policy: it is doomed to bring about confrontation whether Trump is wrong about Iran—and whether he is right.

Trita Parsi is author of Losing an Enemy—Obama, Iran and the Triumph of Diplomacy. Sina Azodi is a researcher at University of South Florida’s Center for Strategic and Diplomatic Studies.