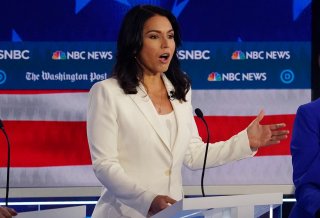 The Treasury is currently blocking over eight thousand individuals around the world from the U.S. economy, as part of thirty-five different sanctions programs, some of them dating back decades. And there are near-total U.S. economic blockades on North Korea, Cuba, Iran, Venezuela, and Syria.

But the U.S. government has never had to publicly measure the success of these sanctions—whether they actually pressure hostile governments without harming civilians.

That may change next year, if Rep. Tulsi Gabbard (D–Hawaii) has her way. The foreign policy maverick has successfully passed an amendment to the military budget in the House of Representatives forcing the President to collect and publicly report data on the impact of U.S. sanctions worldwide every year.

The amendment still has to pass the Senate, but if it makes it into the military budget, it will almost certainly become a part of U.S. law.

“Too often U.S. sanctions are levied against another country in the attempt to ‘punish’ that country’s leader without consideration of what the real impact of those sanctions are,” Gabbard said in a statement. “In reality, these sanctions are like a modern-day siege, most impacting the sanctioned country’s citizens, limiting their supply of food, water, medicine and basic supplies they need to survive, resulting in great sickness, suffering, and death.”

She added that “[t]here is currently no assessment or accountability for our country’s leaders” for the effects of sanctions.

The debate over whether sanctions work has heated up in recent months. But there is no authoritative source of data that either side can point to.

Gabbard’s amendment would change that.

It requires the President, State Department, Treasury, Commerce Department, U.S. Agency for International Development and U.S. Ambassador to the United Nations to issue an annual report on the effect of sanctions on foreign nations.

The report would have to include several different statistics about daily life—from mortality rates to environmental impacts—as well as an explanation of “whether the stated foreign policy goals of the sanctions are being met.”

Gabbard is not the first Democratic member of Congress to take aim at sanctions.

Rep. Joaquin Castro (D–Texas) recently complained that “the primary victims abroad are civilians whom we should be seeking to empower, not impoverish” in an essay announcing his run for House Foreign Affairs Committee chairman.

Earlier this year, Rep. Ilhan Omar (D–Minn.) had proposed a bill requiring Congress to approve of all new and existing sanctions within two months.

But the Gabbard amendment is the sanctions accountability measure that has come closest to becoming law. It passed the House without any Republican opposition—and even included some input from Republicans.

The provisions that require the President to report on whether sanctions are achieving their goals were added by Republicans on the House Foreign Affairs Committee, says Just Foreign Policy executive director Erik Sperling, who helped advise Gabbard’s office.

If the Republican-controlled Senate accepts the amendment, it will become a part of the military budget, which the President is all but guaranteed to sign.

The reports would add a new dimension to the growing debate about the impact of sanctions.

“The Gabbard provision would require transparency into the impacts of this practice and that would undoubtedly uncover information that would provide additional impetus for sanctions policy changes we’re seeking,” said Erica Fein, advocacy director at Win Without War, whose organization recently signed an open letter laying out progressive foreign policy priorities. “It’s not clear that Senate Republicans will support, but we’ll be supporting the provision as it moves into [House-Senate negotiations].”

Critics say that economic sanctions hit civilians harder than governments, bringing misery and death to the populations the economic campaigns are supposed to protect.

“We are aware of some of the dire impact of sanctions thanks to independent studies that have shown how disease, malnutrition and mortality rates increase significantly in countries targeted by sanctions,” said Alexander Main, director of international policy at the Center for Economic and Policy Research, in a statement released by Gabbard’s office, “but the U.S. government has never officially recognized this and other ‘collateral damage’ caused by sanctions.”

Supporters, on the other hand, say that the sanctions are a powerful tool to hold tyrants, terrorists, and hostile governments accountable without going to war.

“Hundreds of times in the past two years, we have isolated from the financial system those who commit grave human rights abuses or plunder their countries for personal gain,” Treasury Under Secretary Sigal Mandelker said at an April 2019 speech on Holocaust remembrance at the U.S. Capitol. “Our objective is to change behavior, inspire democracy and freedom, and disrupt the ability of kleptocrats, human rights abusers, and others from stealing the wealth of their country.”

She cited a “great tradition” of human rights work at the Treasury going back to sanctions on Nazi-occupied Europe during World War II.

U.S. sanctions are legally supposed to have exceptions for trading food and medicine, but critics argue that the paperwork hurdles and general economic damage caused by sanctions cut off civilians from basic necessities anyways.

State Department officials often counter that sanctioned countries are still able to receive donations even if they are cut off from international markets.

The debate became especially urgent during the coronavirus pandemic in February 2020, when Iranian officials claimed that banking sanctions were preventing them from paying for virus test kits.

As the outbreak went on, Tehran mayor Piruz Hanachi said that the sanctions-induced economic crisis was preventing him from imposing a full lockdown on Iran’s largest city.

Democratic members of Congress urged the Trump administration to ease the economic pressure on Iran—and even allow for a $5 billion emergency international loan—in order to aid the country’s emergency response.

The State Department refused to entertain the idea, arguing that “sanctions are not preventing aid from getting to Iran” and Iran’s “grossly incompetent and deadly governance” is instead to blame for any loss of life.

The sanctions debate re-emerged in April 2020, as the Trump administration prepared to enforce the Caesar Act, a human rights law that imposes sanctions on Syrian regime officials as well as Syria’s reconstruction industry.

Kurdish-led forces argued that the new sanctions—combined with previous sanctions on Syrian oil—would cause an economic crisis and serve as a body blow to their U.S.-backed rebel government in northeast Syria.

But the Trump administration insists that the sanctions only affect Syrian government officials, not the broader Syrian economy.

“The Caesar Act and other U.S. Syria sanctions do not target humanitarian assistance for the Syrian people or hinder our stabilization activities in northeast Syria,” Secretary of State Mike Pompeo added in a June 17 statement, as the first Caesar Act sanctions took effect.

Gabbard’s amendment aims to settle these debates—and debates over other sanctions—once and for all.

And it could change the way Congress and the President wield America’s financial power in the future.

“[E]ven if the overwhelming majority of the amendment was focused on the supposed benefits, it is still a 100 percent victory for humanitarians concerned about sanctions,” Sperling wrote in a text message.

“In fact, it will be interesting to read [the President’s] attempts to explain how broad sanctions have empowered the Cuban and North Korean people and loosened these governments’ six-decade grip on power,” he added.