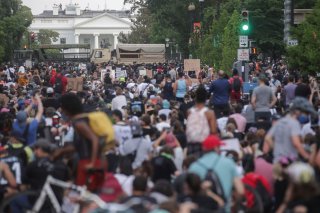 The Turkish government attempted to tie Kurdish militants to recent unrest in the United States over the killing of unarmed African-American citizen George Floyd.

U.S. President Donald Trump has blamed a loose network of left-wing activists called Anti-Fascist Action for violent clashes at U.S. protests in the wake of Floyd’s death. Turkey seized on his comments to claim that the U.S.-backed Kurdish-led militias in Syria were training terrorists to attack U.S. soil, an allegation the Kurds deny.

“A section of the public has held Antifa responsible for the acts of violence in protests that have going on [sic] in USA since May 26,” states a graphic released by the Turkish Directorate of Communications on social media on Wednesday. “News reports appeared in the international press that Antifa was trained by terrorist organizations in northern Syria.”

The graphic claimed that activists “trained” by the Kurdistan Workers Party (PKK) and People’s Defense Units (YPG) “do not hesitate to carry out acts with an entirely fascist mentality.”

The PKK is considered a terrorist group by the U.S. government, but the YPG is part of the U.S.-backed Syrian Democratic Forces. Several dozen Americans have also joined the YPG as volunteers in the fight against ISIS.

Turkey fought a ground war against the YPG and Syrian Democratic Forces in October 2019, after convincing Trump to remove U.S. peacekeepers from the area. The Trump administration is continuing diplomatic efforts to bring the two sides together.

The Turkish government’s claims about Antifa seem to be a ploy to drive a wedge between the Trump administration and the Syrian Democratic Forces.

Trump had said that “professional anarchists, violent mobs, arsonists, looters, criminals, rioters, Antifa, and others” were committing “acts of domestic terror” in a Monday speech on the growing unrest in U.S. cities.

Commentators close to Turkey’s ruling party have since tried to drum up the alleged links between these “professional anarchists” and the YPG. The Turkish government itself embraced that line with its Wednesday graphic, which featured an unsourced photo of fighters holding the flags of Antifa and the YPG together.

Hundreds of left-wing foreign volunteers are known to have joined the YPG during the war against ISIS.

But foreign fighters who participated in the war against ISIS dispute the idea that the YPG was training Antifa to threaten American society.

Guy Steward, a self-described “internationalist” who traveled from New York to fight in northeast Syria, had said in 2017 that the first wave of foreign volunteers “was split between ex-military people and leftists.”

He told the National Interest in a Wednesday text message that Turkey’s latest claims are “typical,” but the country’s “moral high ground is dubious at best to accurately describe who is and who isn’t a terrorist.”

Steward accused the Turkish government of harboring ISIS and Al Qaeda members. Tens of thousands of ISIS fighters are known to have traveled through Turkish soil, but Turkey denies knowingly harboring the militants.

“Antifa is not a terrorist organization nor is it even an organization,” he said. “If Antifa scenesters were a great help to the fight against ISIS, it was despite being an Antifa hipster, not because of it.”

“Are we meant to believe that YPG had the time to train people on how to [defecate] in a fish pond or how to draw penises on the side of a church building?” Amos added.

The George Floyd Tragedy Is Part of a Bigger National Problem