Is Turkey Capable of Defeating ISIS in Syria? 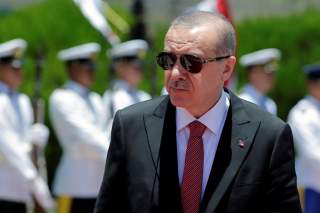 The Islamic State exploded in the Middle East, gaining control of large sections of Iraq and Syria. No nation was safe from its ambition to create an Islamic caliphate. But Turkey initially accommodated Daesh, even profiting from illicit oil sales. Eventually, the insurgents turned terrorist inside Turkey, forcing the Erdogan government to respond. However, Turkish forces still targeted Kurdish militias as the true threat.

With President Donald Trump apparently planning an American withdrawal from Syria, the administration suggested that Turkey take over the task of finishing off ISIS. Ankara’s response? Maybe if the United States does most of the work.

Reported the Wall Street Journal: “Turkey is asking the U.S. to provide substantial military support, including airstrikes, transport and logistics, to allow Turkish forces to assume the main responsibility for fighting Islamic State militants in Syria.” These demands, added the paper, “are so extensive that, if fully met, the American military might be deepening its involvement in Syria.”

Given these requests, one would assume Turkey to be a military midget, a featherweight drafted to take on a heavyweight champion. However, until recently, when NATO began to accept the real equivalents of the Duchy of Grand Fenwick—Montenegro, Albania, Croatia, Slovenia and soon Macedonia—new members were expected to contribute to the alliance’s defense. Turkey was hailed as an indispensable ally, locking down NATO’s southeastern front against the Soviet Union/Russia and guarding against Middle Eastern instability.

Ankara spends about $8 billion annually on its military. The International Institute for Strategic Studies observed that “The armed forces are capable and aim to provide a highly mobile force able to fight across the spectrum of conflict.” Turkey has about 355,000 active duty military personnel and another 379,000 reservists. The military has experience fighting insurgents, having conducted a lengthy, brutal, dirty war against the Kurdistan Workers’ Party, or PKK, which recently flared again.

Now Turkey’s armed forces are prepared to wipe out the Syrian Kurdish forces, the People’s Protection Units, or YPG. But when it comes to ISIS, well, says Ankara, would Washington please be so kind as to transform and upgrade its military?

The Journal noted that “Three U.S. military officials cited a widespread view that the Turks couldn’t replicate the role that the American military played in Syria against the Islamic State.” But who believes that they should do so? Daesh is a shadow of its former self, against which the United States launched its campaign. Acting like the global superpower is not necessary for Ankara to defeat the Islamic State.

Anyway, Turkey does not want to see a revived ISIS. While Ankara is more concerned about Kurdish forces, Daesh launched terrorist attacks against Turks. If the group again expands and consolidates its gains, Turkey is likely to end up on the ISIS target list. President Recep Tayyip Erdogan’s December offer to take over the anti-Daesh fight might have been a cynical ploy to win U.S. aid. Or it might have reflected a genuine desire to help stabilize the Middle East by killing off a dangerous revolutionary group. No matter. Daesh poses a threat.

Without American aid, Turkey might not initially be as good at seeking and finding the remnants of the once expansive caliphate. However, the Turks would learn by doing. And they would not be fighting one of mankind’s most formidable fighting forces. The Islamic State benefited from the poor quality of its opponents, especially the Iraqi military. Moreover, warned Tom Rogan, a Washington Examiner columnist, were Washington to provide the requested aid the Turks would “almost certainly manipulate those platforms to target the U.S.-allied Kurdish YPG militias well as ISIS.” The Kurds remain Ankara’s principal focus.

The most basic point, though, may be the fact that there is no need for the United States to choreograph the end of the conflict. Washington need not nail down a commitment from Turkey or anyone else to act. Rather, the United States need only make clear that Washington will not act. That would put a premium on other governments reaching a modus vivendi leading to the elimination of Daesh.

The Islamic State is the enemy of every country, every movement, and even every terrorist group, such as Al Qaeda. Countries that had left the problem to others, namely America, would have to recalibrate. They are capable of responding, as did Ankara to the perceived Kurdish threat.

Damascus’ de facto victory in the civil war has freed up its military, backed by Iran and Russia, to eradicate the Islamic State, retaking areas coveted by the Assad government. Egypt already has been affected by ISIS, most dramatically the slaughter of Egyptian workers in Libya and attacks in the Sinai, carried out by the Islamic State or groups claiming loyalty to it.

The Gulf countries too, could contribute. They have been making overtures to Syria’s Assad. The United Arab Emirates, for instance, recently reopened its embassy in Damascus. The UAE and Saudi Arabia also originally contributed to the anti-Daesh campaign, before shifting to Yemen after the United States took command of the anti-ISIS campaign. They would be welcomed back as well. Others with an incentive to prevent ISIS’s revival are Jordan and Israel.

President Erdogan’s pledge to eradicate ISIS followed by expansive demands for aid looks like yet another attempt to play Washington. Even “allies” consistently believe they should do nothing freely when America can be manipulated into doing or funding it. The Europeans, Saudis and South Koreans all have perfected this technique. Now Ankara is giving it a try.

The Trump administration should follow through on the president’s rhetoric about making allies pay. The first responders in the case of a threat like ISIS should be those nations most affected. Together they could and should eliminate what remains of the physical caliphate without expecting Washington to do the job for them.