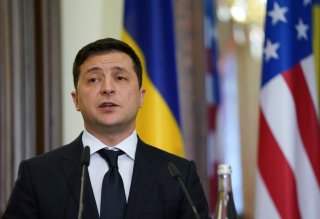 U.S. officials have long been fond of portraying Ukraine as a plucky democracy fending off the menace of aggression from an authoritarian Russia.  Washington’s idealized image has never truly corresponded with the murkier reality, but the gap has now become a chasm.  Several actions that President Volodymyr Zelensky’s government has taken in recent months are alarmingly authoritarian.  Treating Ukraine as a useful (much less, an essential) U.S. security partner cannot be justified on the basis of realist calculations and is needlessly provocative toward Russia.  Trying to portray Ukraine as a model democracy deserving U.S. protection on moral grounds is even more far-fetched.  Indeed, attempting to do so reflects either willful blindness or the worst sort of cynicism.

There has been a fraudulent element to Washington’s policy ever since Barack Obama’s administration backed Ukraine’s so-called Maidan Revolution in 2014.  Administration officials, most notably Assistant Secretary of State Victoria Nuland and U.S. Ambassador to Ukraine Geoffrey Pyatt, encouraged and aided demonstrators who sought to overthrow the duly elected, but pro-Russia, government.  U.S. leaders insisted that the revolution was a spontaneous, pro-democracy uprising by Ukrainians opposed to President Viktor Yanukovych’s corrupt rule, even though Washington’s fingerprints were all over the campaign.

The administration and its allies in the Western news media conveniently ignored other ugly aspects of the “democratic” revolution.  Although there were genuine democrats in the demonstrations, there were also armed ultranationalist and even outright fascist elements, such as Svoboda and Right Sector, which played crucial roles.  After the revolution, those factions continued to be a troubling presence in the “new, democratic Ukraine.”  The neo-Nazi Azov Battalion, for example, was an integral part of President Petro Poroshenko’s military and security apparatus.

Ultranationalist and anti-Semitic incidents by extremist groups on the streets of Kiev and other cities became far too common in the years following the Maidan Revolution.  The Poroshenko government’s own policies also exhibited an increasingly authoritarian aspect.  Ukrainian officials harassed political dissidents, adopted censorship measures, and barred foreign journalists they regarded as critics of the government and its policies.

As bad as the situation was under Poroshenko, however, it has grown even worse under his successor, Zelensky.  In early February 2021, the Ukrainian government closed several pro-Russia, independent media outlets, and did so on the basis of utterly vague, open-ended standards.  On May 13, 2021, a Ukrainian court ordered prominent pro-Russian politician Viktor Medvedchuk, a political ally of the owner of those television stations, to be put under house arrest while he faced allegations of treason.  Medvedchuk, leader of the Opposition Platform - For Life political party, is one of Zelensky’s most outspoken critics.  Prosecutors had earlier accused him of engaging in “subversive activities against Ukraine, including in the economic sphere,"

Medvedchuk is hardly the only target of an increasingly ugly political crackdown.  In mid-April, Ukraine’s state security service detained 60 demonstrators in the city of Kharkiv who sought to protest actions by the local city council.  The authorities did not accuse the protestors of engaging in violence; indeed, there was no evidence of such behavior.  Instead, the state security service alleged that “pro-Russian political forces” had sent the demonstrators to stage protests as a way to "justify possible acts of Russian aggression against Ukraine."  One could include almost any political activity under the rubric of such a vague, emotionally charged allegation.

The Maidan Revolution alumni now seem to be trying to devour even some of their own members.  In mid-May, Kiev mayor Vitali Klitschko charged agents of the SBU, Ukraine’s state security agency, had come to his apartment in what he denounced as a continuing attempt by his political rival, Zelensky, to put pressure on him.  Earlier in May, the SBU, the state prosecutor's office, and police carried out large-scale searches of various units of the Kiev city government, accusing the local authorities of misappropriation of budget funds and tax evasion, among other offenses.  Although Klitschko was one of the original leaders of the Maidan demonstrations, Zelensky apparently now regards him as an annoying rival, since the Kiev mayor was a close ally of former president Poroshenko.

Such actions are hard to square with the U.S. foreign policy blob’s portrayal of Ukraine as a vibrant, tolerant democracy. Typical of the idealized image was the version offered by William Taylor during House impeachment hearings against President Donald Trump.  Taylor had served as interim U.S. ambassador to Kiev, and he clearly was fond of both the Maidan Revolution and the government it birthed.  According to Taylor, Ukrainian leaders sought to create “an inclusive, democratic nationalism, not unlike what we in America, in our best moments, feel about our country.”

The real Ukraine far more closely resembles the illiberal, pseudo-democratic systems that we have seen emerge in Russia, Hungary, Turkey, and other countries than it does the United States.  It is reckless to treat Ukraine as a U.S. ally on strategic grounds, and it is morally offensive to do so on the basis of alleged democratic solidarity.  The Biden administration should jettison this increasingly odious client state as soon as possible.

Ted Galen Carpenter, a senior fellow in security studies at the Cato Institute and a contributing editor at the National Interest, is the author of 12 books and more than 900 articles on international affairs.