Understanding the Failure of U.S. Foreign Policy: The Albright Doctrine 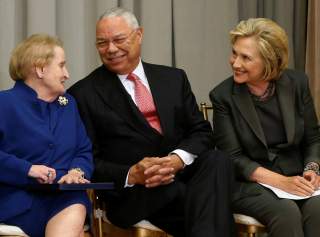 How to describe U.S. foreign policy over the last couple of decades? Disastrous comes to mind. Arrogant and murderous also seem appropriate.

Since 9/11, Washington has been extraordinarily active militarily—invading two nations, bombing and droning several others, deploying special operations forces in yet more countries, and applying sanctions against many. Tragically, the threat of Islamist violence and terrorism only have metastasized. Although Al Qaeda lost its effectiveness in directly plotting attacks, it continues to inspire national offshoots. Moreover, while losing its physical “caliphate” the Islamic State added further terrorism to its portfolio.

Three successive administrations have ever more deeply ensnared the United States in the Middle East. War with Iran appears to be frighteningly possible. Ever-wealthier allies are ever-more dependent on America. Russia is actively hostile to the United States and Europe. Washington and Beijing appear to be a collision course on far more than trade. Yet the current administration appears convinced that doing more of the same will achieve different results, the best definition of insanity.

Despite his sometimes abusive and incendiary rhetoric, the president has departed little from his predecessors’ policies. For instance, American forces remain deployed in Afghanistan and Syria. Moreover, the Trump administration has increased its military and materiel deployments to Europe. Also, Washington has intensified economic sanctions on Cuba, Iran, North Korea, and Russia, and even penalized additional countries, namely Venezuela.

First is overweening hubris. In 1998 Secretary of State Albright declared that “If we have to use force, it is because we are America: we are the indispensable nation. We stand tall and we see further than other countries into the future, and we see the danger here to all of us.”

Even then her claim was implausible. America blundered into the Korean War and barely achieved a passable outcome. The Johnson administration infused Vietnam with dramatically outsize importance. For decades, Washington foolishly refused to engage the People’s Republic of China. Washington-backed dictators in Cuba, Nicaragua, Iran, and elsewhere fell ingloriously. An economic embargo against Cuba that continues today helped turn Fidel Castro into a global folk hero. Washington veered dangerously close to nuclear war with Moscow during the Cuban Missile Crisis in 1962 and again two decades later during military exercises in Europe.

U.S. officials rarely were prepared for events that occurred in the next week or month, let alone years later. Americans did no better than the French in Vietnam. Americans managed events in Africa no better than the British, French, and Portuguese colonial overlords. Washington made more than its share of bad, even awful decisions in dealing with other nations around the globe.

Perhaps the worst failing of U.S. foreign policy was ignoring the inevitable impact of foreign intervention. Americans would never passively accept another nation bombing, invading, and occupying their nation, or interfering in their political system. Even if outgunned, they would resist. Yet Washington has undertaken all of these practices, with little consideration of the impact on those most affected—hence the rise of terrorism against the United States. Terrorism, horrid and awful though it is, became the weapon of choice of weaker peoples against intervention by the world’s industrialized national states.

The U.S. record since September 11 has been uniquely counterproductive. Rather than minimize hostility toward America, Washington adopted a policy—highlighted by launching new wars, killing more civilians, and ravaging additional societies—guaranteed to create enemies, exacerbate radicalism, and spread terrorism. Blowback is everywhere. Among the worst examples: Iraqi insurgents mutated into ISIS, which wreaked military havoc throughout the Middle East and turned to terrorism.

Albright’s assumption that members of The Blob were far-seeing was matched by her belief that the same people were entitled to make life-and-death decisions for the entire planet. When queried 1996 about her justification for sanctions against Iraq which had killed a half million babies—notably, she did not dispute the accuracy of that estimate—she responded that “I think this is a very hard choice, but the price—we think the price is worth it.” Exactly who “we” were she did not say. Most likely she meant those Americans admitted to the foreign policy priesthood, empowered to make foreign policy and take the practical steps necessary to enforce it. (She later stated of her reply: “I never should have made it. It was stupid.” It was, but it reflected her mindset.)

In any normal country, such a claim would be shocking—a few people sitting in another capital deciding who lived and died. Foreign elites, a world away from the hardship that they imposed, deciding the value of those dying versus the purported interests being promoted. Those paying the price had no voice in the decision, no way to hold their persecutors accountable.

The willingness to so callously sacrifice so many helps explain why “they” often hate us, usually meaning the U.S. government. This is also because “they” believe average Americans hate them. Understandably, it too often turns out, given the impact of the full range of American interventions—imposing economic sanctions, bombing, invading, and occupying other nations, unleashing drone campaigns, underwriting tyrannical regimes, supporting governments which occupy and oppress other peoples, displaying ostentatious hypocrisy and bias, and more.

This mindset is reinforced by contempt toward even those being aided by Washington. Although American diplomats had termed the Kosovo Liberation Army as “terrorist,” the Clinton Administration decided to use the growing insurgency as an opportunity to expand Washington’s influence. At the 1999 Rambouillet conference Albright made demands of Yugoslavia that no independent, sovereign state could accept: that, for instance, it act like defeated and occupied territory by allowing the free transit of NATO forces. Washington expected the inevitable refusal, which was calculated to provide justification for launching an unprovoked, aggressive war against the Serb-dominated remnant of Yugoslavia.

However, initially the KLA, determined on independence, refused to sign Albright’s agreement. She exploded. One of her officials anonymously complained: “Here is the greatest nation on earth pleading with some nothingballs to do something entirely in their own interest—which is to say yes to an interim agreement—and they stiff us.” Someone described as “a close associate” observed: “She is so stung by what happened. She’s angry at everyone—the Serbs, the Albanians and NATO.” For Albright, the determination of others to achieve their own goals, even at risk to their lives, was an insult to America and her.

Alas, members of the Blob view Americans with little more respect. The ignorant masses should do what they are told. (Former National Security Adviser H.R. McMaster recently complained of public war-weariness from fighting in Afghanistan for no good reason for more than seventeen years.) Even more so, believed Albright, members of the military should cheerfully patrol the quasi-empire being established by Washington’s far-sighted leaders.

As Albright famously asked Colin Powell in 1992: “What’s the use of having this superb military you’re always talking about if we can’t use it?” To her, American military personnel apparently were but gambit pawns in a global chess game, to be sacrificed for the interest and convenience of those playing. No wonder then-Chairman of the Joint Chiefs of Staff Colin Powell’s reaction stated in his autobiography was: “I thought I would have an aneurysm.”

When asked in 2003 about the incident, she said “what I thought was that we had—we were in a kind of a mode of thinking that we were never going to be able to use our military effectively again.” Although sixty-five years had passed, she admitted that “my mindset is Munich,” a unique circumstance and threat without even plausible parallel today.

Such a philosophy explains a 1997 comment by a cabinet member, likely Albright, to General Hugh Shelton, then Chairman of the Joint Chiefs of Staff: “Hugh, I know I shouldn’t even be asking you this, but what we really need in order to go in and take out Saddam is a precipitous event—something that would make us look good in the eyes of the world. Could you have one of our U-2s fly low enough—and slow enough—so as to guarantee that Saddam could shoot it down?” He responded sure, as soon as she qualified to fly the plane.

For Albright, war is just another foreign policy tool. One could send a diplomatic note, impose economic sanctions, or unleash murder and mayhem. No reason to treat the latter as anything special. Joining the U.S. military means putting your life at the disposal of Albright and her peers in The Blob.

Anyone of these comments could be dismissed as a careless aside. Taken together, however, they reflect an attitude dangerous for Americans and foreigners alike. Unfortunately, the vagaries of U.S. foreign policy suggest that this mindset is not limited to any one person. Any president serious about taking a new foreign-policy direction must do more than drain the swamp. He or she must sideline The Blob.