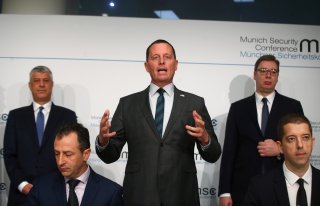 Grenell has held a variety of high-level positions in the Trump administration, including U.S. Ambassador to Germany and acting Director of National Intelligence. He left both posts at the end of May 2020, but stayed in government part-time as Special Presidential Envoy for Serbia and Kosovo Peace Negotiations.

In the meantime, Grenell has been a prolific commenter on the 2020 elections, taking aim at the LGBT group Victory Fund and the National Iranian-American Council (NIAC) over their support for Democratic candidates.

Republicans have often targeted NIAC over its stance on U.S.-Iranian relations, with several Republican senators accusing the group of serving as an unregistered foreign agent in a January 2020 letter.

NIAC has denied any connection to the Iranian government. Iranian hardliners have often accused NIAC of promoting pro-American views.

“Honored to have to [sic] this racist wingnut question my loyalty as an American,” wrote NIAC president Jamal Abdi in a Twitter post soon after. “So sorry you didn’t get your war.”

Grenell shot back that Abdi should “[s]top gay-bashing” him. Grenell was the first openly gay man to serve as Director of National Intelligence.

Dylan Williams, senior vice president at the left-leaning Jewish-American group J Street, called Grenell’s comment a “bigoted accusation of disloyalty against Iranian-Americans” in his own post.

“In normal times, a former acting head of U.S. intelligence so blithely attacking an American civil society organization would be a major issue,” Abdi wrote. “Today it has become par for the course in Trump’s America and just another lie to corrode the political process, disorient the public, and silence dissent.”

NIAC and J Street have both supported increased U.S. diplomatic engagement with Iran, including the international nuclear deal that President Donald Trump broke from in 2018.

The Democratic Party will call for a return to the deal and an end to “the Trump Administration’s race to war with Iran,” according to a draft of the party’s 2020 platform released on Tuesday night.

The draft can still be amended, but the language around Iran seems unlikely to change, as Democratic presidential nominee Joe Biden has publicly condemned the Trump administration’s “maximum pressure” campaign against Iran and promised to return to the nuclear deal.

Grenell has himself played a role in the pressure campaign—often with his bombastic Twitter posts.

“US sanctions will target critical sectors of Iran’s economy,” he wrote within hours of taking up his post as U.S. Ambassador to Germany. “German companies doing business in Iran should wind down operations immediately.”

Grenell’s personal website, taken down in 2018, once touted his consulting work for clients in Iran.

The White House and State Department have not responded to a request for comment as of press time.