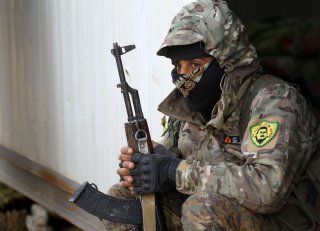 The top U.S. commander in the Middle East said that Turkey has “legitimate security interests” in fighting back against the Kurdistan Workers Party, but said that Turkish military operations have caused “friction.”

The left-wing Kurdish rebel group, also known as the PKK, has fought a decades-long insurgency against the Turkish government and is considered a terrorist organization by the United States.

But the United States is also backing the Syrian Democratic Forces, a Kurdish-led coalition in Syria that Turkey considers an extension of the PKK, which has strained U.S.-Turkish relations.

“We agree that the PKK has been a terrorist organization, has attacked the Turks,” General Kenneth McKenzie, head of U.S. Central Command, said at a Wednesday video conference hosted by the U.S. Institute of Peace. “We share a different view of the SDF. We don’t believe that they are one and the same.”

The general also raised concerns about the ongoing Turkish military campaign in northern Iraq, which Turkey says is meant to drive out the PKK.

“At the same time, Turkey does have, as I’ve said before, legitimate national security concerns,” McKenzie added. “They’re going to address those concerns.”

The general claimed that he and U.S. European Command commander General Todd Wolters “have a good continual dialogue with the Turks.”

Turkey has attacked alleged PKK positions in Iraq for decades, and invaded the Kurdish-majority Syrian territory of Afrin in early 2018 to drive out the SDF.

But the United States began efforts to prevent a Turkish-Kurdish conflict in Syria beginning in late 2018, negotiating for a “safe zone” along the Syrian-Turkish border that would prevent any further fighting.

The Trump administration suddenly reversed course in October 2019, throwing the gates open for a Turkish invasion of Syria.

McKenzie emphasized that the Turkish government does have real reasons to be worried about Syria.

“Bottom line would be, we do recognize that Turkey has concerns about what flows over the border into metropolitan Turkey, and what goes on in Syria and other parts of the theater,” he concluded.