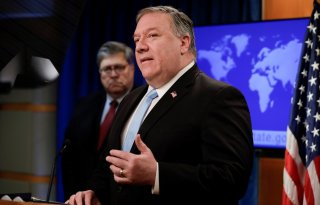 The commander of U.S. forces in the Middle East said that there is “actually no military component” to the maximum pressure campaign against Iran, reversing comments made by Secretary of State Mike Pompeo in January.

U.S. forces killed Iranian spymaster Maj. Gen. Qassim Suleimani as he arrived in Baghdad on January 3, kicking off a round of direct U.S.-Iranian clashes.

Pompeo advertised the assassination as part of his signature “maximum pressure” campaign, which is aimed at forcing Iran to change a host of its domestic and foreign policies.

But Gen. Kenneth McKenzie, head of U.S. Central Command, pulled back Pompeo’s claims during a speech at the Middle East Institute last week.

“We actually do not directly contribute to the maximum pressure campaign,” said the four-star general, who commands U.S. forces in the Middle East and Central Asia. “Instead, what our responsibility is as U.S. Central Command, is to deter Iran from taking actions either directly or indirectly against the United States or our allies and partners in the region.”

State Department officials have sold the killing of Suleimani as a way to “restore deterrence” against Iran.

McKenzie warned that Iran could act “either directly or indirectly against the United States or our allies and partners in the region” in retaliation to diplomatic and economic pressure.

But he was clear that “there's actually no military component of what's known as the maximum pressure campaign.”

Suleimani’s killing and the Iranian retaliation was the last direct confrontation between Iranian and U.S. forces. Congress voted to restrain President Donald Trump’s war powers soon after, sending a signal that the U.S. public would not endorse any further military escalation.

Iranian and U.S. forces have clashed several times since the beginning of the maximum pressure campaign, before and after Suleimani’s death.

U.S. naval forces began massing in the Persian Gulf in the summer of 2019 after several oil tankers exploded off the coast of Iran. Iranian forces shot down a U.S. surveillance drone they say entered Iranian airspace, and Trump came within minutes of ordering an armed retaliation.

Iranian-backed Iraqi militias were blamed for a rocket attack that killed an American translator in December 2019, causing a spiral of escalation that culminated in the Suleimani killing. Iran then launched ballistic missiles at a U.S. airbase in western Iraq, injuring over 100 troops.

Iraq’s parliament has asked U.S. forces to leave the country in light of the U.S.-Iranian clashes.

More rockets struck a U.S. base last week as Iraqi and U.S. officials met for a strategic dialogue, where the two countries agreed on the need to withdraw U.S. troops from Iraq.

McKenzie, however, maintained that killing Suleimani has deterred Iran from further action.

“I would assess that right now we're in a period of what I would call contested deterrence with Iran,” he said. “I think the Iranians have had to recalculate because they did not believe that we would actually take that action.”